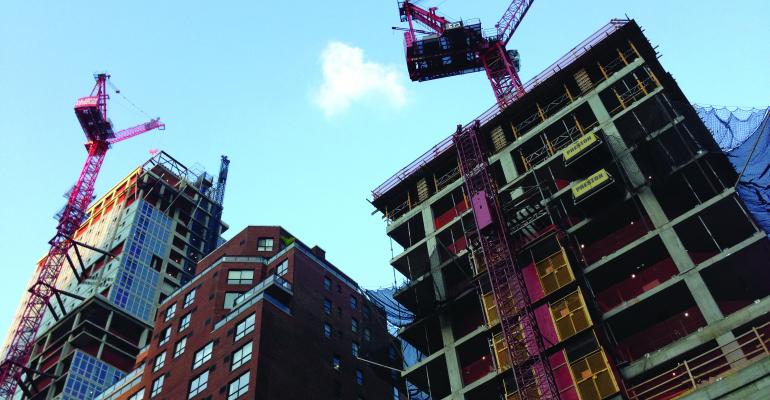 The cities where developers are opening the most new apartments are handling the new supply pretty well, at least for now.

But developers aren’t finished. Even as they race through an incredibly busy year for new construction, apartment developers are now planning even more new projects. They still often choose to start construction in the same cities and the same submarkets within those cities where they have been busy building since 2010. “We’re tending to continue to build most heavily in the same spots,” says Willett.

Banks seem very willing to finance these new developments. “You will have a number of lenders offering financing—no matter where,” says Michael Riccio, co-head of national production for CBRE Capital Markets. That includes nearly all property markets—with the possible exception of more troubled markets like Houston and Washington, D.C. “Houston might be the outlier.”

So far, the news is good from many apartment markets where developers have built large numbers of new apartments relative to market’s inventory of existing apartments. The towns that have best handled a lot of new construction include Denver, Colo.; Seattle and Charlotte, N.C., according to MPF Research, a division of RealPage.

“Charlotte, in fact, may be the real surprise performer on this list. The metro is dealing with a lot of new supply stunningly well,” says Willett. Occupancy rates and rent growth in Charlotte remain notably stronger than the historical norm. “That performance speaks to the strength of Charlotte’s overall economy, the favorable characteristics of the metro’s renter base, and the general upward movement of this locale in terms of overall desirability as an apartment investment choice.”

Out of the top 10 metro markets where developers are building the most new apartments, relative to the existing industry, only Houston seems to have been seriously damaged.

In Houston, rents for class-A apartments only grew 1.8 percent over the last year, compared to 5.2 percent per year on average over that last three years. Another 32,000 apartments are still under construction, according to Willett. There’s a real possibility that average rents may fall at the top end of the market over the next 12 to 18 months. “Construction activity is only part of the story,” says Willett. Economic growth generally and job production specifically have fallen in Houston with the price of oil. 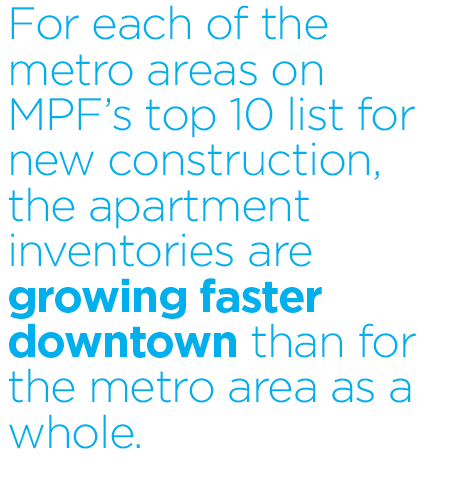 Developers continue to start in construction projects in same places where they have already built many new apartments. Charleston, S.C.; Nashville, Tenn.; Austin, Texas, and Charlotte top MPF’s list of the top 10 metro markets, even though they have already absorbed thousands of completed new apartments. Houston comes in eighth on MPF’s top 10 list, with many projects that started construction before the crash in the price of oil.

Developers also continue to start projects in same submarkets—often downtown. About a third of all new apartment construction is being built downtown, according to data from CoStar.

For each of the metro areas on MPF’s top 10 list for new construction, the apartment inventories are growing faster downtown than for the metro area as a whole. That’s creating huge changes for these downtown areas—many of which did not have many apartments before the last few years. The scale of this new construction downtown could create problems, since downtown apartments tend to be luxury high-rise projects that are expensive to build and that relatively few potential renters can afford.

“We are starting to see vacancies tick up in downtowns across the country,” says Jay Parsons, director of analytics and forecasts for MPF Research at RealPage.

Developers are relying less on downtown as they plan future projects—though they are still disproportionately focused on downtown markets. “The urban core submarkets generally now account for less of total ongoing construction than they did two to three years ago,” say Willett. “That’s an encouraging shift.” 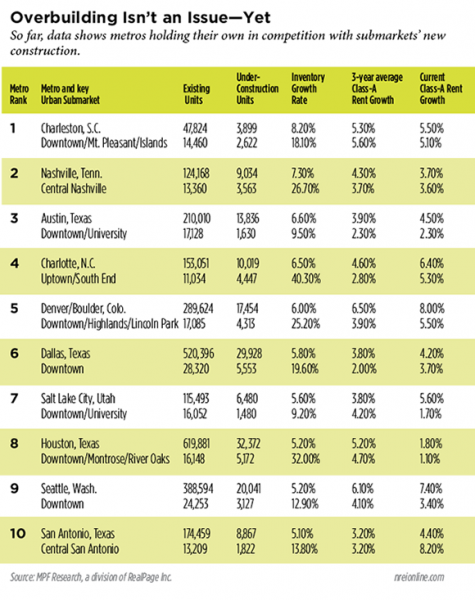