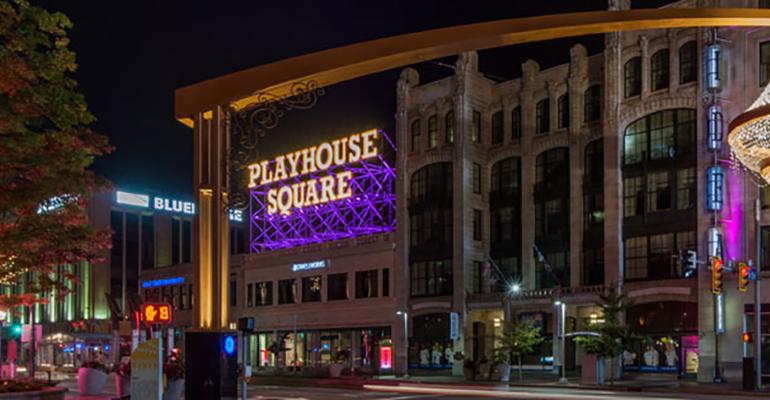 (Bloomberg)—Taxpayers will be subsidizing a luxury apartment in Cleveland that’s complete with a yoga studio, fire pits, pool and grill areas.

Not-for-profit Playhouse Square Foundation, which just hosted Disney’s Aladdin and will soon be home to Broadway musical Hamilton, is using some of a tax-exempt, $80 million junk-bond offering to finance a $138.9 million, 34-story apartment tower. Once it opens in 2020, the Lumen will have 318 apartment units (including 12 penthouse units) and a parking garage as well as other amenities like a concierge entrance and fitness center, according to bond offering documents.

Though tax-exempt municipals often finance affordable housing projects, it’s rare for debt with a tax break to finance luxury apartment buildings. The bonds will be sold through a local authority and the proceeds will be loaned to Playhouse Square, a non-profit company that will be responsible for repaying the debt.

The speculative bond deal is likely to fetch strong interest from buyers who have flocked to high-yield municipal funds. After releasing information about the bond sale, at least two investors contacted the foundation and are coming to Cleveland to visit later this week, Art Falco, chief executive officer of Playhouse Square, said in an interview.

The apartment complex will be located a short walk away from the foundation’s center for TV and radio stations, theaters, art galleries, and the ballpark for the Cleveland Indians baseball team.

Playhouse Square got its start during a movement four decades ago to save theaters built in the 1920s that were going to be bulldozed as television hurt the live-performance industry. The foundation now owns and operates 11 performance spaces, hosting more than 1,000 events with 1 million attendees in fiscal 2017, according to bond offering documents. It had $70.5 million in revenue in the most recent year, with most of that coming from theater tickets.

Playhouse Square helped build a hotel in the 1990’s and owns several offices in downtown Cleveland. It has a "full service" real estate services division that manages its properties.

"What we found was that we had to become a leader in some of these developments in order to see them to reality," Falco said.

Falco said he views the luxury apartment project as a "working endowment" that will provide the foundation with a small return on its investment.

"It’s not dissimilar to taking some funding and investing it in the stock market as an endowment would do," he said. The foundation, which has a $24.1 million endowment as of fiscal 2017, has received $95.3 million in pledges for a $100 million fundraising campaign it started in 2014, according to bond offering documents.

While the foundation has a proven track record, it has little experience with residential property management, S&P Global Ratings analysts said in a report this month. The center’s work with both performing arts and real estate makes it unique, said analyst Gauri Gupta. The real estate arm adds to the diversification of its revenue stream, which is a positive, she said.

Risks facing investors include the foundation losing its "current national, regional and local reputation as a leading producer and presenter of the performing arts," according to initial offering documents. The bonds will be a general obligation of the foundation, the S&P report says.

The developer is optimistic, with almost 100 people already expressing interested in the apartments, Falco said. "We feel that the project is going to be successful," he said.