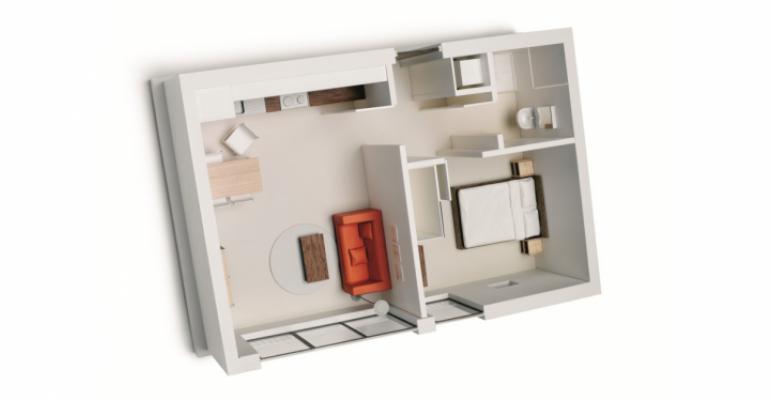 They’re built for one person. There's only a shower, no bathtub allowed or they violate minimum size regulations. And if the concept works, its deep-pocketed New York backer may try to export the model.

These flats from Pocket Living were hailed this week by the new British housing minister at the ruling Conservative Party’s conference as a way to give young people the chance to buy in an ever-tighter market and help ease a growing housing crisis. In England alone, some 300,000 new units need to be built each year to increase affordability, estate agents Savills estimates, but only about 200,000 go up.

Pocket is based in London but co-owned by Related Cos., the New York developer better known for jaw-dropping developments such as the Time Warner Center or a new building by the late starchitecht Zaha Hadid that features a $50 million penthouse adjacent to the High Line. (The penthouse designed by the Pritzker Prize–winner has five bedrooms and 6,853 square feet, enough space for more than 16 Pocket apartments.)

Pocket says it includes just enough space and amenities to make the apartment livable within 38 square meters (409 square feet), one meter larger than the minimum requirement for one person with no bathtub. (An apartment with sleeping space for two people requires 50 square meters, a regulation that’s practically impossible to enforce). The units have sold for between £165,000 ($204,000) and £300,000, priced at a discount to other one bedrooms in the neighborhood.

Related acquired a 50% stake in Pocket in February, a deal that valued the company at around £25 million, company officials said. Related, also behind the Hudson Yards development in Manhattan, says it started out financing affordable housing in the 1970s. Pocket is Related’s first foray into micro-apartments.

“We would love to see their ideas, if not their direct product, translate into other markets, into other cities,” Wong said. “The question of whether it fits into the building codes and whether the business can work ... is going to be the challenge.”

Steve Reed, a Labour party MP for an area in south London, said he visited a Pocket development and wasn't impressed.

“The smaller and smaller you make them, the more people you try to squeeze in, you’re kind of on a relentless path to systematic overcrowding,” he said. “I don’t think it’s good for people’s health and well being to live in circumstances like that.”

He says the real need he sees is for “proper sized homes” for families.

The U.K. government wants 1 million new homes to be built by 2020, a goal set by former Prime Minister David Cameron and retained by the current leadership.

The Pocket apartments may help, but so far the numbers are small. The company has built 276 homes, with another 326 under way and about 600 in the pipeline, said Lucian Smithers, Pocket’s director of sales and marketing. Some have been shoehorned in prime central London areas, such as Westminster and Camden, but those opportunities are shrinking.

“Increasingly we can’t buy land and make our scheme viable,” Smithers said. “There is a huge, huge pent-up demand for one-bedroom apartments.”

Under the terms of sale, buyers can’t earn more than £90,000, and the apartments are sold at a 20% discount to similar one-bedroom units within half a mile. The comparable properties might be larger, but Smithers says the extra space is usually wasted: a hallway nobody needs, for example.

Buyers must live or work in the area, and they can’t pay cash—with limited exceptions for people who, for example, can’t get a mortgage for religious reasons.

Once in, buyers can’t flip them for a quick profit, either. The same income and price constraints apply when the units are sold. No sublets or Airbnbs allowed. “We do fairly regular checks,” Smithers said. “If someone’s not playing by the rules, [another resident] normally gives us a call.”

Surveys show that people will go for a tiny apartment—if it’s in the right location with the right amenities, said Adam Challis, head of residential research at estate agents JLL.

After all, Challis said, the country will need more smaller units: People are buying later in life, and household sizes are shrinking.

“The big concern that, actually, many in the private market have in this space is the perception of delivering small units is, it must be crap,” Challis said.