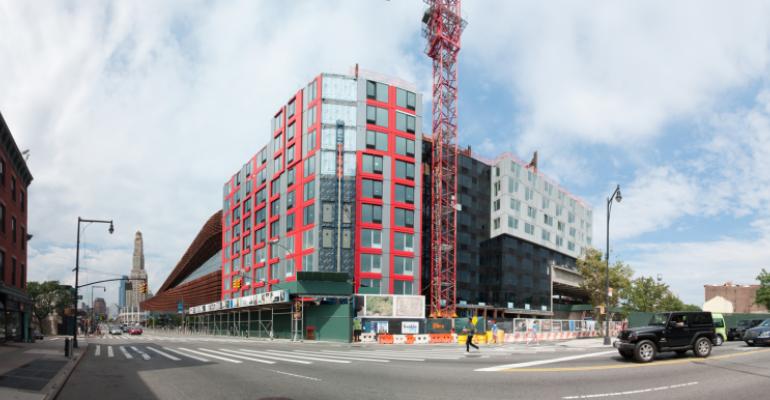 The 32-story tower at 461 Dean Street in Brooklyn, N.Y. is made almost entirely out of rectangular modules, each the size of a shipping container. When the first residents move in this fall, the apartment building will be the tallest modular building in the world.

More are coming. The executive who helped engineer the high-rise in Brooklyn has formed his own company, Full Stack Modular. Despite delays that bedeviled 461 Dean Street, Full Stack Modular has already signed up enough new clients to keep it busy into the next year creating new modular buildings. It’s a method of construction that is supposed to be significantly less expensive than conventional construction.

Those savings didn’t materialize at Dean Street. The apartment tower took four years to finish—much longer than anticipated—because of a disagreement between the developer, Forest City Ratner Cos., and construction firm Skanska. “The project stopped for a year because of the conflict… and the start up was slow,” says Roger Krulak, founder and CEO of Full Stack Modular.

Despite the delays at Dean Street, Krulak notes the modular technology worked well. “We were worried about the self-sealing façade, but they went in smoothly,” he says. The building’s elevators, another complicated technology for a modular building, operate well.

Developers can save a lot of money by building with modules, according to Krulak. “I would say to cost of modular construction is 80 percent of the cost of conventional construction,” he says.

That’s largely because modular construction is supposed to be faster than conventional development. Because the modules are created in a factory it’s possible for drywallers and electricians to be finishing up the interiors of a building while construction workers are still digging the foundation. Developers can also save on design expenses and insurance costs.

There’s also the cost of scaffolding, which can easily cost upwards of $2 million on large construction projects.

However, as Forest City argued with Skanska, its partner in the modular business, the developer switched the remaining towers at its Atlantic Yards site back to conventional construction. More recently, Forest City also decided to sell off non-core assets, like its new modular construction business, as it turned itself into a publicly-traded REIT.

"The sale allows us to put our focus on our core strengths,” says MaryAnne Gilmartin, Forest city president and CEO. “We are thrilled that the high-rise residential modular industry we launched will continue its groundbreaking innovations in the skilled hands of Roger Krulak. We know it will be a great success."

Krulak left Forest City to found Fall Stack Modular and in October, Full Stack announced its purchase of FC Modular from Forest City. The deal includes the long-term lease for the factory at the Brooklyn Navy Yard. Full Stack Modular will also maintain a groundbreaking collective bargaining agreement with the Building and Construction Trades Council of New York and its members, and plans to rehire much of the original workforce responsible for 461 Dean Street.

Full Stack is now finalizing contracts to work with three development firms to complete projects in New York City. By next spring or summer, Full Stack plans to be producing 5,000 to 6,000 sq. ft. of modular space per week at the Brooklyn Navy Yards factory.