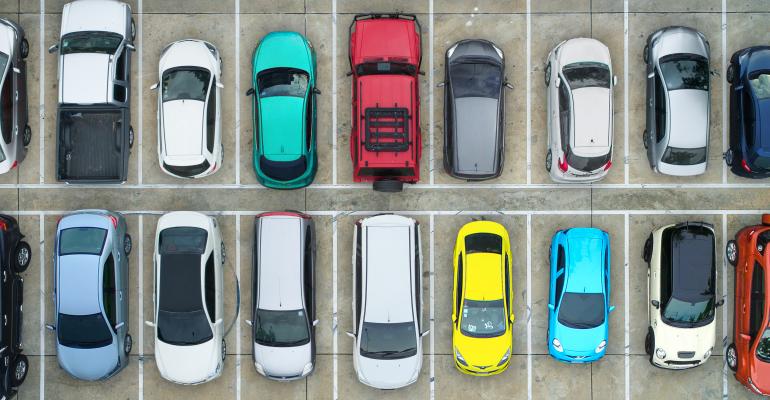 Great Parking Is Not Worth a Housing Crisis: Virginia Postrel

Removing parking requirements would be one of the simplest ways to ease California’s housing crisis.

(Bloomberg View)—In Los Angeles, it’s perfectly legal to build a new apartment without a refrigerator, a balcony, or air conditioning. But you can’t build one without plenty of parking. In most cases, in fact, you have to build at least two spaces per unit -- and no fudging with tandem or compact spaces. That makes housing much more expensive. Removing parking requirements would be one of the simplest ways to ease California’s housing crisis.

Adding an above-ground parking spot costs $27,000, just for construction, while an underground space runs around $35,000, according to 2014 estimates by UCLA planning professor Donald Shoup, author of “The High Cost of Free Parking.” That means the typical two-spot requirement adds between $52,000 and $70,000 to the cost of a new unit before a single two-by-four goes up. And that doesn’t include the land.

The estimate is also optimistic. It assumes that that the cost of adding parking spaces is linear -- that the tenth space costs the same as the fifth one -- when that’s often not the case. Shoup gives the real-life example of a standard-size L.A. parcel whose zoning allows eight apartments, with required parking of 2.25 spaces each, or 18 total. The lot is only big enough to accommodate 16 spaces on one level of underground parking. Going from seven to eight apartments thus means digging down another level, which is prohibitively expensive. So the builder settles for seven units. The parking requirement costs one more family a home.

Parking rules weren’t always so strict, of course. When I first moved to L.A. in 1986, my husband and I lived in a two-bedroom apartment with only one parking space. We thought nothing of it, since we only had one car. That place was built in 1960. It would be illegal to build today.

So would my 1975 condo, with its two tandem parking places, one in back of the other, requiring us to “switch the cars” when the wrong person needs to get out. Sure, sharing parking spaces is a pain, but it’s minor compared to having to pay more for a smaller home. Besides, I don’t drive that much.

Angelenos tend to assume that if the law doesn’t require builders to provide at least a couple of spaces per dwelling, cars will be endlessly circling the block looking for spots on the street. But that’s not the case.

In 1999, the city created a natural experiment with the Adaptive Reuse Ordinance, designed to encourage the transformation of vacant commercial buildings in the historic core into housing. Among other provisions, the ordinance exempted converted buildings from parking requirements. Developers couldn’t subtract parking, but they didn’t have to add it. “The law created a set of downtown buildings that faced the same market conditions as other properties -- the same amenities, crime levels, and transit access -- but that did not have minimum parking requirements,” writes UCLA planning professor Michael Manville in a study of the results. “The ARO therefore lets us compare what unregulated developers did with what they would have had to do if they were regulated.”

Manville estimates that between 1999 and 2008 developers created at least 6,900 new housing units in the exempted area, or more than three-quarters of those added in downtown L.A. And while the building conversions required other exemptions as well, the developers he interviewed said that “without removing the parking requirements, the conversions would have been impossible.”

What mattered, it turned out, was the flexibility the exemption provided. Some luxury buildings opted for more spots than required, upping the average, while one building provided no parking at all. Most important, the exemption allowed developers to rent parking off-site, sometimes in uncovered surface lots, instead of digging expensive garages. They met residents’ needs in ways city regulations would normally prohibit.

“Removing parking requirements doesn’t move the problem (buyers might still want parking), but it does remove the one-size-fits-all solution,” Manville writes. “Developers can provide parking in the way they think is best, the same way they already provide pools, fitness centers and other amenities.” The result was “more housing with less parking, often in buildings and neighborhoods they had long ignored.”

The experiment worked in downtown. There’s no reason to think it couldn’t work throughout the city, especially if combined with another key ingredient in the downtown trial: eliminating free street parking. “When cities don’t give on-street spaces away for free, developers will provide -- and drivers will pay for -- spaces off-street,” writes Manville. Let the market work.

As I wrote in January, California Sen. Scott Wiener, a San Francisco Democrat, has introduced a bill whose provisions include exempting new residential buildings from parking requirements if they’re within half mile of a major transit station or a quarter mile from a frequent bus stop. The bill would certainly ease California’s housing shortage. But, especially in the era of ride-sharing, there’s no need to tie parking deregulation to transit -- or to wait for the state government to act.

When my husband and I lived in our dingbat apartment with our one car, we only rarely took the bus. We carpooled. Angelenos may love our cars, but we don’t all use them the same way. One-size-fits-all parking rules are increasingly unnecessary and oppressive. There’s no reason to force people to buy smaller homes -- or to squeeze them out of the market altogether -- in order to give everyone, like it or not, convenient parking. Just because it isn’t priced separately doesn’t make parking free.

Virginia Postrel is a Bloomberg View columnist. She was the editor of Reason magazine and a columnist for the Wall Street Journal, the Atlantic, the New York Times and Forbes. Her books include “The Power of Glamour” and “The Future and Its Enemies.”