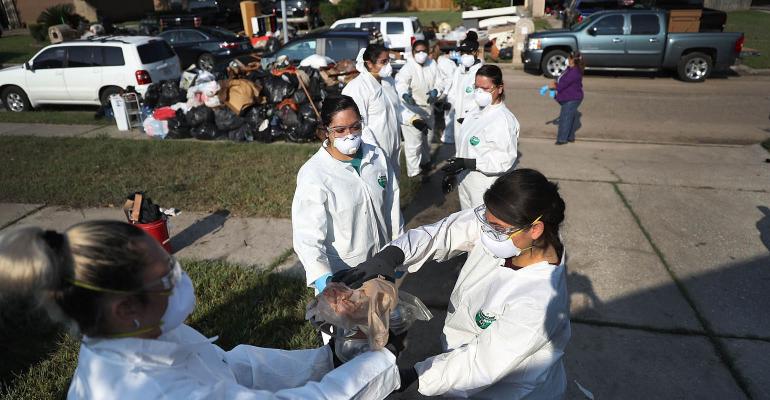 After FEMA disaster officials leave, Ben Carson’s HUD will take on the complicated task of getting victims back into permanent residences.

(Bloomberg)—The long-term recovery for thousands of Texans whose homes were decimated by Hurricane Harvey rests with a Trump administration government outsider who wants his agency’s budget cut by billions of dollars.

After the flood waters around Houston recede and the Federal Emergency Management Agency disaster officials leave, Ben Carson’s Department of Housing and Urban Development will take on the complicated task of getting victims back into permanent residences. HUD’s effort will likely include federal subsidies to offset rental costs and aid for homeowners who are at risk of foreclosure.

The response to Harvey will probably result in HUD being showered with cash, a shot in the arm that would make most agency heads gush. But Carson, a 65-year-old neurosurgeon turned politician, isn’t your typical agency head.

Just last week, fresh off a trip to survey the damage in Texas with President Donald Trump, Carson simultaneously pledged HUD’s commitment to helping the storm’s victims and made comments that could rankle agency employees who will carry out much of the work.

“It’s a bureaucracy and I’m not a big fan of bureaucracies,” Carson said of HUD during an Aug. 30 interview on Fox News’s "Special Report" with Bret Baier. “Bureaucrats are people who think their rules are more important than the goals, so we are actually re-imagining the way that HUD works right now from the bottom up.”

The Trump administration made its first relief request for Harvey on Sept. 1, asking Congress to approve almost $8 billion in aid for FEMA and the Small Business Administration. While none of the initial funds would go to HUD, the White House is expected to make additional requests in the weeks ahead.

The cost of the recovery is daunting. Flooding from Harvey could cause damages of $25 billion to $37 billion to residential properties, with about 70 percent of those homes lacking insurance to protect against water, according to CoreLogic, which provides housing data.

The expected increased funding for HUD shows how events -- particularly disasters -- can scuttle a president’s agenda.

In May, the Trump administration urged Congress to reduce HUD’s annual budget by more than $6 billion, or about 13 percent. When it announced the proposed cuts, the White House called for eliminating a grant program that lawmakers have used to provide additional funding for HUD’s disaster recovery efforts following Hurricane Katrina, super-storm Sandy and the terrorist attacks of September 2001.

“A good question is what is going to be HUD’s response to this: Are they going to call for more funding?” said Inside Mortgage Finance publisher Guy Cecala. “They had across the board cuts planned. Nothing was really sacred.”

In the decade since Katrina slammed into New Orleans, HUD allocated almost $20 billion through recovery grants for communities across Louisiana, Mississippi, Texas, Alabama and Florida, the agency said in August 2015. Money went to rebuild public housing projects, new schools, compensate households for losses, among other things, HUD said at the time.

Carson “is committing the full weight of this department to assist in the long-term recovery of the region,” HUD said in a statement. “Working closely with our federal, state, and local partners, HUD will contribute disaster recovery experts and any available resources to support the all-hands effort to rebuild homes, businesses and critical infrastructure. We are single-minded in our commitment to help those in need.”

HUD, based in Washington, is a sprawling department that employs about 8,000. Established as a cabinet level agency as part of Lyndon Johnson’s Great Society program in 1965, it does everything from helping lower-income Americans buy homes to securitizing mortgages. Carson said on Fox News that Harvey was a “mammoth issue,” but he hasn’t stated whether its causing him to rethink his plans to streamline the agency.

Regardless of what Carson wants, previous disasters indicate Harvey’s wreckage means money is coming. Back in 2006, Congress appropriated $16.7 billion for special disaster recovery grants that HUD oversees following Hurricanes Katrina, Rita, and Wilma. Since 1993, Congress has filled the program’s coffers with more than $50 billion for everything from floods to earthquakes.

After a disaster strikes, Congress can allocate additional money specifically for recovery into the HUD initiative known as the Community Development Block Grant, or CDBG, program. In May, the White House didn’t seek any funding for CDBG grants for next year, and in a press release, said it was seeking its “elimination.”

Even before Harvey hit, lawmakers were poised to reject most of Trump’s proposed HUD budget cuts. The House has drafted a spending bill that provides $38.3 billion for the agency, a reduction of just $487 million. A Senate bill authored by Senator Susan Collins, a Maine Republican, would increase HUD’s budget by $1.4 billion to $40.2 billion.

And last week, HUD was preparing for more money, not less. It has a disaster recovery office overseeing efforts in Texas and Louisiana, with workers set to manage additional funds from Congress. Staff was gathering data on damages to public housing and privately-owned apartments that are backed by HUD programs. Some HUD officials were also helping out with law enforcement and rescue efforts.

Last week, the agency put in place a 90-day moratorium on foreclosures in the region for mortgages insured by the Federal Housing Administration, which is part of HUD. There are about 200,000 FHA-insured homeowners living in counties hit by Harvey, according to the department. Sticking to his conservative principles, Carson said no matter how much cash his agency gets, he won’t let it go to waste.

“We will use whatever monies that we have in an extraordinarily efficient way,” he said in the Fox News interview.