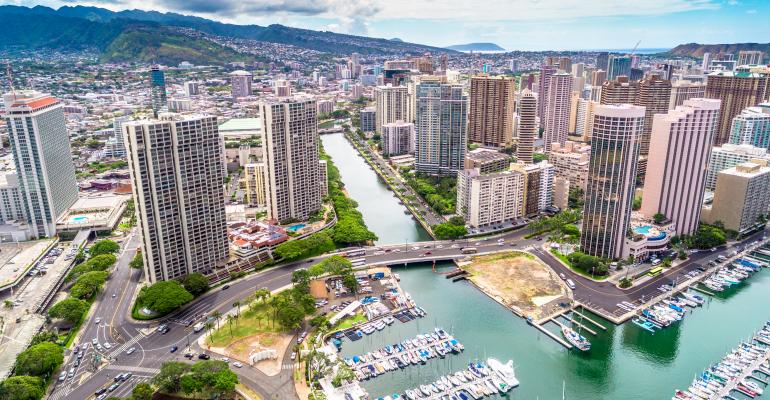 The Hawaii Housing Finance Development Corp. modified the terms of the sale of the state's affordable housing portfolio to Stanford Carr Development and Standard Property Co.

The Hawaii Housing Finance Development Corp. has approved a modification to the sale of the state’s affordable housing portfolio to a partnership of Stanford Carr Development and Standard Property Co. that discounts the purchase price by $40 million but increases the amount of money the buyers will spend to renovate the six properties by $31.2 million.

The partnership, which is called Komohale LP, had agreed on Dec. 14, 2017, to pay $170 million for the six leasehold properties and spend $53.9 million to renovate the units with new cabinets, countertops, plumbing, appliances, flooring and paint, as well as new elevators, roofing and windows.

Under that agreement, the state was to have received nearly $81.3 million in net proceeds.

But after extended negotiations during a due diligence period that was extended five times, the state agency’s board agreed at its meeting on Thursday to the lower purchase price and higher renovation budget, which cuts the state's net proceeds to $45.4 million, which is 44 percent less than the original deal, Chris Woodard, HHFDC’s real estate portfolio manager, told Pacific Business News.

The total amount the partnership has agreed to spend is $215.1 million, which is $8.8 million less than the $223.9 million under the original agreement. Woodard said there are several reasons why the approved amounts are less.

“One is that interest rates have increased significantly since proposals were initially received in response to the RFP,” he said. “The 10-year Treasury-note yield is up about 100 basis points; there’s an increased cost of borrowing to the buyer.

“The second piece of it is that there is a rather dramatic increase in the capital budget and it just inherently makes it a more risky execution for the buyer ... because they have a much larger budget they have to execute on for the renovation,” he said.

Woodard said that an audit the buyers did during the due diligence period uncovered information on the household incomes of the tenants who don't receive rental subsidies from the state. What they found was that those incomes were somewhat lower than originally anticipated.

“There was concern on the buyer’s part about their ability to push rents even within the rent increase limits,” he said. “There may be a lower-than-expected return on the equity investment.”

Despite the discounted price, the state said the Stanford Carr Development-Standard Properties proposal was still higher than any of the four other final bidders. The request for proposals had attracted a total of 19 bids.

“Even with the adjusted sales price, when combined with the increased renovation program budget the buyer’s total investment is still higher than any other offer that we received,” HHFDC Executive Director Craig Hirai said in a statement. “We will be able to provide more information after the transaction closes.”

The partnership’s next step is to increase its deposit by $2.55 million to a total of $4.25 million by Tuesday afternoon. The closing is scheduled for Feb. 15, but Komohale may exercise a total of two 30-day extensions, which means the deal will close no later than April 15, Woodard said.

Rents are to remain affordable throughout the 75-year ground leases, with maximum rents remaining within the federal guidelines for people making 80 percent to 100 percent of the area median income. The HHFDC also awarded $24.5 million in rental assistance program contracts to the partnership to increase and extend existing subsidies for tenants who already participate in the program.

The current manager of the properties, Hawaii Affordable Properties Inc., will be retained, HHFDC said.

CBRE assisted the state with the sale of the properties, while Goodsill Anderson Quinn & Stifel provided outside counsel to the board.