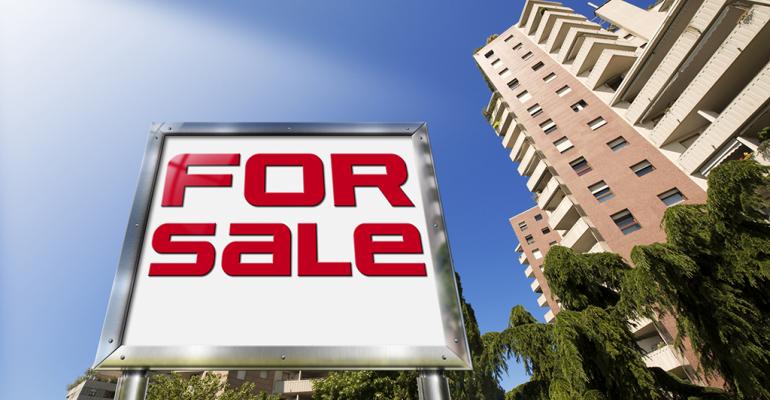 With prices so high for apartment properties, any loan based on today’s appraised values is going to look very large compared to historic prices. But  multifamily CMBS loans are especially troublesome, according to Moody's Investors Service.

“The credit quality of U.S. conduit/fusion commercial mortgage-backed securities (CMBS) continues to deteriorate, with conduit loan leverage in the second quarter pushing past its 2007 peak,” reads a July report from Moody’s.

These loans may look relatively modest compared to the appraised value of the apartments properties now. But if prices were to fall, a number of these loans might be in serious trouble. Lending experts argue that problems may be mitigated by stronger loan underwriting standards overall. Also, property prices may have even more room to rise relative to the income from apartment properties, and don’t have to fall anytime soon, as interest rates creep upwards, according to some apartment experts.

Moody’s: Underwriting way past the peak

“The appraisals on Q2 collateral fully reflect the run-up in commercial property prices to levels that top the pre-crisis peak, while our values use a through-the-cycle approach,” according to Moody’s.

Just to compare, in the third quarter of 2007 the average CMBS loan has an average Moody’s LTV of 117.5 percent on average of the underwritten value of its property over the same period. In response to rising leverage, Moody’s is getting tougher in its CMBS ratings, giving fewer bonds in every CMBS issue the coveted AAA rating because the rating agency expects losses.

The issue of leverage affects the whole business of lending to apartment properties, not just the CMBS business, because it is driven by high prices for apartments.

Lenders are still avoiding some of the worst practices of the real estate boom, however. For example, lenders still require borrowers to show the expenses from a property on a trailing, 12-month basis, says Hughes. Also, borrowers typically can’t get away with forecasting rents that would justify a larger loan, even though the property has now history of earning those high rents.

“I’m not really seeing any of that,” says Hughes. That restraint makes measurements like a loan’s debt service coverage ratios much more meaningful today than it was during the last boom, when giant loans were made based on rosy projections of high rents and low expenses.

Even though apartment properties are selling at historically high prices, by at least one measure prices have room to rise even further. Apartment properties now sell at average cap rates of 5.5 percent. That’s 320 basis points higher than the yield on 10-year Treasury bonds. Just to compare, in 2006 at the height of the boom, cap rates were just 100 basis points higher, according to Institutional Property Advisors.

Cap rates are likely to get a little closer to the yield on 10-year Treasuries. “As investors seek opportunities in secondary and tertiary markets throughout 2015 and compress cap rates there, the spread nationwide to the 10-year will continue to narrow,” according to Institutional Property Advisors.

The benchmark yield on 10-year Treasury bonds is also likely to stay relatively low for a long time. “Even the anticipated increase in the Federal Reserve’s benchmark later this year will likely have minimal short-term effect on long-term rates,” according to Institutional Property Advisors. That’s because the bond markets have expected the Fed to inch rates upwards for a very long time, and there is not much in the latest economic reports to pressure the Fed to act quickly. A strong dollar and low energy prices are helping keep inflation below the Fed’s target of 2 percent. “The Fed has the maneuvering room to adjust rates very slowly,” according to Institutional Property Advisors.