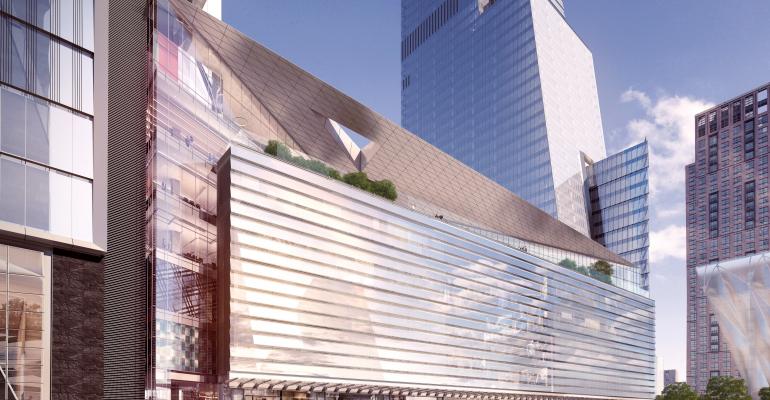 The absence of an existing market for Hudson Yards’ housing component makes the development a “gamble,” according to some in the industry.

(Bloomberg)—Two years ago, Ann Cutbill Lenane visited the salesroom for 15 Hudson Yards, a then-unbuilt condominium in the heart of Related Cos. and Oxford Properties Group’s massive, $25 billion redevelopment on the far west side of Manhattan. “I had heard about Hudson Yards,” says Lenane, a broker with Douglas Elliman. “I envisioned this wasteland where trains used to be.”

But one of her clients wanted to visit, so Lenane dutifully accompanied him. When she walked in, “I was blown away,” she says. There was the glassy, 88 story tower designed by Diller Scofidio + Renfro, but even more than that, she was impressed with Hudson Yards itself.

“There was going to be art and retail and incredible amounts of food,” she says. Lenane’s client ended up buying an apartment in the building, and soon after, so did Lenane, who’ll move into her two-bedroom apartment sometime in June. “I am taking a leap of faith,” she says. “I still have not seen my apartment, but I felt so comfortable, because it was [built by] Related.”

As the development’s retail hub prepares for its grand opening next week, Related is hoping Lenane’s experience will be replicated many times over, not just for 15 Hudson Yards, whose available apartments start at about $4.3 million for a one-bedroom and go up to $32 million for a duplex penthouse, but also for 35 Hudson Yards, an even higher-end, 92-story condominium whose homes start at about $5 million and go to $28.5 million, not including the penthouses.  The average 2018 sales price for a luxury co-op or condo in Manhattan was about $8.5 million, according to a Douglas Elliman Miller Samuel report. These are pricey properties.

“People are really really excited to be here,” says Sherry Tobak, a senior vice president at Related, who’s in charge of sales for both 15 and 35 Hudson Yards. “When the shops open and restaurants open and all the opportunities that exist here—that whole lifestyle is really drawing buyers in.”

Not everyone is sold. “This is not what we call prime [real estate],” says Donna Olshan, president of the luxury brokerage Olshan Realty Inc. “They may consider it prime because they’re building it, but it’s what I would consider an emerging location, which means it’s basically untested.”

The absence of an existing market for Hudson Yards’ housing stock makes the development what Olshan calls “a gamble,” particularly within New York’s slumping housing market. The end of 2018 was the fifth consecutive quarter in which co-op and condo sales declined year over year in the city, according to a report by Douglas Elliman and Miller Samuel.

With New York sales struggling, the billion-dollar question is whether Hudson Yards’ city-within-a-city will prove enough of a draw to beat the rest of the market. “It’s a very challenging market for anybody, and it’s a very price-sensitive market, and it’s a competitive market,” Olshan says.

The bright side, she says, is that Hudson Yards’ combination of millions of square feet of office space and department stores, as well as the cultural and residential amenities Related is promoting, amount to a genuine first for New York. “I don’t think we’ve ever seen something like this,” she says. “I don’t remember New York ever having a dramatic transformation of an area like this, other than maybe Battery Park, years ago.”

As a result, it’s hard to gauge the “value” of the new apartment towers, let alone judge their potential success. “We’ll see how it pencils out for the developer and the people who buy,” Olshan says.

Even Tobak acknowledges that the buildings, which are part of a development that will eventually include a public school, a park, a hotel, and dozens of restaurants, represent a genuine first in New York. “It’s hard to compare this to anything,” she says. “You take a typical $8 million apartment—you might find something similar without a view or amenities,” she continues. Some towers might have a pool or an excellent concierge service, but not a view; others might have all of those things, but be miles away from residents’ offices. “I wish I could compare this to something,” Tobak says, “but I can’t.”

Sticking to Their Guns

For Tobak, the development’s totality is obviously a benefit—Related can argue that, as an anomaly, the price structure for 15 Hudson Yards should be independent from other circumstances. “Look, it’s not as though we’re blind as to the way the market is right now,” she says. “But we haven’t touched pricing.” Related’s strategy, she says, “is to stick to our guns. People want to be here, and they want to put their money where their mouths are.”

Ultimately, an apartment building is an apartment building. “What people are responding to is the quality of the construction and the dream of what the lifestyle is going to be like when it’s complete,” says Vickey Barron, a broker at Compass. The promise of that lifestyle, Barron says, is “the only thing that would make sense for this pricing.”

The pricing Barron is referring to at 15 Hudson Yards starts at roughly $3,000 per square foot and extends to about $6,000 a square foot, well above 2018’s fourth-quarter new luxury condo average for Manhattan of about $3,100.

For her part, Barron says she’s fan of the project, though it took her a little while. “Five years ago, I thought they’d lost their minds,” she says. “I couldn’t wrap my head around the whole vision, but I took a client there Saturday and she was blown away and very inspired. [Related] should get some recognition for what they’ve created there.”

Roll Out of Bed

Related says it’s sold about 60 percent of the apartments at 15 Hudson Yards, though the numbers are impossible to verify until the deals actually close, a process Tobak says is just beginning. “We’re starting closings at 15 Hudson Yards,” she says. “We have about 30 scheduled for March.”

Seventy percent of existing buyers, Tobak says, are drawn from the Tristate area. “Our biggest demo is up and down the West Side,” she says. “We’re pulling from Riverside South, the Meatpacking District, and West Chelsea—those are the people who are most attuned to what we’re doing.”

Two-bedrooms are what she calls “the sweet spot” for their sales efforts. “One of the fortunate things is that in Hudson Yards we have corporations moving in” to the development’s office towers, she says. “You have a lot of buyers who live in Connecticut or Long Island or New Jersey, and they need a place to call home for the week, and it’s so much easier for them to roll out of bed and get to work when they already work these incredibly long hours.”

Even for Lenane, whose office is on the Upper West Side, the proximity of those office towers was an added draw. “Knowing that there are these incredible anchors of retail space and office space—that was always going to feed into my investment,” she says. “There was always going to be a market, because there was a built-in community already.”

As for the price of her apartment, Lenane isn’t concerned. “Listen, people will ask for comps, and certainly there are comps that are all over the place,” she says. “I felt very comfortable with what I was spending and what I am getting.”

To contact the author of this story: James Tarmy in New York at [email protected]