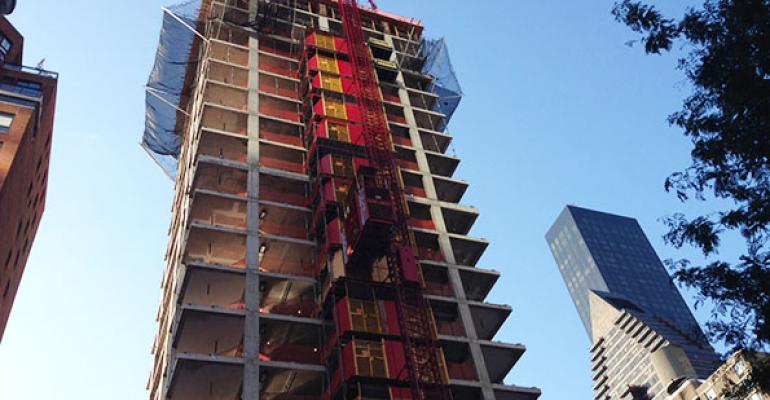 “The bottom line is a very basic story,” says Greg Willett, vice president of research and analysis for MPF Research, a division of RealPage Inc. “Building a lot of product isn’t a bad thing when there is demand there for all of those additions.”

Relatively strong job growth and pent up demand for apartments rescued apartment markets developers built aggressively over the past five years. If that job growth is interrupted, as it was in Washington, D.C., then apartment markets could choke on the new supply. That’s what seems to be happening right now in Houston, as the energy industry falters and local vacancy rates rise.

Fortunately, the U.S. overall seems to be getting stronger and stronger—at least for now.

Strong demand absorbed most of the supply of new apartments over the last five years in the metropolitan areas where developers built the largest numbers of new apartments, relative to the size of the local market. In nine out of these 10 metro areas, rent growth remained positive, though rent increases typically slowed in the peak years as new supply came online, according to MPF.

According to Reis Inc., the percentage of vacant apartments did inch higher in many of the towns that had the most new construction. However, vacancy rates remain low overall. “Even with this large influx of new inventory over the past three years, the 2014 year-end vacancy rates of all but three of these cities are below their historical averages,” says Brad Doremus, senior analyst for research and economics at data firm Reis, Inc. Those three cities include Washington, D.C., and Raleigh-Durham, N.C., each of which experienced an increase of at least 200 basis points. New York had a vacancy rate increase of over 120 basis points over that period,”

“The deliveries have leased up at very healthy rates, reflecting that these tend to be spots realizing strong job growth,” says Willett. The apartment markets also benefited as young people finally began forming their own households—and renting their own apartments—after years of living with parents, staying at university or doubling up with roommates during the Recession and the long slow recovery.

However, the nine markets with the most new construction can’t absorb so many new apartments forever. Rent growth is beginning to slow. “In almost all of these markets, the 2014 rent growth number would be far below the four-year average,” says Willett. To avoid rising vacancies over the next five years, the construction of new apartments will have to fall back to a more normal level. “You can’t expect the market to continue to absorb so much,” says Willett.

Depending on the Job Market

Of course, all bets are off if job growth is interrupted in a market where developers are rapidly building new units.

“It’s the only place where average annual rent growth over the five-year period is meaningfully below the historical norm,” says Willett. Washington, D.C., averaged 2.5 percent rent growth over those five years. The nation’s capital is also the only place where class-A apartment properties have trailed the rent-growth pace realized for apartments overall—an important clue that too many new apartments have hit the market.

Houston seems to be following in Washington, D.C.’s footsteps. It had a very strong, local economy that weakened just as a huge amount of new apartments opened their leasing offices—just like Washington, D.C.

The numbers of jobs in Houston grew by more than 100,000 a year, or 4 percent, in recent years. Houston will create far fewer new jobs in 2015—just 60,000, according to the latest forecast from the Greater Houston Partnership. Also in 2015, developers in Houston will finish roughly 18,500 new rental apartments, according to data firm Reis, Inc.

The percentage of vacant apartments is projected to rise to 6.8 percent by the end of 2015, up from 5.7 percent the year before. Over the next four to five years, the vacancy rate is forecast to be in the 8 percent to 8.5 percent range, according to Reis. 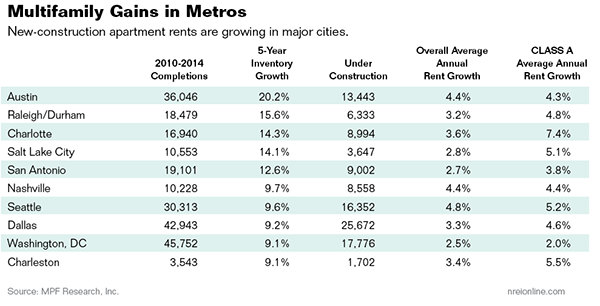