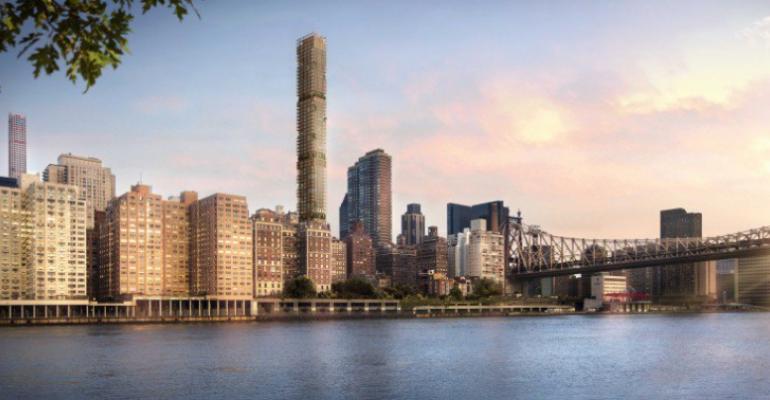 (Bloomberg)—A development site slated for an almost 1,000-foot condo tower on Manhattan’s far east side found a new owner through a bankruptcy auction Tuesday, removing a hurdle for construction after about a year of delays.

Gamma Real Estate, the lender to the project, won the auction with a credit bid of $86 million and is poised to take control of the site, pending approval from the bankruptcy court, said David Schechtman, a broker with Meridian Investment Sales, which handled the auction with another brokerage.

Developer Joseph Beninati’s Bauhouse Group placed the site into bankruptcy earlier this year to stave off foreclosure. Gamma was one of two bidders for the property, which consists of several parcels and air rights on East 58th Street, just off Sutton Place and near the East River waterfront. Schechtman said he didn’t know whether Gamma would continue with Bauhouse Group’s plans, especially in light of a slowdown in Manhattan’s luxury-condo market.

Gamma’s principals “certainly have the financial wherewithal to be in a position to not have to make a decision about the future of the site today,”  Schechtman said in an interview. “They can certainly take a long term view of things. They can land bank.”

The site allows for a development of 267,000 square feet (24,800 square meters), including air rights still under contract, according to Schechtman. Gamma would need to pay an additional $12 million to complete the purchase of those development rights, he said.

Bauhouse Group had planned a 950-foot (290-meter), Norman Foster-designed condo tower at the site, bringing a bit of Midtown’s supertall building frenzy to the quieter fringes of the East Side. The project’s scale drew opposition from neighbors, who are seeking to have the city rezone the area to cap the height of residential buildings at 260 feet, or 25 stories.

A rezoning proposal by East River 50s Alliance is almost ready to be given a case number and be presented to the public for review, said Alan Kersh, the group’s president. Manhattan Borough President Gale Brewer is among the applicants for the proposal, which was initially submitted to the city planning department in January.

“It’s been a race against the clock,” Kersh, who is also president of the co-op across the street from the development site, said before the auction took place. His group “would welcome the opportunity to dialogue with the new developer, but really the focus is on the process that would move this through.”