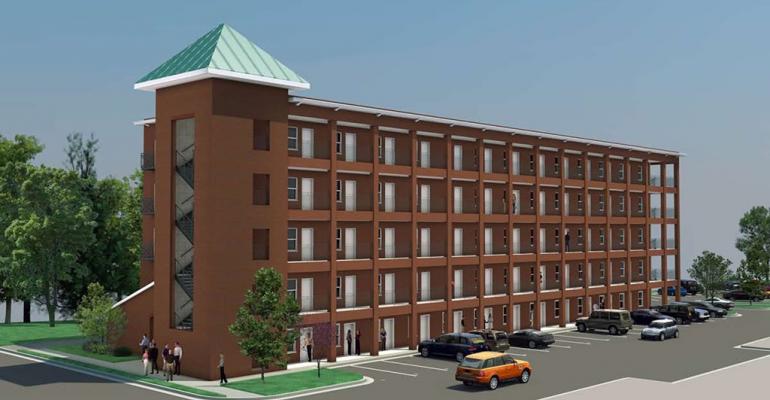 It only took 47 days to construct 65 apartments at Hilltop House, a new modular multifamily development in Winston-Salem, N.C. That includes 36 days for Champion Home Builders Inc., to create 52 modules in one of its factories and just 11 days to set the modules in place on a tiny site in Winston-Salem’s historic downtown. Six months later, in early 2014, the community, which includes both conventional and modular construction, was open for occupancy.

With so much new apartment construction planned for downtown areas across the country, modular construction may give developments like Hilltop House, developed by HTBT Properties, an advantage in the race to open their new apartments ahead of the competition. More than 1,000 apartments are planned for downtown Winston-Salem in the next few years, according to local news reports.

“The multifamily housing market is poised for strong growth in the upcoming year,” says Tom Hardiman, executive director of the Modular Building Institute (MBI). “Modular construction is ideal for this market as it shortens the overall construction schedule allowing for earlier occupancy and quicker return on investment.”

Modular construction, in which buildings are created in a factory, transported on the back of a truck to the site and assembled like giant Lego blocks, has become an increasingly common construction method for apartment developers. Proponents say it saves developers money and time. The quality of construction can also benefit from the quality controls that come with construction in the controlled environment of a factory.

Modular construction can reduce the high cost of labor. The most desirable development sites are now in the middle of cities, where young people want to live, but where labor is often relatively expensive. Building with modules allows developers to construct large pieces of projects in factories far from these high-cost areas, in places like Idaho or Pennsylvania.

Modular construction cut 20 percent from the cost to construct 28 apartments at The Stack, a new development in the Inwood neighborhood on the northern tip of Manhattan, according to a report from MBI. As construction heats up across the country, many apartment developers face a shortage of labor. The shortage is worse because many construction companies closed down during the recession, forcing construction workers to find other work. Many immigrant laborers who were in the framing and drywall trades left the U.S. to return to their home countries when their jobs disappeared.

Modular construction can also save developers a great deal of time. Equity Residential trimmed four months from the time it took to build 444 new apartments its Domain Apartments in San Jose, Calif., thanks to modular construction. The quality of construction is also very strong for the modules, which were inspected in their factory in Boise, Idaho, and kept out of the rain and weather. The “punch list” of items to fix in the final phase of construction was very short. “The initial punch was better than I’ve ever seen,” says Peter Solar, who worked on the development for Equity Residential and is now managing director of investments for Northern California for Alliance Residential.

Modular construction does have some drawbacks. It can be important to have a staging ground near the site to place modules—or a relatively traffic-free route to bring modules into the site. Otherwise, a $5,000-a-day crane operator may have to wait around the construction site while the next 10-ton module fights its way through morning traffic on the back of a semi-truck. Bad weather and road conditions between the factory and the construction site can also create delays, says Solar.

Modular design can also present a novel challenge for architects. Although the modules can be created in practically any shape that will fit on the back of a tractor-trailer, some designers may require some prodding to resist the temptation to create relatively plain, boxy buildings out of the stacked modules, without much movement in the facades, according to Solar.

However, says Solar, most developers who have tried modular would be open to using it in future projects. “We would definitely consider it,” says Solar.