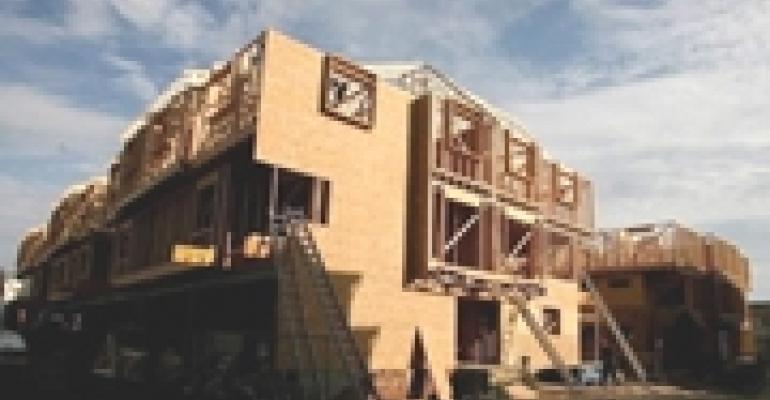 No Danger of Overbuilding in Multifamily Sector Until 2013

With the increasing popularity of multifamily properties as an investment class, some industry pros are beginning to question whether the sector might end up overbuilt.

Yet going forward, construction activity in the sector will undoubtedly expand.

In October, 47 percent of respondents to a quarterly survey administered by the National Multi-Housing Council (NMHC), a Washington, D.C.-based trade group, reported a substantial pick-up in land acquisitions, financing deals and permit applications for multifamily properties in their local markets. In 2012, Reis expects to see between 72,000 and 85,000 newly completed units, while Marcus & Millichap anticipates 85,000 new unit deliveries.

Given the abundance of demand for new apartments, that still won’t put the sector in danger of overbuilding in 2012. In 2011, the national vacancy rate for multifamily properties declined 120 basis points from the year prior, to 5.4 percent, Marcus & Millichap reports. Effective monthly rents rose 4 percent, to $995 per unit. This year, multifamily vacancy should fall another 40 basis points, to 5 percent, in Marcus & Millichap’s estimates. Effective rents will likely rise 4.8 percent.

About 43 percent of respondents to the NMHC survey said that multifamily development is near the right level given existing demand, while 54 percent said that demand continues to significantly outstrip supply, even with the expected ramp-up in new construction.

“It is improbable that we will face overdevelopment in 2012 because strong demand should remain in place through the coming year,” says John Chang, vice president of research services with Marcus & Millichap. “For example, the prime renter cohort, aged between 20 and 34, will continue to grow significantly and enjoy an outsized share of job gains. Although employment is not expected to grow at an exceptional pace, it should outpace 2011 performance in the coming year, generating significant housing demand.”

“Almost all markets will experience vacancy declines in the coming year as demand outstrips supply additions,” he adds.

Jubeen Vaghefi, managing director and national leader of the multifamily practice with Jones Lang LaSalle, a Chicago-based real estate services firm, echoes Chang’s sentiments. He anticipates that in core markets, multifamily rents will grow between 5 and 8 percent in 2012. In secondary markets, rents might rise another 3 to 5 percent.

“If you look back over the last five years, there hasn’t been much in the way of new supply, and most people are leaning toward renting versus buying,” Vaghefi says. “Occupancies in most markets are up, so in 2012, we see a continuation of last year.”

Even with substantial demand for new apartments, net absorption in the multifamily sector decreased significantly in 2011, to 153,000 units from 225,000 units in 2010, according to Marcus & Millichap. With less than 40,000 new units added to the market last year, lower absorption levels haven’t threatened to become a problem so far.

But as the number of new construction units spikes to between 105,000 and 250,000 in 2013, over-building may become a legitimate concern, according to Victor Calanog, vice president of research and economics with Reis. In the past 20 years, new multifamily construction peaked at 188,870 units in 1999.

As of October, permits for apartment buildings containing at least five units increased 45 percent year-over-year, to 232,000 units, reports Marcus & Millichap. Given a 12-to-18-month construction window, that means the industry might begin to see an imbalance between supply and demand starting in 2013.

“We’ve been bringing up the possibility [of overbuilding] for more than a year now,” says Calanog. “In terms of timing, we don’t think much of the supply will hit till late 2012—that doesn’t even account for the usual delays we experience in commercial real estate construction. If there is indeed a deluge of new buildings coming to the market, the sector will probably feel the brunt of any pain it might cause in 2013.”