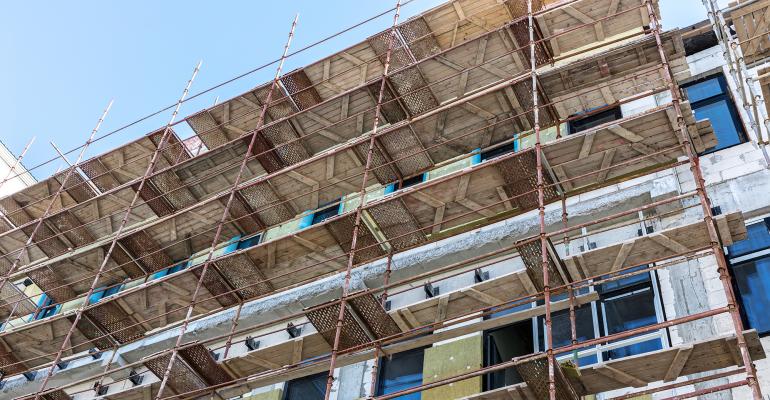 A report from tenant advocacy group the Housing Rights Initiative found more than 10,000 false renovation applications over the course of two and a half years.

(Bloomberg)—New York’s city council is moving to enact a law to deter landlords from falsifying construction permit applications for building renovations in an effort to drive tenants out of rent-controlled apartments.

The tactic has drawn increased scrutiny after the city fined Kushner Cos., the family business of President Donald Trump’s son-in-law, Jared Kushner, for allegedly engaging in the practice.

In a report released Monday, the Housing Rights Initiative, a tenant advocacy group, said it found more than 10,000 false applications by hundreds of landlords over the course of 2.5 years. The applications routinely state the buildings contain no rent-regulated tenants when in fact such tenants do reside there, the group said. Doing so would allow landlords to avoid scrutiny when conducting disruptive renovations that advocates say are meant to drive low-rent tenants out by making conditions unbearable.

“The Department of Buildings has said they would hold landlords accountable for falsifying their applications and now we are going to hold the department accountable for enforcing the law and honoring its promise,” said Housing Rights Initiative Executive Director Aaron Carr.

The city council’s legislation would require the buildings and finance departments to coordinate their information to identify false applicants, who would then be subject to an audit of their entire property portfolio to determine whether any false statements were made elsewhere. The buildings department would also audit 25 percent of a compliance watchlist. False applicants would be referred to law enforcement authorities.

“We refuse to stand by idly while real estate companies like the Kushner Cos. play Russian roulette with the safety of tenants and the affordability of rent,” said Council Member Ritchie Torres, who is pushing for the measure’s adoption.

The city’s building department hasn’t had an opportunity to review the report’s findings to determine its accuracy, said Joseph Soldevere, a spokesman for the department. He said the group’s findings would cover at most 3 percent of the applications over that time and that some of the mistakes may have been made inadvertently.

"DOB thoroughly reviews and audits permit applications to protect residents, whether or not the landlord checks the rent-regulation box on our forms," he said.

The city Buildings Department fined Kushner Cos. $210,000 last month after finding 42 erroneous applications for construction work on more than a dozen buildings during the time when the president’s son-in-law controlled the business. In a statement last month, the Kushner Cos. said “third party consultants” prepared the construction permit applications and it had either corrected or intended to correct any errors.

“In no case did the company act in disregard of the safety of our tenants," said spokeswoman Christine Taylor, according to the Associated Press. “We look forward to presenting the facts before an administrative law judge and until then no amount is due.”

John Banks, president of the Real Estate Board of New York, which represents landlords, said his organization supports efforts to ensure accurate paperwork.

“It is important to determine which, if any, landlords are purposefully hiding rent-regulated units with the goal of harassing tenants,” he said. “ If such behavior is occurring, such owners should be held responsible.”