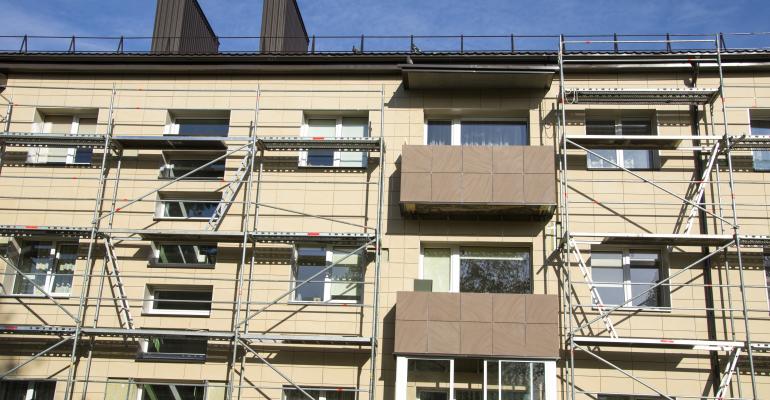 A softening in the multifamily segment is something to keep an eye on.

(Bloomberg)—Faster apartment building was instrumental in pulling the U.S. housing market out of its slump a decade ago. Now, that engine is starting to throttle back.

A softening in the multifamily segment is something to keep an eye on even as overall homebuilding -- which includes single-family dwellings that make up the largest share of the market -- is expected to keep moving forward.

The supply of apartments and condominiums has surged in recent years as builders responded to rising demand, fueled in part by young Americans who preferred to rent rather than purchase a home in the aftermath of the recession. A surge in prices for single-family properties, as the real-estate market recovered from its 2006 plunge, also made apartments more attractive for both builders and people unable to buy.

The following charts show how multifamily construction is maturing and what that implies for the economy.

Many of the recent projects are finished and ready to rent. A Commerce Department report on Friday showed completions of multifamily units in October reached the fastest annualized rate in almost three decades.

What’s more, the pipeline of apartments under construction is leveling off from a 42-year high reached at the start of 2017. And the number of multifamily units authorized but not yet started also is cooling as builders attempt to calibrate the supply.

While new multifamily-home construction and permit applications are both still rising, there’s less incentive to keep building with as much intensity. By 2016, multifamily starts had recovered 96 percent of the ground lost during the downturn, while the single-family market was just at 45 percent, according to a report this month from Dodge Data & Analytics, which provides construction-industry data.

Among some other warning signs, rental vacancies have climbed to a two-year high as demand is getting crimped by the 33 percent runup in rents during this economic expansion.

The effects of any slowdown in multifamily housing will have repercussions in the broader economy and extend to other data. First, an adequate supply of apartments -- both ready and in the pipeline -- could eventually put downward pressure on rental prices, slowing growth in shelter costs that have been propping up inflation so far. Shelter accounts for about one-third of the consumer-price index.

A more tempered pace of apartment development would free up construction workers who builders say are in short supply. That would be welcome news for single-family homebuilding, which requires more labor relative to multifamily construction. The number of one-family houses under construction in October was the highest since July 2008, boding well for industry payrolls.