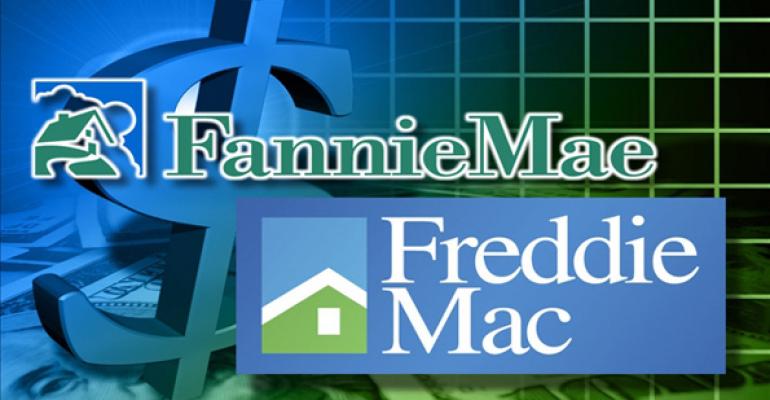 The Road Ahead for Fannie and Freddie

The likely fate of Fannie Mae, Freddie Mac and much of the multifamily lending business became much clearer on Tuesday, when President Obama endorsed a reform plan already underway in the U.S. Senate.

“Right now there’s a bipartisan group of senators working to end Fannie and Freddie as we know them. And I support these kinds of reform efforts,” said President Obama, speaking in Phoenix, Ariz., August 6. His speech called for private capital to take a bigger role in the mortgage market.

Currently, about a third of all the permanent loans made to multifamily real estate properties are made through Fannie Mae and Freddie Mac programs. Over the last few years, real estate experts have been deeply uncertain about the eventual fate of Fannie and Freddie, though few thought change would happen anytime soon. President Obama changed all that by supporting reform efforts like the Senate bill and creating unexpected momentum for action.

The Obama administration’s plans for Fannie and Freddie follow the ideas already laid out in the legislative proposal introduced by Senator Bob Corker (R-Tenn.) and Senator Mark Warner (D-Va.) earlier this year. “I think they are following Congress rather than leading,” says David Cardwell, vice president of capital markets for the National Multi Housing Council.

Little has been put into writing regarding multifamily, however under the leading proposals the government would continue to take on significant risk from home loans and commercial mortgages. “The centerpiece of this new system is an explicit and limited government guarantee on certain kinds of single-family and multifamily mortgages,” according a description by Enterprise Community Partners, Inc. This guarantee would probably be carried out by a government insurance fund that would guarantee mortgage bonds backed by home loans and commercial mortgages made through certain government-sponsored loan programs, according to experts such as Cardwell.

Private lenders could make permanent loans to apartment properties that meet the certain standards set by this government insurance fund. If these apartment loans suffered any losses because of foreclosure, private capital would take the first loss, the government would guarantee the rest.

A bond issuer could then issue AAA-rated bonds backed the portion of mortgage debt that receives the government guarantee. In exchange for this insurance on the mortgages, the lender would pay a fee to the government insurance fund. The resulting system would be similar to Fannie Mae’s Delegated Underwriting & Servicing program and Freddie Mac’s Capital Market Execution program, according to Cardwell. Under that system, loan originators hold the first part of the risk of loans on their own books.

Apartment experts had worried that reform might stop the government from issuing any more guarantees for loans to apartment properties. On May 3, the Federal Housing Finance Agency released reports that game out what would happen if their multifamily lending business were privatized and stripped of its government guarantee. The verdict was straightforward: “Without a government guarantee, a fully private company may not provide the same level and scope of services,” according FHFA’s reading of the reports.

The plan being discussed would save the guarantee—of course, the legislative game is far from over. “There a lot of work needed to fine tune the proposal,” says Clifton E. Rodgers, Jr., senior vice presidentThe Real Estate Roundtable.Industry groups are in close conversations with legislators—MNHC has meetings scheduled with several Senators of the Banking Committee.

Apartment experts are still concerned about the many details of the plan, such as how the new system might function in a new financial crisis. “GSE reform must not focus solely on single family housing but must also include a mechanism for supporting the conventional multifamily loan market during periods when the private financing market is incapacitated or in distress,” according to a statement by the Real Estate Roundtable after the President’s speech.

A potential government insurance fund could fill that need. “An investor would be inclined to purchase a security knowing that there was an explicit governor guarantee on at least part of the capital stack—that could help smooth out demand during disruptions to the financial system, though private capital should carry to primary,” says Rodgers.

Affordable housing advocates are also interested in the reform effort. The Corker Warner bill would also include some funding for a National Housing Trust Fund. Some of the difference between the fees paid into the government insurance fund and the amount paid out to cover loan losses could be used to support the construction of government subsidized affordable housing.

The U.S. House of Representatives also has its own proposal to completely wipe put Fannie Mae and Freddie Mac and leave to private market to take on mortgage finance—without any government guarantee of mortgage loans. Legislators have called that plan “dead on arrival,” because is seems unlike to even receive any Democratic support.