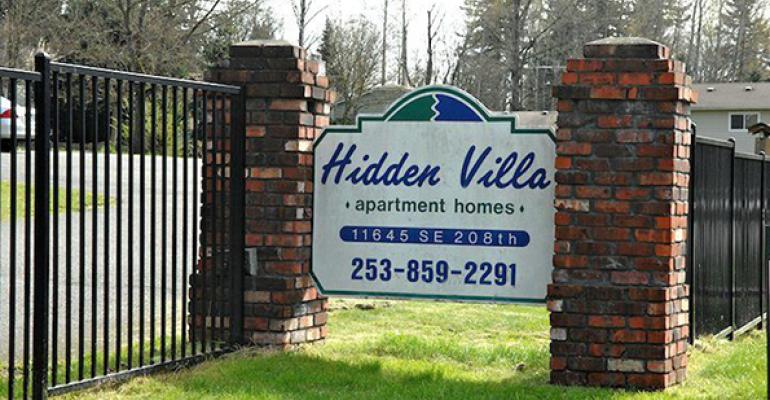 There Are 5.6 Million Cheap Apartments in America. Not for Long

Built in 1968, it was acquired recently by an out-of-town developer who plans to tear up the old carpeting and roll in some stainless steel appliances. The idea is to attract the wealthier workers flocking to knowledge industry jobs in the Portland, Ore., metropolitan area and charge higher rents.

That's the number of inexpensive market-rate units in the U.S., according to a new tally from CoStar Group, a real estate data and analytics company. And that's about the number of units of publicly subsidized affordable housing, too.

Activists and policymakers have invested time and money keeping subsidized units available at below-market rates, while ‘naturally occurring’ affordable housing, as the wonks sometimes call properties like Hidden Villa, get much less attention. Yet there are fewer obstacles to developers seeking to take unsubsidized apartments upmarket—and out of reach for poor renters.

“It has really been a blind spot in affordable housing policy at the local, state, and federal levels,” said Stockton Williams, executive director of the Terwilliger Center for Housing at the Urban Land Institute. "The economics don't work for the private sector to build this kind of housing, so we'll have less of it over time unless what's already built is acquired and preserved."

One reason for the neglect is that naturally occurring units are harder to track. Ownership is concentrated among regional and local players, who don’t have contracts with government agencies that make subsidized units easy to aggregate at the national and local levels.

While unsubsidized by the government, these units remain affordable to working-class tenants because of when and where and how they were built. Typically, that means older units with low-end finishes. The locations vary, though cheap apartment buildings in central, transit-oriented locations tend to attract investors who specialize in fixing up older units and raising rents.

"When we started out, our model was, let’s buy from the slumlords and create habitable housing," said Max Sharkansky, managing partner at Trion Properties, a decade-old Los Angeles-based property manager that bought Hidden Villa. The company targets deals where it can raise rents by 25 percent, often more.

"If someone can’t afford it, they can move into something older or more vanilla and pay the lower rent," Sharkansky said. In the submarkets that his company targets, those kinds of apartments often no longer exist. "Usually the only option is to move out of the neighborhood."

The CoStar data (PDF) represent the first, best effort to count the stock of naturally occurring affordable housing, Williams said. To compile its research, CoStar used a proprietary ranking system that awards multifamily properties one to five stars, based on quality of design, structural systems, and other factors. Two-star properties such as Hidden Villa feature functional aesthetics, below-average finishes, and noticeable wear and tear. Five-star properties are graced by open plans, energy-efficient systems, and expensive materials.

The result of the rankings is a system based on the quality of the real estate asset, not on rent prices or affordability—an approach that gives the world another way of measuring the rampant costs of living in San Francisco.

In the Atlanta metropolitan area, for example, the average asking rent for one- and two-star apartments was just under $800 a month in the second quarter. For similar units in San Francisco, the price was just under $2,600.

That means, based on standard affordability metrics, that a household needs to earn more than $100,000 a year to afford the rent on the bottom third of the city's apartments.

What most of these cheap apartments have in common is that they’re old. Developers generally aim new projects at the top of the market; as fresh units hit the market, older apartments get less expensive. About 3 million of the units identified by CoStar as naturally occurring were built in the 1960s and 1970s. That makes sense, since the U.S. built 11 million multifamily units in those two decades. We’ve built only 6 million in the last 20 years.

But the old age of cheap market-rate apartments is a double-edged sword for poor renters. Owners of aging apartments that can’t command high rents don’t have a lot of incentive to make improvements, creating a housing stock that becomes less habitable over time. Cheap apartment units in improving neighborhoods, on the other hand, can be attractive targets for value-add investors—who make repairs and increase rents.

Whether you think that’s a bad thing or not, what seems clear is that the slower pace of construction in the last few decades has baked in a future shortage of affordable units. That may augur a time when the largest source of cheap, unsubsidized housing comes from single-family rental homes.

In the meantime, mission-driven real estate investors have made some efforts to preserve market-rate housing, making modest improvements and keeping rent hikes to a minimum. Those efforts are still new, and they are dwarfed by funding to protect subsidized units. Even if those investors can attract more capital, the best they can do with it is stem the tide.

“We have to figure out how to build more housing, whether it’s a single-family house or an apartment building,” said Hans Nordby, managing director at CoStar Portfolio Strategy. “If we don't, we're going to risk boiling down the social stew to rich people and the people who serve them lunch."