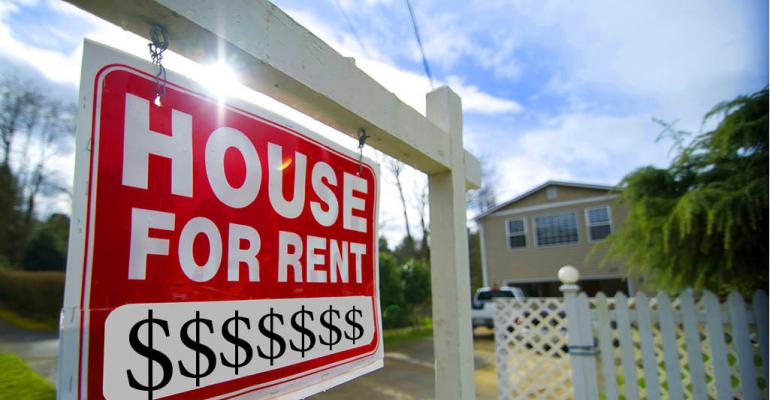 U.S. Rents Are Getting More Affordable—as the Renters Get Richer

One reason for the shift is that wealthier families are increasingly likely to rent, allowing landlords to raise prices without raising the risk that their tenants won’t pay.

(Bloomberg)—Following the Great Recession, the cost of rental housing took a growing bite out of U.S. household budgets, as increasing demand for rental units pushed up prices. Now the share of households considered burdened by high rents is falling, according to a report from New York University’s Furman Center for Real Estate & Urban Policy.

That’s good news. But the dynamics driving improved affordability are a mixed bag.

One reason for the shift is that wealthier families are increasingly likely to rent, allowing landlords to raise prices without raising the risk that their tenants won’t pay. As the chart shows, the number of households that spend 30 percent of their income on rent (considered cost-burdened) and the share that spend half their income on rent (considered severely cost-burdened) are still historically high.

Twenty-one percent of households earning at least 120 percent of the area median income rented in 2015, up from 15 percent in 2006; families with children and households where at least one member has a bachelor’s degree also became more likely to rent over the course of the decade.

“More people are choosing to rent, and disproportionately so among the higher-education, higher-income groups,” said Sewin Chan, a professor of public policy at NYU and co-author of the report. “It seems extremely likely that they’re driving up rents.”

Not all cities benefited from better affordability; of 53 metros with at least 1 million people, one in three recorded an increase in the number of cost-burdened households. Fifty-nine percent of Miami renters spent at least 30 percent of their income on rent, the highest in the U.S.

One positive from the report is that rental affordability improved across income levels, with the rent-burden rate falling fastest for households earning between 50 percent and 80 percent of their area median income. Those earning less than half their median area income saw more modest improvement, though, and there’s currently a shortage of more than 7 million housing units affordable to the poorest U.S. households, according to the National Low Income Housing Coalition.

Households that moved, meanwhile, probably saw their rent go up.  Across the 53 metros included in the Furman Center report, households that had moved in the 12 months preceding the Census Bureau’s 2015 American Community Survey reported paying rents that were 5 percent higher than the renter population at large. But renters in the big metros shown in the chart above faced much steeper hikes.