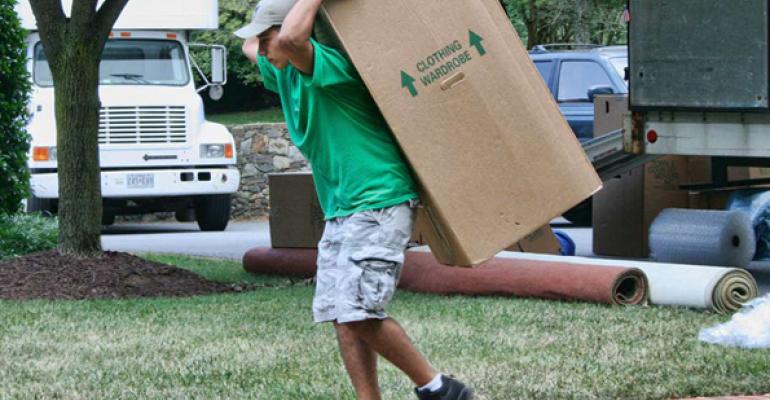 When It Comes to Moving, Millennials Are Stuck in the Mud

(Bloomberg)—Fairly or not, the millennial generation has a reputation as footloose and fancy-free. Or, to put it less kindly, slow to launch—slower to get married, buy a house, and have kids than the young people of previous generations.

So you’d think they’d be moving all over the country, discovering whether they’d rather live in a micro-apartment in the Midwest, say, or telecommute from an old farmhouse a couple of hours outside a big city.

In fact, they’re moving around significantly less than previous generations did at the same ages, according to Census data tabulated by Richard Fry, a senior researcher at Pew Research Center. Last year, 20 percent of Americans ages 25 to 35 had moved within the past year. That compares with 26 percent when the same age group was composed of Generation X in 2000, and 27 percent when it was made up of “late boomers” in 1990.

But it’s not just young people. The share of the population that has moved at least once within the past year, a key measure of mobility, has followed the same trend among other cohorts of the working population, as the chart below shows.

It may be that the job market is weaker today, at least in parts of the country, than the national unemployment numbers say, Fry said. Or it may be that millennials are frozen in place by a housing market that’s still short of supply to meet the demand. Under that theory, older homeowners aren’t trading up for more expensive homes, choosing instead to remain in cheaper models, thereby limiting the number of starter homes on the market.

Mobility is important to the economy. People who move spend money on houses, furniture, real estate agents, and moving companies. People moving to pursue a job are often seen as a sign of a healthy economy.

Fry didn’t have data handy for every age cohort, but he did pull figures for the 25-35 group. In 2000, when that group was made up of Gen Xers, 50 percent of respondents said they moved for housing-related reasons, like wanting to own or to live in a nicer neighborhood. Meanwhile, 21 percent of that age group moved for job-related reasons in 2000.

Fast-forward to 2016, and the gap has narrowed substantially.