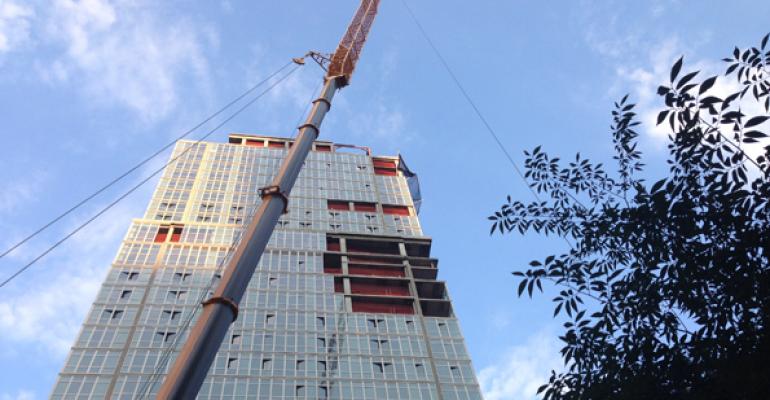 It’s not too late to build. New apartment communities that open their doors in 2017 will probably still enjoy a strong U.S. apartment market—despite a slightly higher vacancy rate and slower rent growth.

Apartment developers have been very busy in 2015. They are likely to open even more new apartments in 2016. The number of apartments available will finally grow decisively faster than the number of people looking for apartments, pushing vacancy rates higher and rent growth down, experts says. But vacancy rates are now so low they are likely to remain historically low in 2017, even after creeping upward. What’s more, rents will likely keep growing, even if not as quickly as they did this year.

“We are coming off [a] historically very strong performance,” says Steinberg.

Developers will open more than 228,000 new apartments in 2016 and another 178,000 in 2017 in the top 54 apartment markets, according to research by CoStar Portfolio Strategy. In comparison, during construction booms of the past, like the one in 2001, developers barely finished more than 150,000 apartments.

Demand for new units should remain strong, but not quite strong enough to keep the vacancy rate at its historic low.

“You could work a good horse to death,” says Hans Nordby, managing director with CoStar. The average vacancy rate will rise to the mid-4-percent range by the end of 2017, CoStar researchers project.

Researchers at Reis are slightly more pessimistic. “Almost across the board, new supply is going to be outpacing demand,” says Steinberg. “The vacancy rate might crest at above 5.0 percent.”

Demographics will cause some of that shortfall. As large numbers of baby boomers continue to retire, the number of working-age people will grow more slowly. Also, the oldest Millennials will be in their mid-30s in a few years. So far, many have delayed coupling up and having children, though as they age, they are more likely to start families. That could steer a bigger portion of the Millennial population toward single-family rental houses and for-sale homes—and away from rental apartments.

“Demand appears likely to come in at a somewhat lesser level in 2017 and 2018,” says Greg Willett, vice president of research and analytics for MPF Research, which tracks the apartment market.

Even with more supply and weaker demand, the apartment market in two years should still be strong enough to support rents that, on average, will grow faster than the rate of inflation, experts say. Reis predicts rents will grow by more than 3 percent in 2017—an impressive increase, though less than the current growth rate of over 4 percent.

The opportunity in the suburbs

“Developers have been heavily focused on construction in downtown,” says Nordby. “Prime suburbs represent an opportunity because they are generally a couple stops away from downtown on mass transit—so have walkability, etc.—and will not see as much construction.”

Between 2012 and 2017, developers are likely to have finished roughly 284,000 new apartments in central or secondary business districts of the top 54 cities, according to CoStar. That’s an increase of nearly 25 percent compared to existing inventory. In prime suburban areas, developers will have finished 190,000 new units from 2012 to 2017, a smaller increase to the existing inventory at approximately 15 percent.

Over the same period, developers will have finished nearly half-a-million new apartments in suburbs and rural areas. That sounds like a very large number, but it is spread over a much larger area and will add less than 10 percent to the inventory, according to CoStar. Many suburbs will also benefit from solid job growth.

“If we’re going to add rental housing where the key job growth is, that’s really the suburbs in most metros,” says MPF’s Willett.