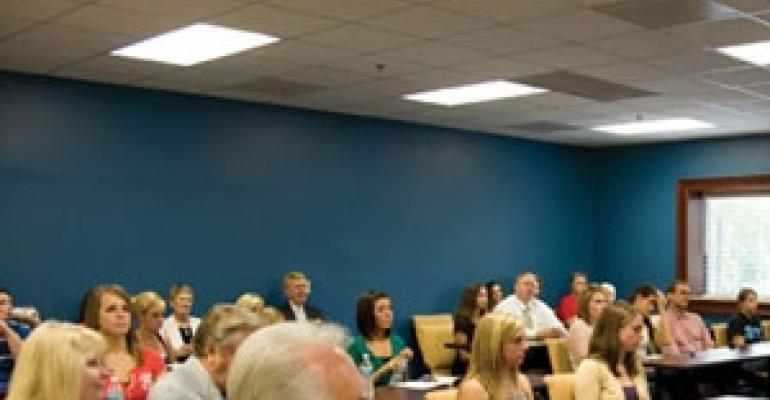 It’s not just kids who are going back to school this fall. With the unemployment rate spiking, adults have increasingly returned to the classroom to make the most of downtime and to acquire marketable skills, increasing their chances of getting back into the workforce.

That trend is translating into a boon for retail property owners in the Southeast, where schools are becoming unconventional but valuable tenants at shopping centers and mixed-use sites, filling space that might otherwise stay vacant.

The schools are among a variety of nontraditional tenants moving into shopping centers. Real estate observers in Georgia and Florida say many of the expanding schools cater to adults looking to brush up skills or pursue a new career. The institutions trade in vocational and professional disciplines such as cosmetology, massage therapy, nursing, business and real estate.

Whatever the subject, they make themselves welcome at shopping centers by attracting more foot traffic at a time when it’s sorely needed. Students on break shop or grab a bite at neighboring restaurants. And schools often pay rents on a par with retailers. In some cases, they even add a service to a shopping center’s portfolio—such as the barber school where patrons can find a cut-rate clipping.

“It’s a great use of space,” says Kris Cooper, managing director at Jones Lang LaSalle in Atlanta. “It not only brings more people to the property, but the schools are pretty easy as far as buildout. They’re not that hard on an owner.” However, some facilities do have special needs, such as medical schools that require laboratories.

Schools may also pose other challenges for landlords to address. Parking ranks as a key concern. A school may bring large numbers of students to a center for hours on end, potentially overtaxing a parking lot’s capacity. For this reason, a center’s anchors may resist bringing a school to the site.

“You have to be considerate of your co-tenants,” says David Ledbetter, vice president of leasing for R.H. Ledbetter Properties in Rome, Ga. “You have to get their permission. And if it doesn’t work, it’s certainly understandable.”

“In good times, schools are not the greatest tenant in the world, because they eat up your parking,” says Allen Brown, senior vice president of retail with Grubb & Ellis in Atlanta. “But in bad times, they’re really great tenants, because they eat up your parking,” which makes the shopping center look fuller. “They get rent in,” Brown adds. “And they put butts in seats.”

Schools may have to get a zoning variance to set up shop among retailers, though brokers say these are generally not difficult to obtain.

For a school, finding a home at a shopping center can make perfect sense. Though a retail location might at first seem like an unlikely match, adults seeking continuing education don’t need to be seduced by pristine campuses to enroll. And unlike retail outfits, schools rarely depend on signage or visibility from the street to drum up interest—their customers have already sought them out via other venues. This allows schools to move into spaces that may be less desirable to other potential tenants.

Good health
Several landlords and schools in Florida and Georgia attest to favorable deals that have been struck just in the past year. These deals are coming at a time when the both states are experiencing high vacancy rates. For example, neighborhood and community centers in Atlanta have a vacancy rate of 12.9 percent, according to New York City-based research firm Reis Inc. That’s up from 11.1 percent at the end of 2008 and higher than the national rate of 10.0 percent.

One example of the kind of deals getting done involves the Shorter College School of Nursing in Rome, Ga., about 70 miles northwest of Atlanta. Anticipating a launch in fall 2010, the nursing school has moved into Riverbend, a 271,000-square-foot, mixed-use power center in Rome whose retailers include restaurants, Kroger, Pier 1 and Barnes & Noble. Shorter moved into an office six months ago vacated by a medical practice that had downsized. The nursing school now occupies 9,500 square feet in the 20,000-square-foot building, which will host its first-year class of about 30 students. Riverbend is just about two miles from Shorter’s main campus.

By moving into Riverbend, the school was able to avoid shelling out for the construction of a brand new building, says Ledbetter, “a great alternative.” The school expects to occupy the entire building within the next five years.

The layout of Riverbend helped to alleviate any parking difficulties Shorter and Ledbetter could have encountered. Riverbend’s office buildings, which house a relocated doctor’s practice and other medical facilities, lie behind the retailers. “They each have their own separate entrances and their own personalities,” Ledbetter says. The parking field for Shorter is nowhere near the retail parking lots.

Ledbetter and his retailers appreciate the addition of several hundred potential customers coming to the site each day. “It’s really an enhancement for the center if you get the right school,” he says. Furthermore, the nursing school’s proximity to the medical offices allows the doctors to hire nurses from right next door.

Ledbetter and Shorter administrators confirmed that the school is also weighing whether to move its business school into another Ledbetter retail property in Rome, but would not share additional details as the deal remains unresolved. That move could occur by early next year.

Back near Atlanta, in the affluent suburb of Sandy Springs, Gwinnett College has moved one of its three Georgia campuses into the Sandy Springs Crossing shopping center. There it occupies 11,000 square feet in a space previously rented out for parties and weddings, according to Michael Davis, Gwinnett’s president.

The Gwinnett campus was previously housed behind a shopping center in nearby Dunwoody. Gwinnett began seeking a new space when the launch of a massage program boosted enrollment from 280 to about 400. “There’s no doubt that when the economy is down, our business goes up,” Davis says.

The school found itself needing more classrooms and parking, and Davis was also not satisfied with its visibility. It was in a freestanding building behind a Kroger and other retailers, far from the nearest busy road and with no signage. “Nobody knew where we were,” he says. “Now we’ve got about 45,000 cars a day going by.” Finding adequate parking did pose a problem—Davis says Gwinnett looked at 20 locations that ultimately were unable to accommodate his students. At the Sandy Springs center, Gwinnett students park in spaces set aside for them, away from retailers.

In transition
The toll Florida’s glut of foreclosures has taken on retailers in the state has been well documented. Yet the prevalence of homes going for cut-rate prices has also given a boost to real estate companies, which have been taking on additional employees to handle the extra business.

This created an opportunity for Larson Educational Services, a school in Fort Myers specializing in licensing and continuing education for mortgage brokers, real estate agents and community association managers who run Florida’s multitude of gated communities. The family-run school opened its doors in November 2008 at Royal Palm Square, a mixed-use office and retail site undergoing a transitional phase.
“What really worked for us was finding a place that didn’t work for anybody else,” says Brad Larson, a co-owner and general manager of Larson Educational Services. The school had struggled to find a suitable and affordable space in Fort Myers. Although retailers were already showing reluctance to expand in Florida last fall, property owners were asking high prices—around $25 per square foot, Larson says. “The prices weren’t reflecting the vacancy rate,” he says, but landlords remained unwilling to cut a deal.

Larson also sought adequate parking—one lease fell apart because the property’s 250-space lot couldn’t handle the 40 or 50 students who would be attending the school at any given time. “Every single space we looked at—not a one of them has a tenant in them right now,” Larson says.

Then the school found Royal Palm Square. Its network of paths crisscrossing around fountains and palm trees made it an attractive destination for Fort Myers shoppers. But larger malls opened and began drawing away customers, and a new bridge cut off a main artery to the center, diminishing foot traffic. Royal Palm Square began to lose retailers, and rents fell.

Today, the property’s courtyards make it a less appropriate fit for most retailers, says Robin Mathews, vice president of asset management with Stavins and Axelrod Properties, which owns Royal Palm Square. But Larson doesn’t require the drive-by visibility that some retailers might seek.

Larson’s new two-classroom facility occupies a space made from three separate units, which included a clothing store and an administrative office. Because the school was short on cash when it moved into Royal Palm Square, it had most of the $55,000 it spent on building out the space rolled into its lease. Larson is paying $16 per square foot at the 3,600-square-foot location.

Brad Larson says the site is proving to suit the school’s needs. It is easy to access from nearby Cape Coral and other areas. And other vacant units nearby are boxlike spaces well-suited for additional classrooms. “There’s an opportunity to build a campus here,” he says.