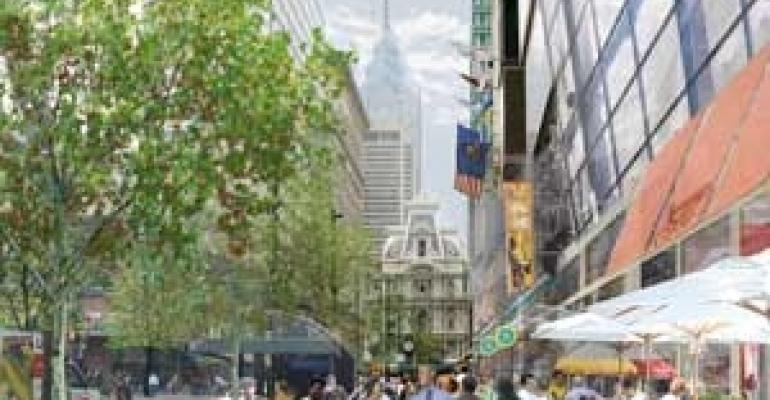 American Cities are Revitalizing Their Downtowns and Recreating Their Profiles

The push toward downtown revitalization that began in the 1990s has survived the Great Recession.

Clemente’s shoestring-budgeted campaign to recruit retailer Trader Joe’s, including a YouTube video in which residents give humorous answers to the question, “What would you trade for Trader Joe’s?” has already succeeded in differentiating the city from “the other 50 cities in Florida that are trying to get a Trader Joe’s” and starting a dialogue. “We know we’re fighting for tenants and investor dollars and consumer dollars with other areas, malls and midsize cities in our region,” Clemente says. “So when we go out there to recruit, we do the best job we can with limited resources to set ourselves apart.”

Clemente’s experience is typical of American cities, regardless of size or location. Yes, the movement to reinvigorate Main Street is back, but it’s very different than it was 20 years ago. For today’s urban downtowns, development means redevelopment, and attracting redevelopment dollars means reinventing a city’s identity.

A city’s individuation is crucial, especially in difficult economies, says Alan Greenberger, Philadelphia’s deputy mayor for planning and economic development. Cities “live on the back of a story about themselves,” he says. “And sometimes it might be old and outdated.”

For instance, Philadelphia is still perceived as a declining, tough, blue-collar city rife with crime and social issues, Greenberger notes. “It’s not the city it was 50 years ago, so part of our job is to tell that story effectively so people start to understand what this new 21st-century Philadelphia looks like,” he says. “That’s the critical thing: Change the narrative.”

Today’s Philadelphia is hot: 90,000 people live downtown and 200,000 work there, 59 percent of whom walk or take mass-transit to work, says Greenberger. More of its migrants are being retained than ever, putting Philadelphia on Forbes’ recent list of America’s top 10 “comeback cities.”

In the end, the recession could turn out to be the impetus for American cities forging 21st-century identities.

“People still talk about when SoHo became SoHo in New York, or when the area around Faneuil Hall in Boston was developed, or Lincoln Park in Chicago,” says Newark's Brick City Development Corporation CEO Lyneir Richardson. “That’s what’s happening right now. Forward-thinking companies, retailers and urban dwellers are seeing that and lining up.”

In comparison to neighboring New York City, Jersey City and Hoboken, Newark remains affordable for both businesses and residents with market-rate commercial and residential properties still being built.

Newark’s median single-family home listing price as of March 14 was $191,663, according to Trulia.com.

But despite its prime location and affordability, Newark has been plagued by a history of violence, mismanagement and corruption.

“When I joined [BCDC in 2009], the goal was, ‘Can you get projects in the pipeline and take them to the finish line?’” Richardson recalls. “We had a whole lot of opportunities and developers and projects around.” But financing dwindled when the debt markets came to a standstill.

In 2010, Newark was one of five cities to receive funding from Living Cities, an international collaborative of 22 foundations and financial institutions. Richardson calls 2011 “Newark’s groundbreaking year,” with approximately $700 million in new development starting.

But Newark’s biggest coup is Panasonic’s decision to relocate its North American headquarters there from nearby Secaucus. Panasonic chose Newark, says Newmark Knight Frank Principal Tim Greiner, in part due to $102.4 million in Urban Transit Hub Tax Credits. “Because these incentives in New Jersey are driven at the state level, those cities with the best economic development team and local city leadership have benefited the most,” says Greiner.

Panasonic has signed a $200 million, 15-year lease with building developer Matrix Development Group to bring 1,000 employees to a LEED-certified, 14-story tower, now under construction adjacent to Newark’s One Riverfront Center.

Newark’s redevelopment plan was devised with three distinct phases: commercial, residential and retail, says Richardson, and is now moving into the final, retail phase and facing “pent-up demand.” Newark has grown 5 percent since the 2000 Census, and is predicted to grow another 6 to 7 percent by the next Census.

“We’ll get to 300,000 people, many of whom will be in our CBD,” he says. “We’re telling retailers that now is the time you should be starting to connect with developers and thinking about the change and the resurgence that’s happening in Newark.”

Between 2004 and 2008, 21,603 condo units were built in Downtown Miami, according to a study released in February by the Miami Downtown Development Authority (DDA).

Then the crash came, turning Miami’s downtown into a ghost town. Between 2009 and 2011, just 1,382 units were completed. Analysts predicted it would take more than 10 years for the empty units to be absorbed, let alone “for a construction crane to appear,” says Miami DDA Executive Director Alyce Robertson.

But a renewed demand for affordable urban living is bringing thousands to Miami’s urban core. According to the Miami DDA report, 93 percent of the boom-time condo units are now occupied, mostly with full-time owners and renters.

The unsold inventory of new units has declined more than 25 percent since December 2010, according to the study. Strong rental market demand has driven the occupancy level in Miami’s new downtown condo units, up from 74 percent in 2009 to 86 percent in 2010 to a current level of 93 percent.

And, according to the study, seven residential towers with a total of 3,026 units are proposed or under construction for downtown Miami. An 18-story, 96-unit tower, 23 Biscayne Bay, is scheduled for completion in 2012. Four other projects will break ground this year: 28-story, 192-unit My Brickell; Brickell CitiCenter, twin 40-story towers with 755 units; Resorts World, twin 65-story towers with 1,000 units; and Brickell House, a 46-story, 374-unit tower.

“What was arguably the worst real estate market in the country following the 2008 crash now stands out as one of the strongest,” says Robertson.

What’s driven Miami’s “condo comeback” since 2007, says Robertson, is an influx of cash-rich buyers from Latin America, Asia and Canada, who are attracted by strong exchange rates, Miami’s low real estate prices and, in some cases the need to flee political turmoil. In particular, Brickell House, launched last October by Venezuelan developer Newgard Development Group, has sold more than 65 percent of its units, mostly to Latin Americans, Canadians and Northeast buyers.

What changed, says Robertson, was that, “For the first time in Miami’s history, quality inventory existed in its urban core, which was not the case even 10 years ago. ... Miami clearly had an appetite for vertical development in an urban setting. With the infrastructure now in place, residents and businesses are moving in.”

In March, Miller Beer announced it will relocate its Latin American headquarters from Bogotá to Miami’s new class-A, 35-story 1450 Brickell office tower. Details have not been released, but Miller is expected to bring 50 to 70 employees to occupy a full floor.

Miami DDA has been leveraging its own funds along with federal, state and local funding to launch major infrastructure and transportation projects, says Robertson. Initiatives include a passenger rail linking Miami, Fort Lauderdale and Palm Beach, an airport train, a Port Tunnel cargo and a trolley.

In 2010 and 2011, Oklahoma City ranked among the world’s top metropolitan economies for income and employment growth, according to the Brookings Institution’s Global MetroMonitor report, released in January. Oklahoma City was 82nd among cities across the U.S., Europe, Asia and Latin America.

“OKC” has also expanded beyond its energy-based economy by building strong aviation, tech, biomedical and tourism industries, says Mayor Mick Cornett, currently serving his third term having received 58 percent of the vote in the last election.

Dell Computer brought its campus to Oklahoma City in 2009, and Boeing, which relocated there last year, is currently hiring for over 1,000 jobs. Over the past eight years, this city of 1.3 million people has created 80,000 new jobs, Cornett notes, and gained its own NBA team—the Oklahoma City Thunder—along with a brand new sports arena.

Still, OKC isn’t diversified enough, says Cornett. “The energy sector grows so fast on its own, it’s hard to diversify fast enough,” he explains. “But it’s a really good problem to have. The energy sector is so successful…I don’t want them to slow down, but it’s a challenge for the rest of us to try and keep up.”

That’s quite a turnaround for a city hit hard by the 1980s energy crisis, severe natural disasters—including a 1999 tornado outbreak—and the tragic 1995 bombing of its Alfred P. Murrah Federal Building.

All of these events destroyed the city’s brand, says Cornett. But these very crises ultimately allowed OKC to redefine itself. “In Oklahoma City, there’s a sense of unity that may have been solidified by the bombing experience,” Cornett says.

Perhaps that’s why a limited-term one-cent sales tax initiative has been voted in three times since the early 1990s to pay for OKC’s capital improvements. The first vote, recalls Cornett, “was basically an act of desperation,” following the 1980s banking and energy crisis. “We had struggled for years to try and develop some traction and get our economy going again and we weren’t having any luck,” he says. “Finally our leadership said, ‘We ought to try to stop incentivizing businesses to come here; why don’t we just create a city where those businesses want to be?’”

MAPS 3, the latest iteration of the one-cent sales tax initiative, began in April 2010 and ends in December 2017. It funds eight projects and is estimated to raise $777 million. Cornett believes residents support the tax because of Oklahoma City’s strong brand and “the fact that there’s construction everywhere you look.”

At the heart of Oakland lies Broadway, stretching three miles from the Oakland Hills to a spectacular yet underdeveloped waterfront area. In between, the Uptown entertainment district (Grand Avenue to 19th Street) boasts theaters and an arts community that is attracting pop-up galleries. The Downtown CBD (12th to 19th streets) is abundant with historic office buildings.

Boyer, who has managed the 1 million-sq.-ft. Kaiser Center since Swig acquired it in 2005, says the building, is now certified LEED Gold. The Kaiser Center is only one of Uptown Oakland's attractions. The area has a thriving restaurant community and features the historic Fox Theater, which reopened in 2009.

Boyer is also Uptown president of the board of the jointly-managed Uptown and Downtown Community Benefits Districts, whose self-imposed tax generated $2 million to provide beautification and an ambassador program to maintain clean streets, “change the perception of safety and engender a feeling of community,” says Boyer.

In 2008, Oakland conducted a citywide retail survey, says Gallo, which found that each year about $1 billion in retail sales tax activity occurs outside Oakland. This translates to a loss of approximately $10 million, not to mention a significant amount of retail jobs. The city identified more than 40 potential neighborhood shopping areas and began drafting a plan for land use for the Broadway-Valdez District—the area encompassing Broadway and a block on either side of it between Interstate Route 580 and Grand Avenue—to address its retail needs and find alternative funding options.

With state redevelopment funding having been cut in California, revitalization has become next to impossible. But as one of four cities selected for a 2012 fellowship in Public Leadership in Land Use by the Urban Land Institute’s (ULI), even “without the luxury of redevelopment” and “with the need to be selective in how we use limited resources,” Oakland is poised for critical change, says Gallo.

A ULI panel, visiting in February, recommended focusing on three areas: Broadway-Valdez, Uptown and Jack London Square, a mixed-use waterfront development named for the writer, who lived in Oakland.

“Our residents and employees and big developers and office tenants have said they want Oakland to be more of a 24-hour downtown, but they want it safe and clean,” says Gallo. According to ULI’s panel, Oakland has “tension” between various land uses. “We’re not Pollyannish,” she says. “Yes, we have safety problems and we have to stop the retail leak … We have to brand and market better and learn to use tools that are out there, like new market tax credits.”

Ultimately, Oakland will prevail, says Gallo, because, as the ULI panel discovered, “Oakland’s greatest strength is everyone here believes in Oakland.”