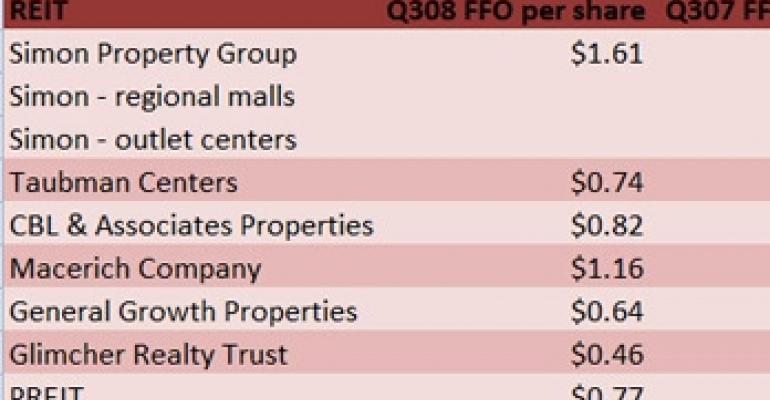 Regional mall REITs turned in a solid performance in the third quarter of 2008, amid increasingly grim same-store sales results and reports of crimped consumer spending. Of the seven REITs, three missed analyst’s consensus estimates while the majority beat estimates.

Simon Property Group, Taubman Centers, Inc., CBL & Associates Properties Trust and Glimcher Realty Trust, exceeded estimates by as much as $0.04 per share for the three months ended Sept. 30. Macerich Co., PREIT and General Growth Properties missed analysts’ consensus estimates during the period by $0.03 per share to $0.12 per share.

“It’s a very tough environment, but I think most of the management teams are making some pretty good efforts,” says Rich Moore, an analyst with RBC Capital Markets. “From a guidance standpoint, malls were in the middle of the pack,” when compared to the rest of the REIT universe.

Simon Property Group beat consensus estimates by $ 0.04 per share, with FFO growth of 10.3 percent to $1.61 per share compared to the third quarter of 2007. The Indianapolis-based REIT posted same-store NOI growth of 1.9 percent for its regional mall properties and 7.7 percent for its outlet centers. However, occupancy at Simon’s 242-million-square-foot portfolio declined 20 basis points at its regional malls to 92.5 percent; and 80 basis points to 98.8 percent at its outlet centers.

“While we believe Simon is a leader in its peer group, we do not believe it is exempt from the current economic environment,” wrote Carol L. Kemple, an analyst at Hilliard Lyons.

Both CBL & Associates Properties and Glimcher Realty Trust beat consensus analyst estimates by $0.02 per share during the third quarter.

Glimcher posted FFO per share of $0.46, down 8.0 percent compared to the same period in 2007, and an NOI decrease of 1.0 percent. Occupancy at Glimcher’s 22.1-million- square-foot portfolio dropped 90 basis points, to 92.6 percent, a moderate adjustment, cited Hilliard Lyons analyst John Roberts.

Taubman Centers beat estimates by $0.01 per share, with FFO growth of 8.8 percent, to $0.74 per share. Occupancy at the Bloomfield Hills, Mich.-based REIT’s 24.5-million-square-foot portfolio went up 40 basis points, to 90.6 percent. Its same-store NOI rose 5.7 percent.

PREIT, a Philadelphia-based REIT with a 26.1-million-square-foot portfolio, missed analyst estimates by $0.05 per share. PREIT posted FFO per share of $0.77, representing a decrease of 33.6 percent from the third quarter of 2007. The company’s same-store NOI fell 1.4 percent.

Macerich Company, based in Santa Monica, Calif., missed consensus estimates by $0.03 per share. Its FFO per share grew approximately 1 percent during the quarter, to $1.16 per share. Occupancy at Macerich’s 81-million-square-foot portfolio slipped 70 basis points, to 92.8 percent.

Beleaguered General Growth Properties missed consensus estimates by $0.12 per share. It posted an FFO decrease of approximately 5.9 percent, to $0.64 per share. The Chicago-based company’s NOI declined 1.8 percent and occupancy within its 180-million-square-foot portfolio dropped 50 basis points, to 92.7 percent.