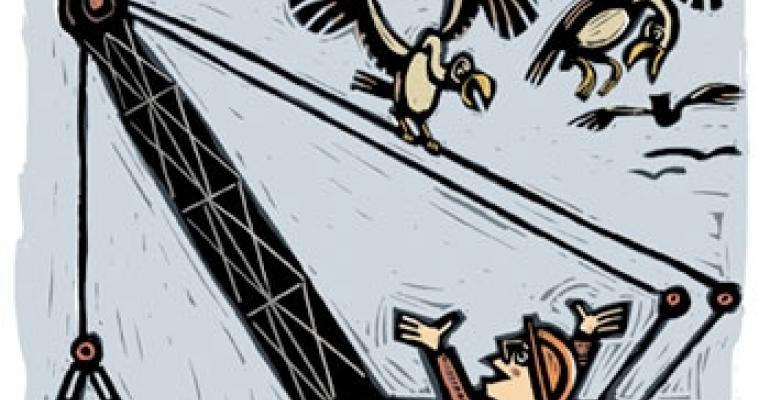 As Steven B. Rivers, senior vice president and general manager with Hardin Construction Company LLC, an Atlanta-based general contractor, looks over the firm’s forecast for this year, he expects the volume of retail projects Hardin constructs to be down significantly from both 2008 and 2009. For the past two years, Hardin has completed between $150 million to $170 million in retail work, a lot of it comprised of large projects that began construction back in 2007. In 2010, as that backlog is completed, the firm’s volume will likely shrink to just $30 million to $40 million and will take the form of smaller work orders: expansions and store conversions rather than multi-tenant outlet and power centers.

The reasons for the cutback on retail work are manifold and include developers’ continued difficulty in obtaining construction financing, as well as low demand for new retail space. After all, the vacancy rate for regional malls in the fourth quarter of 2009 reached 8.8 percent—an all-time high, according to Reis, Inc., a New York City-based research firm. The vacancy rate at neighborhood and community centers was at an 18-year high of 10.6 percent. In other words, there’s a lot of slack in existing projects that needs to be filled before there is enough demand to justify a wave of new construction.

As a consequence, many contractors find themselves in the same boat as Hardin. For example, William DiSanto, president of Englewood Construction, a Schiller Park, Ill.-based general contractor, notes that in a normal cycle, by the middle of a given December, 40 percent of Englewood’s work in the coming year would be locked in. In December 2009, however, many of Englewood’s retailer clients couldn’t confirm whether they would green light new stores. Some were uncertain they could secure the necessary financing to fund construction. In addition, most were waiting for the final holiday sales numbers before committing to new projects, DiSanto says.

This is putting pressure on both general contractors and sub-contractors, who survived 2009 largely through a combination of aggressive cost-cutting and backlogs of projects left over from the boom years. To deal with the low demand for retail, many traditional retail contractors are now trying to broaden their scope to other property sectors. Hardin, which has always done work in other sectors, has made more bids for student housing and healthcare projects, as well as competing for government building contracts. Other firms are looking into multifamily, as that sector is expected to recover more quickly than other commercial property types.

"I think 2010 is going to be very, very slow for retail development," syas Rivers. "That's not to say there won’t be any retail projects built there are certain locations that are just ideal sites and some tenants are still out there looking to open new stores in new markets. But instead of opening 40 stores a year, some of the larger big-box retailers are looking to open five. Domestically, we could be in for several years of a retail drag. I don’t think it’s going to come back to the way it was two or three years ago for maybe seven to ten years.”

The good news is that, as is the case with other real estate indicators, construction statistics are beginning to look less devastating than they did for most of last year. In November, construction spending in the commercial sector, comprising retail, warehouse and farm projects, declined just 1 percent from the month prior, according to the Associated General Contractors of America (AGC), a national trade association. (Year-over-year spending declined 41 percent).

In December, the Bureau of Labor Statistics (BLS) recorded 53,000 construction jobs lost, but the number was still a vast improvement over the 117,000 in average monthly job losses the sector recorded during the first half of last year. The unemployment rate among construction and extraction workers reached 22.5 percent, but was down from the high of 22.8 percent in February 2009. Overall, since the start of the recession, the construction industry lost 1.6 million jobs, the BLS reports. Through the first half of 2010, the market will likely remain in this “slow mode,” according to economists, but by the end of the year, it should start improving.

“It’s going to be another ugly year, but it will be the last one. 2011 will be better,” says James Haughey, chief economist with Reed.

The lingering fallout from the downturn is becoming evident in every aspect of the retail construction process, from pared down staff to lower job pricing to much smaller projects. Rivers notes that during ICSC’s CenterBuild conference in December, he encountered some architecture firms that had cut staffs down from 70 people to 10. In the course of 2009, Hardin has reduced its own staff by...

approximately 25 percent, though Rivers hopes there won’t be need for more cost-cutting in 2010 since the firm does a wide scope of work, not just retail. That might not be the case for contractors that specialize in commercial construction—in November, most of the job losses in the construction industry were among non-residential specialty trade contractors, according to the BLS.

“There will be some additional layoffs in non-residential building and specialty contractors—engineering, mechanics—will be let go,” says Haughey. “We’ll probably see some more job losses over the next couple of months, but it will be 20,000 a month, not 50,000.”

In fact, some firms that managed to slog through 2009 thanks to a backlog of previously secured projects, might not survive another slow year, notes Ken Simonson, chief economist with AGC. Contractors whose major clients are struggling or have gone bankrupt could be the first to go—last year, for instance, brought with it the bankruptcy of John Vratsinas Commercial Builders Inc., a West Des Moines, Iowa-based general contractor, which has done work for General Growth Properties and for Circuit City. (The company successfully emerged from Chapter 11 on June 4, 2009.) Bankruptcies and liquidations mean loss of potential revenue on new projects while, at the same time, it might take longer to receive payment for work that has already been completed on behalf of the bankrupt client.

“I think this will be the area where people will be challenged to get over the wall and sustain it if they can," says Matthew Schimenti, president of the Retail Contractors Association. "If they won’t sustain it this year, they won’t sustain it. I don’t think the industry has that much activity in the market that it will stabilize businesses that are not healthy. If they can’t make it through this year, it will be a challenge.”

Smaller contractors that have drastically cut their prices to remain competitive in today’s marketplace might also be at risk, adds Rivers. Last year, they might have taken some losses to keep working, planning to make up the gaps in their budgets once the economy improved in 2010. But in the absence of a strong turnaround, they may face bankruptcy instead. This year, there will be few, if any, new mall or shopping center developments started, according to Haughey. Any retail projects that do go ahead will likely be small, including freestanding stores for big-box retailers and restaurant franchise operations, in-line build-outs for some expanding international chains and inexpensive renovations at the larger properties. Considering current market conditions, the relatively low number of contractor bankruptcies in 2009 came as a surprise to industry insiders.

Given the limited amount of work, bidding wars have been getting increasingly fierce, says Rivers. Where in the past Hardin would go against three or four other contractors on retail projects, today the figure can often go up to a dozen. And some of those bidders might include very large, national corporations that in normal times would concentrate on mega-projects and stay away from smaller work like store build-outs. (When it comes to government projects, the pool of competitors can be 25 firms deep.)

At the same time, in a more competitive environment, contractors are lowering what they are asking for in the hope of winning new contracts. Haughey, for example, estimates that the cost of sub-contractor labor has gone down by as much as 15 percent. When lower materials costs are factored in, the cost of building a new project might be 20 percent lower compared to 2008. In the 12-months period leading up to December 2009, the producer price index for gypsum products declined 8.2 percent, according to AGC. For asphalt paving mixtures and blocks the decline was 15.8 percent, and for concrete, 1.2 percent. The producer price index for diesel fuel declined 3.7 percent.

Contractors face another danger this year as well—the possibility that the projects they are working on may be repossessed by banks, which can appoint different developers to finish the job. The most prominent example of this is the Block 37 development in Chicago, which was ordered into receivership by its primary lender the Bank of America at the end of December. Because of a loan default on the part of Block 37’s developer, Joseph Freed & Associates, plus disputes over leasing fees, Bank of America is withholding the $72 million it would take Joseph Freed to complete the work. In a situation like that, the project’s contractor might be caught in the crossfire. (The general contractor for Block 37, W. E. O’Neill Construction Co., did not return calls for comment).

Meanwhile, in Phoenix, Capmark Finance has just foreclosed on the first phase of CityNorth, a 144-acre mixed-use development being built by Klutznick Co. and the Related Cos. Because of the project’s timing—it opened in the fall of 2008—many of the retailers that committed to CityNorth had cancelled or delayed their plans. Now, Klutznick and Related are $290 million in debt and have been forced to stop construction on subsequent phases of the project until new financing becomes available. Hensel Phelps Construction, one of the general contractors behind CityNorth, declined to comment on the story. The other general contractor, Sundt Construction Inc., did not return calls.

Normally, if a developer fails to pay a contractor for the work completed, the latter can file a mechanical lien. If the claim is legitimate, the contractor can hope to get paid in full, says DiSanto. But in a situation involving foreclosure or bankruptcy, the chances of recouping 100 percent of the costs decline considerably. Meanwhile, as lending institutions try to work through the backlog of defaulting commercial loans on their books, development projects are likely to be the first to be foreclosed upon, according to industry sources.

All this may sound like a tough break for general contractors, but retail developers can actually benefit from the current environment. Building a new mall or shopping center has not been this cheap in a long time, says Haughey. He estimates that developers have an opportunity window of about five to six months to get their shovels in the ground before materials and labor prices start to climb back up.

“I would encourage property owners and developers who are thinking about doing construction at some point not to tarry,” says Simonson. “Materials prices have been showing signs of having bottomed out and this is an ideal time to do construction. You are getting the best prices on materials and the best choice of competent contractors who are ready to go to work. Both of those things could change without a warning.”