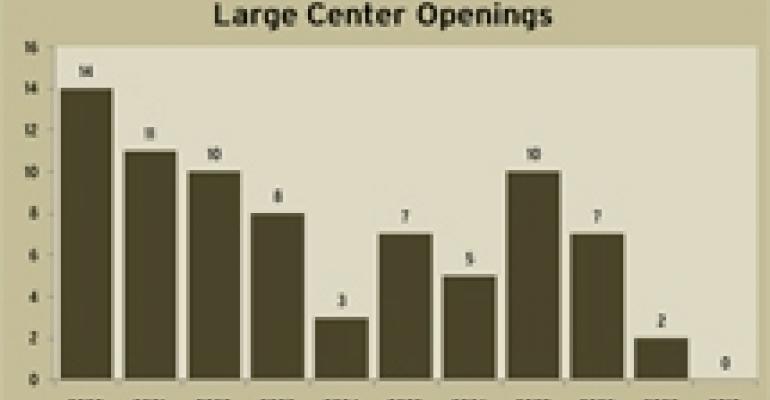 Optimism is returning to the retail real estate sector, especially with increased willingness on the part of retailers to talk about expansion plans and leasing activity on the rise. As a result, the national vacancy rate seems to be peaking. In addition, retail sales were strong during much of the first half of the year, although results have softened of late. Yet one part of the business remains moribund: Development.

Research from Colliers International (along with data from ICSC) shows that no large shopping centers will open in 2010—the first time that’s happened in the industry. Even last year two large properties opened. Overall, in the 44 markets Colliers covers the brokerage firm counted just 1.3 million square feet of new construction and 6.9 million square feet of centers under construction during the first quarter.

“While there may be a few markets that prove to be exceptions, we don’t anticipate any significant rental rate growth that would justify new construction until 2012 at the earliest,” Colliers wrote in its Spring 2010 Retail Highlights report. “Existing properties can still be had at prices well below replacement costs. Expect little retail development for at least the next three years. What little development there will be will mostly be in the form of urban redevelopment projects and a limited number of single tenant build-to-suits.”

In tracking the construction taking place, Colliers found that neighborhoods centers are the dominant type of assets under construction. It estimates that in 27 percent of 41 markets, neighborhood centers are the primary form of development taking place. Other popular formats include freestanding retail (20 percent) and mixed-use (20 percent). Community centers (2 percent) and enclosed malls (2 percent) remain rare.