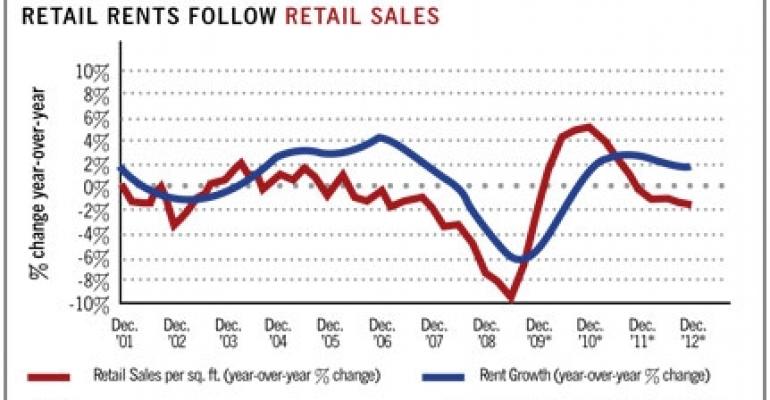 PPR projects a 6% decrease in U.S. retail rents on a year-over-year basis in 2009. That’s on top of the 4% decline realized in 2008. “The bankruptcies can be devastating to landlords with exposure to those tenants, but having exposure can be hit or miss across centers,” says Mulvee. “Today's rent concessions are much more broad based.”

When retail sales plummet, the pressure on retailers to control their rent expense goes up, explains Mulvee. “When those revenues fall, they go back to their landlords and say ‘Hey, I need a break.’” That, plus an increase in dark space is driving down rental rates quickly.

Given the spate of retail bankruptcies and store closures, the national vacancy rate is expected to reach 17% by mid-2009, up from 11.8% in mid-2008, says Mulvee.

Victor Calanog, director of research for New York-based research firm Reis, is not surprised that total retail sales have declined. “We should note that more than half of this 2.7% decline was due to the collapse in gasoline prices,” he says.

In 2008, there was also a historic decline in absorption for neighborhood and community shopping centers, according to Reis. For 2008, net absorption of retail space was a negative 9.2 million sq. ft., including negative 4.1 million sq. ft. in the fourth quarter.

Fourth-quarter retail rents also took a turn for the worse, according to Reis. Asking rents declined by 0.3%, while effective rents dropped 0.9%. “This is the single-largest quarterly decline in both asking and effective rents on record.”

While Reis is still finalizing its 2009 forecast, Calanog strongly hints that real estate fundamentals will continue to deteriorate. “We’re expecting a rise in vacancy through 2010 at levels we’ve never seen before for neighborhood and community centers. We also expect declines in asking and effective rents.”

Another indication of a weak retail sector is the decline in total consumption, which includes goods and services. The seasonally adjusted annualized pace of consumer goods was a negative 2.5% in the fourth quarter, according to the Commerce Department. “The last time that consumption of goods fell negative on a year-over-year basis was in 1961,” Mulvee says.

When will retail sales recover? “It’s easier to predict, harder to imagine,” says Mulvee. “Now that we’re in the throes of a recession, it’s hard to imagine that things will get better. But it’s a good time to keep in mind that the natural state of the U.S. economy is growth.”