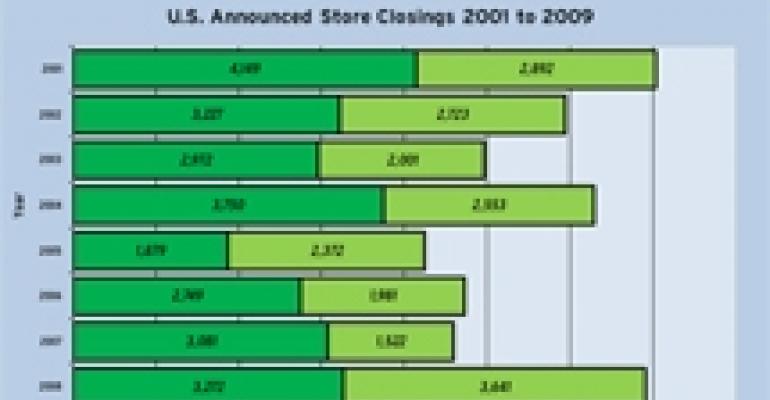 Store Closings Could Keep Piling Up Throughout First Half of 2010

With Movie Gallery announcing the first major bankruptcy filing of the year, retail real estate professionals are starting to get a handle on what 2010 will look like in terms of store closings.

So far the pace of announced closings has been noticeably slower than in 2009, when a glut of retailers announced mass closures, bankruptcies or liquidations soon after the holiday shopping season concluded. By this time last year, seven major retailers had filed for bankruptcy and about a dozen others announced mass closings. That’s not how things have played out so far this year.

Wilsonville, Ore.-based Movie Gallery’s decision will create a hole as the movie and game rental chain closes up to 760 locations as it restructure, but there have been few other large announcements from retailers. The question is whether 2010 will remain quiet or if there is a spurt of closings still to come, which is what some experts believe will unfold.

“I don’t think there is going to be any improvement from last year on the store closings,” says Howard Davidowitz, chairman of Davidowitz & Associates, a New York City-based retail consulting and investment banking firm. “If the consumer is weak, and the consumer will be weak, there is no way retail can be strong. It just doesn’t work.”

Last year, the U.S. retail industry saw 4,763 stores closings, according to ICSC. The figure was an improvement over the 6,913 stores closed in 2008 and comparable to 2006, when a total of 4,730 stores closed doors. But the number may be deceiving as many retailers kept stores in business last year by asking landlords for rent relief, says Matthew Bordwin, managing director and co-group head of the real estate services team at KPMG Corporate Finance LLC, an investment banking and advisory services firm. Bordwin notes that in 2009 his firm handled thousands of rent renegotiation assignments on behalf of retailers and expects that in many cases for the stores to stay afloat, those rents will have to be renegotiated again in 2010.

“For the most part, the marketplace isn’t changing that dramatically,” he says. Those tenants that normally paid $20 per square foot and received a temporary concession to pay $15 per square foot in 2009 might have to go back to the landlord and ask to pay $8 per square foot to survive.

Altogether, Michael Scott Wiener, president and CEO of Excess Space Retail Services Inc., a national real estate disposition and lease restructuring firm, predicts retailers will likely close 6,000 stores or more in the first half of the year. By the end of 2010, store closings might reach the 8,000 mark, he says.

Meanwhile, there still isn’t enough demand from expanding retailers to fill that glut of space. In recent months a number of concepts, including electronics seller hhgregg and fast fashion chain Forever 21, have embarked on major expansion campaigns. But those tenants are few and far between, notes Bordwin.

Most expanding chains are looking at five or 10 new stores, not 500. As a result, the overall vacancy rate for retail properties in the U.S. reached 7.6 percent in the fourth quarter of 2009, according to a recent report from the CoStar Group, a Bethesda, Md.-based research firm. And the availability rate for retail properties, which tracks both vacant spaces and spaces that are being marketed for new tenancy by landlords even though the old tenant hasn’t left yet, is now at 9.9 percent—up almost 400 basis points from the low point of 6 percent in the early months of 2006.

In the near term, this may be tough on landlords, but in the end it will make the industry healthier, say the experts. Davidowitz, for example, notes that he does not view all store closings as a sign of weakness. In fact, he advises retailers to evaluate their real estate portfolios on a quarterly basis so they can keep track of underperforming stores and weed out money losers. He believes that retail property owners should do the same and start considering alternative uses for their space if it doesn’t seem to be attracting new tenants. Already real estate professionals report seeing churches, medical facilities and government agencies spring up on corners that used to house strip centers.

“There will be in the next five years, a reckoning in the real estate marketplace,” says Bordwin. “Owners are going to have to figure out alternative uses for [their spaces] because there just aren’t enough tenants. In A-class locations, rents may be down, but in the long-term you’ll always have tenants looking to get in. Most markets will absorb B-class locations again. It’s once you get into [tertiary markets], those owners will struggle.”