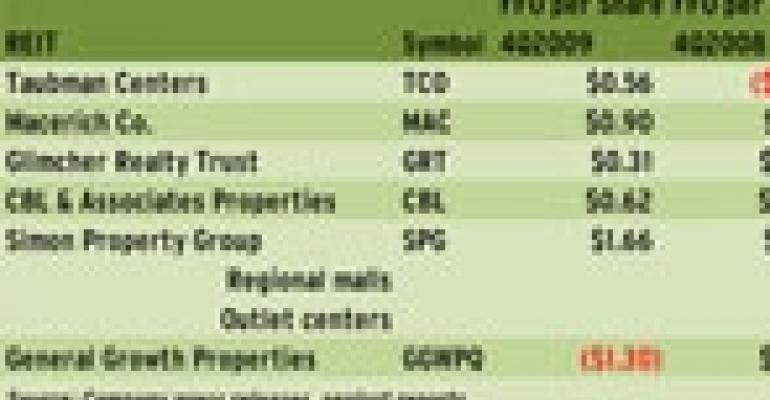 Regional mall REITs continued to get healthy in the fourth quarter of 2009 with stable sales and improved customer traffic. Given the lingering weaknesses in the economy, most insiders don’t expect rents or occupancy levels to spike significantly in 2010, but there is also less fear of retailer closings and bankruptcies or widespread rent relief requests.

Out of six regional mall REITs that have reported their results for the three months ended Dec. 31, three beat consensus analyst estimates, one missed and one was in line with analyst expectations. (Analysts do not have estimates for General Growth Properties currently.)

Simon Property Group (NYSE: SPG), CBL & Associates Properties Trust (NYSE: CBL) and Macerich Co. (NYSE: MAC) beat consensus estimates by a range of $0.01 per share to $0.14 per share. In the cases of Simon and CBL, the estimates did not take into account impairment charges both companies reported in the fourth quarter. Taubman Centers Inc. (NYSE: TCO) missed by $0.12 per share and Glimcher Realty Trust (NYSE: GRT) was on target. Analyst estimates in the latter’s case also did not account for impairment charges on undeveloped land and a fair value adjustment on a derivative instrument.

Meanwhile, in a report filed on March 1, Chicago-based General Growth Properties’ (OTC: GGWPQ) results for the fourth quarter of 2009 showed some effects from its bankruptcy proceedings, but also served as a testament to the underlying strength of its portfolio. The company lost $1.30 per share in core FFO, compared to a gain of $0.70 per share in fourth quarter 2008. And NOI in the three months ended Dec. 31 declined 7 percent, in part as a result of one-time charges related to bankruptcy claims and non-recurring property upkeep costs. Occupancy, however, remained high at 91.6 percent.

Overall, regional mall REIT executives sounded more optimistic about the future than their counterparts in the shopping center sector. Shopping center operators continue to worry about potential store closings and bankruptcies among smaller, independent tenants—partly because smaller retailers still have difficulty securing financing, according to Rich Moore, an analyst with RBC Capital Markets. The fact that regional mall operators rely primarily on national and regional retailers may explain their sunnier outlook for 2010. Moore notes that in the past two years, the nationals have become much savvier about preserving their capital.

“I think our bankruptcy season in the first quarter is going to be pretty modest for the national and regional guys,” Moore says. “I think everybody is going to be pleasantly surprised by the [fact] that retailers who’ve come through this recession are going to be much less likely to go bankrupt.”

In fact, portfolio occupancies for the mall players, with the exception of Bloomfield Hills, Mich.-based Taubman Centers, remained above 90 percent through year-end 2009 and most reported NOI declines were slowing. Meanwhile, Indianapolis-based Simon Property Group, with a 246-million-square-foot-portfolio, reported that in the course of last year, NOI for its regional mall properties increased 0.3 percent. The NOI for Simon’s outlet center portfolio increased 5.6 percent.

Regional mall REIT executives don’t expect a strong rebound in 2010, but note that enough tenants have showed an interest in expansion to ensure that occupancies this year will remain flat to slightly up.

“It’s hard to prognosticate what we’re going to be looking at in 2010, but I think most retailers are anticipating that sales will be at least equal to what they were in 2009 and hopefully up 3 percent or 4 percent,” said Arthur M. Coppola, CEO and chairman of the board with the Macerich Co., a Santa Monica, Calif.-based REIT, during the company’s earnings call with analysts on Feb. 11. “All of this has resulted in a retail sentiment that is far better than what we were looking at this time last year.”

Philadelphia-based PREIT is the only regional mall REIT yet to announce its results. It will report its numbers before the market opens on March 12.