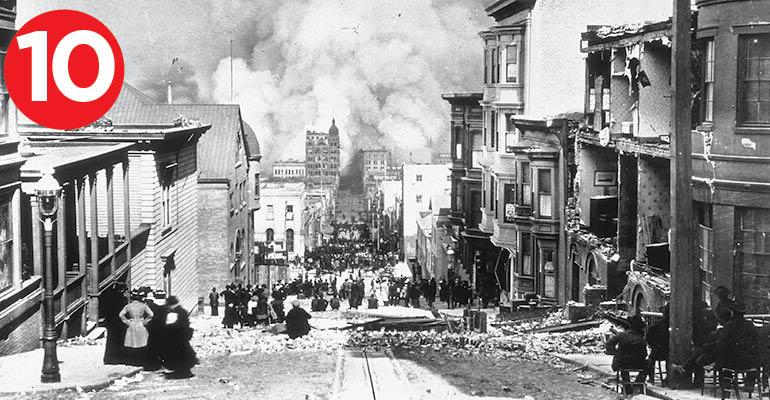 A leading economic index fell by 0.1 percent in December, reports MarketWatch. San Francisco is trying to strengthen its earthquake protections, according to San Francisco Chronicle. These are among today’s must reads from around the commercial real estate industry.

U.S. Leading Indicators Drop 0.1% in December in Sign of Slower Economy “The leading economic index fell 0.1% in December, perhaps another sign the U.S economy has slowed, according to the Conference Board. The index fell in two of the three final months in 2018. ‘The US LEI declined slightly in December and the recent moderation in the LEI suggests that the US economic growth rate may slow down this year,’ said Ataman Ozyildirim, director of economic research at the privately-run board.” (MarketWatch)

Getting San Francisco Set for a Major Quake: City Aims to Get a Solid Plan Ready “Staring at a growing skyline and the abiding threat of a major earthquake, San Francisco Mayor London Breed will hand down an executive order Thursday seeking to strengthen the city’s ability to cope when the Big One hits. Breed will instruct a range of departments to begin immediately crafting a playbook on what the city, its businesses and its people need to do in order to minimize damage from a major earthquake and make a full recovery.” (San Francisco Chronicle)

Gold’s Gym Is Taking Over Vacated Sears Locations “Residents of Middleton, N.Y., might be losing a Sears Holding Corp. location, but they’re gaining a Gold’s Gym. This January, Gold’s Gym, the 54-year-old health club company, will be opening a new location in what was once a Sears, the company told MarketWatch. Sears has closed hundreds of stores in recent years as its sales have collapsed, announcing 80 additional closures of both the Sears and Kmart banners just recently.” (MarketWatch)

Commercial Property Values Rise 35 Percent in Detroit Over Past Year “Commercial property values in Detroit rose 35 percent between 2017 and 2018 after the city completed its first citywide reassessment of commercial buildings in decades, Mayor Mike Duggan said Tuesday. The overall value of commercial property in Detroit rose $2.96 billion to more than $4.5 billion, according to data from the city assessor's office. Industrial property values made an 18 percent jump between 2017 and 2018, from $513 million to $629 million, according to the assessor's office.” (Crain’s Detroit Business)

Paralegal for Sears Bankruptcy Case Billed $174K in One Month “No one tops legal adviser Keri Grant for hours logged in Eddie Lampert’s Sears bankruptcy case. The Weil, Gotshal & Manges paralegal billed some $174,000 for November assessing the troubled retailer’s numbers for 431 hours at $405 a hour over the month, according to court documents. Grant — a real estate closing expert who researches titles, surveys and other documents related to assets — toiled 103 more hours than any partner, associate or support staff at the firm, which is representing the bankrupt retailer.” (New York Post)

Housing Proposed Above S.F. Firehouse “The city is preparing to sell off its fire station in Jackson Square to a residential developer, but it won’t be at a fire-sale price. Fire Station No. 13 at 530 Sansome St. is zoned for a 200-foot tower and is expected to fetch upward of $20 million. Proceeds from the sale will pay for a new firehouse on the same location, topped with luxury housing.” (San Francisco Chronicle)

Miami’s Pursuit of an MLS Soccer Stadium for Beckham Team Faces a New Lawsuit “Two lawsuits filed by a Miami attorney aim to derail the effort to redevelop a city-owned golf course into a stadium and commercial complex for David Beckham’s planned Major League Soccer team. One suit, filed late Tuesday, raises questions about whether the city correctly described the land that would be leased for construction of the complex. The allegations could throw another legal wrench in the gears of those who want to quickly craft a lease and seek approval from Miami commissioners — gears that had already been jammed by an earlier ethics complaint.” (Miami Herald)

Over 30 Percent of All U.S. Office Space Will Be Flexible by 2030 “According to JLL's latest research, Flexing Their Muscles: Markets to Watch in 2019, the U.S. office market is poised to take on significantly more office flex space in the coming year. ‘The world's top companies recognize there is no one-size-fits-all flexible approach, just like there's no one type of worker,’ said Doug Sharp, President, JLL Corporate Solutions, Americas. ‘Flexible space options allow workers and teams to select the right space to perform work each day in a location that will help realize their company's mission and their own ambitions.’” (World Property Journal)

Knotel on the Verge of Deal to Lease the Entire Flatiron Building “Knotel, the flexible office startup that aims to rival WeWork, is nearing a deal to lease the iconic Flatiron building. Amol Sarva’s company is preparing to sign a long-term lease for the 22-story building, which it plans to open as one of its flexible-office locations either later this year or in 2020, the Financial Times reported. The building’s landlord, GFP Real Estate, denied that a deal was ‘imminent’ at the property, and declined to comment further. Knotel did not respond before deadline.” (The Real Deal)

What’s Next for the Dallas Office Market “With roughly 4.6 million square feet of office space delivered last year—according to Yardi Matrix data—the Dallas-Forth Worth metro continues to be a corporate and talent magnet due to its business-friendly environment and relatively low cost of living. As of December, there were more than 4 million square feet of office space under construction, with Las Colinas as the top submarket in terms of ongoing developments.” (Commercial Property Executive)