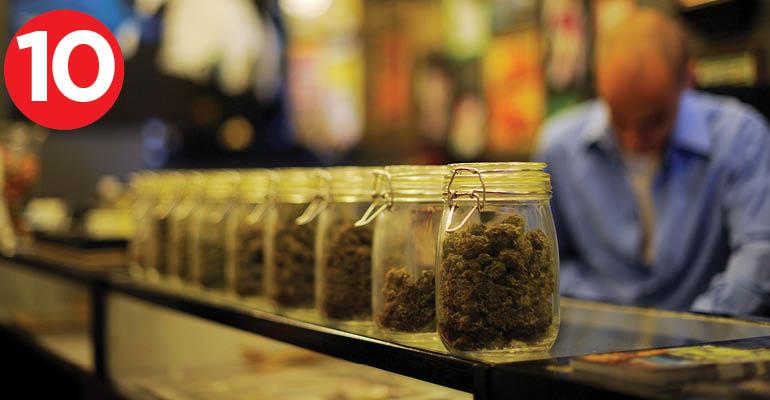 Blackstone Buying Vancouver’s Pure Industrial Real Estate Trust for $3.8 Billion “New York-based Blackstone Property Partners has signed a deal to acquire Vancouver’s Pure Industrial Real Estate Trust in a deal valued at $3.8 billion including debt. Under the agreement, Blackstone will pay $8.10 per unit in cash for Pure. The units closed at $6.72 on the Toronto Stock Exchange on Monday.” (Financial Post)

Malls May Be Dying, But Bets Against Their Debts Haven’t Paid Off “A rash of store closures and bankruptcies last year prompted some investors to bet against debt tied to the retail property sector. So far, at least, the bets haven’t paid off. The wager against commercial mortgage-backed securities largely has focused on the CMBX 6, a little-known credit default swap index.” (Wall Street Journal, subscription required)

Slow and Steady Growth: 2018 Performance Forecast for Top 4 Commercial Real Estate Sectors “Following one of the longest economic expansions in U.S. history, Colliers International economists forecast 2017 was the year of the market’s peak. There are several factors that indicate the cycle’s best years are in the past, Colliers International Chief Economist Andrew Nelson wrote in the company’s 2018 Outlook report, including slowing deal volume, eight consecutive months of declining commercial property prices, plateaued cap rates, a widening divide between seller asking prices and buyer bids and investors going in search of riskier assets for better returns.” (Forbes)

Target’s Plan to Pump $7 Billion Into its Stores Really Paid Off over the Holidays “Target’s $7 billion plan to fix its business paid off handsomely during the holiday season. The discount chain said on Tuesday that comparable sales, a gauge that strips out the impact of new and recently closed stores, rose 3.4% in November and December, well above its own forecasts and Wall Street’s expectations. Target also lifted its full year profit forecast and said it expects sales growth to continue in the new fiscal year that starts in February. Crucially, Target continued to get more customers into its stores.” (Fortune)

Why You Don’t Need to Worry About the New Marijuana Dispensary Next Door “Marijuana legalization opponents like Jeff Sessions may argue that “good people don’t smoke marijuana,” but as it turns out, homeowners could have far worse neighbors than marijuana retailers. Medical marijuana dispensaries weren’t linked with an increased rate of violent crime in their surrounding neighborhoods, according to a new study that analyzed crime rates in South Los Angeles by researchers at the University of California, Riverside.” (MarketWatch)

J.C. Penney Will Put Sears Out of Business, Retail Expert Says “While some brick-and-mortars fight to survive he increasingly competitive retail market, one expert tells FOX Business, J.C. Penney could survive the downturn while putting Sears out of business. Sears, who was once the largest retailer in the United States, has closed hundreds of stores over the years; 330 alone in 2017. Last week, the company announce that it was planning to close another 64 Kmart stores and 39 Sears stores.” (Fox Business)

Xceligent Founders Abandon Plans to Launch New Data Business “Doug and Erin Curry abandoned plans to launch a new commercial real estate data company, citing the specter of legal action by the trustee of their former employer, Xceligent. ‘Doug and Erin have been notified by the Trustee in the Xceligent bankruptcy that it intends to vigorously enforce our 2012 agreements that include nonsolicitation and noncompete language’ Erin Curry wrote in a statement shared with former employees and customers via Facebook and email that was reviewed by The Real Deal.” (The Real Deal)

How Did Office Employment Perform in 2017? “December’s payrolls report ‘showed a modest deceleration in employment, as total private sector job growth at the establishment level rose by 146,000,’ which was well below the 239,000 upwardly revised gain in November, according to a new report from Savills Studley. More specifically, office employment grew by 32,000 in December, which the report calls “a disappointment,” given monthly growth averaging 53,000 over the past year.” (Commercial Property Executive)

DC Cracks Top 5 in U.S. for Foreign Real Estate Investors “Foreign real estate investors continue to favor the D.C. metro region although the nation’s capital fell sharply when ranked against large cities internationally, according to an annual list from D.C.-based Association of Foreign Investors in Real Estate. Washington ranks No. 4 among U.S. cities for foreign investment this year, up from No. 6 last year. New York and Los Angeles tied for the top spot in this year’s survey of association members. Seattle was No. 3. And San Francisco ranked just behind Washington, at No. 5.” (WTOP)