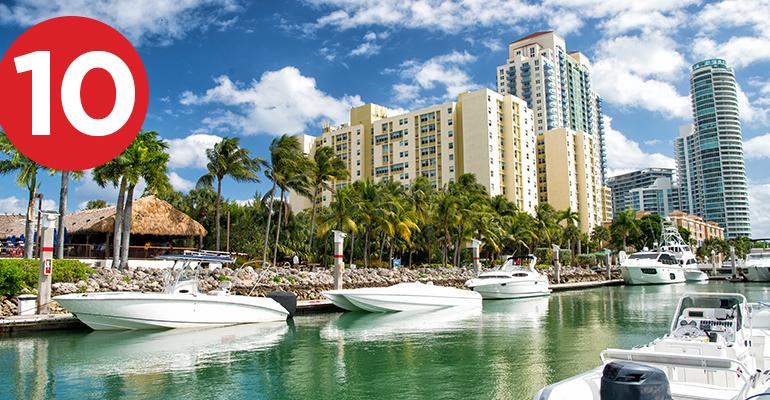 The federal agency that insures mortgages for first-time home buyers is tightening its standards, concerned it is allowing too many risky loans to be extended.

The Federal Housing Administration told lenders this month it would begin flagging more loans as high risk. Those mortgages, many of which are extended to borrowers with low credit scores and high loan payments relative to their incomes, will now go through a more rigorous manual underwriting process, the FHA said.” (Wall St Journal, subscription required)

Downtown Miami has recorded a 37 percent increase in overnight stays over the past five years, according to a recent tourism report released by the Miami Downtown Development Authority. This is due to the region’s growing appeal as a leisure destination, growth of passenger volume at Miami International Airport and PortMiami, as well as the area’s enhanced business activity.

More than six million people visit downtown yearly, making it the second most visited area in Miami-Dade County, following the beaches. This equates to 40 percent of all visitors. In 2018, 57 percent of all visits were for leisure (up 44 percent since 2011), while 17 percent were for business. (Commercial Property Executive)

Phoenix Investors is set to convert a 200,000-square-foot industrial facility into a storage asset in Mount Pleasant, Wis. The firm plans to add about 2,000 self storage units to the property. The facility will be branded and operated by Store Here Self Storage.

Located at 7505 Durand Ave., the storage facility will be near the intersection of freeways 11 and 31, approximately 30 miles from downtown Milwaukee and 24 miles from General Mitchell International Airport. The facility will be surrounded by retail and industrial facilities and will have frontage on both Durand Avenue and Oakes Road. Besides these, the Foxconn development is located within 2 miles of the self storage conversion project. (Commercial Property Executive)

It was a power list that none of the top CEOs and high-profile individuals wanted to be on. On March 12 during a press conference in Boston, federal investigators released the names of 50 prominent people charged with taking part in a nationwide scheme to cheat their way into getting their children into elite colleges.

The fallout for some of the parents and children identified in having taken part in the scam to allegedly bribe coaches, school administrators and SAT and ACT test monitors to gain admission to schools including Yale, Stanford, The University of Southern California (USC), University of California, Los Angeles (UCLA), and Georgetown University has been swift.

According to the National Association of Realtors, existing-home sales in the U.S. rebounded strongly in February 2019, experiencing the largest month-over-month gain since December 2015. Three of the four major U.S. regions saw sales gains, while the Northeast remained unchanged from last month." (World Property Journal)

Large, high-end homes across the Sunbelt are sitting on the market, enduring deep price cuts to sell.

That is a far different picture than 15 years ago, when retirees were rushing to build elaborate, five or six-bedroom houses in warm climates, fueled in part by the easy credit of the real estate boom. Many baby boomers poured millions into these spacious homes, planning to live out their golden years in houses with all the bells and whistles.

Now, many boomers are discovering that these large, high-maintenance houses no longer fit their needs as they grow older, but younger people aren’t buying them." (The Wall St Journal, subscription required)

On the Charleston peninsula, the 42-unit My House on Meeting apartments were picked up for $22.2 million in 2017, three years after selling for $18.45 million.

Investors can make off with a tidy windfall in their short-term holdings, but the higher price paid for the property eventually trickles down to the end user — the tenant." (The Post and Courier)

Opportunity zones are the latest big thing to hit the commercial real estate market, but many questions remain, including details of how deals can be structured, the best strategy for investing and just how much property there is in the zones.

Transaction activity has so far been muted as industry players try to understand the ground rules and raise capital in vehicles that will meet the needs of investors and withstand structural scrutiny. However, one thing is certain: the opportunity is enormous." (GlobeSt.com)

We’ve seen this coming. Anyone who had a shred of interest in digital transformation and took notice of its eventual upheaval and subsequent implementation within first the consumer-driven industries, followed by industrials, then financial services and finally healthcare should have been prepared for the ripple effect technology would create in commercial real estate. Perhaps the old guard felt insulated by the industry’s reluctance to deviate from the status quo, and most sat by as digital technologies kicked our proverbial door down to usher in a new normal." (Forbes)

This is the largest single month of fundraising since CrowdStreet launched five years ago. Sponsors who raised capital on the CrowdStreet marketplace last month included Feldman Equities, KBS, SMARTCAP and Trion Properties. More than 112,000 investors along with 275 commercial real estate operators and developers are on the CrowdStreet platform. (GlobeSt.com)