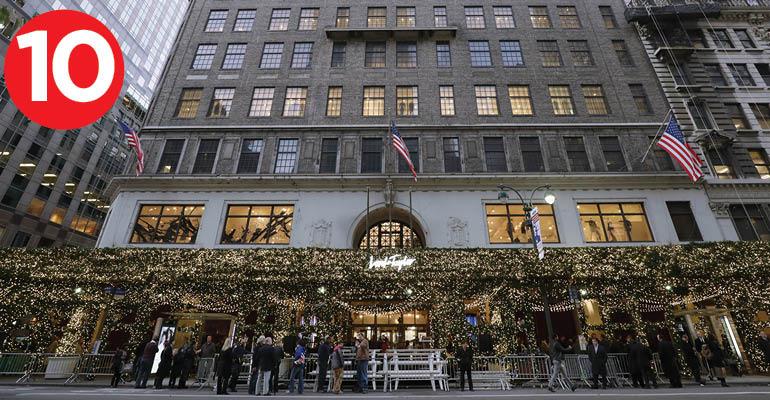 Walmart is looking to buy Humana Inc., a health insurer, reports the Wall Street Journal. President Trump said his infrastructure plan will have to wait until after the midterm elections, according to CNBC. These are among today’s must reads from around the commercial real estate industry.

U.S. Subprime Mortgage Bonds Back in Fashion “Issuance of securities backed by riskier US mortgages roughly doubled in the first quarter from a year earlier, as investors lapped up assets blamed for bringing the global financial system to the brink of collapse a decade ago. Home loans to people with scratches and dents in their credit histories dwindled to almost nothing in the aftermath of the crisis, as litigation-weary lenders retreated to patch up their balance sheets.” (CNBC)

WeWork Rival Leases Classy Lord & Taylor Neighbor “The red terra cotta building next to Lord & Taylor at 15 W. 38 St. that has served as owner Hudson’s Bay offices, has been net-leased by Jay Suites. The Big Apple-based co-working space provider is the third-largest in the city, and its No. 1 rival, WeWork, bought the Lord & Taylor flagship store last fall and is expected to use the building’s upper floors for co-working space.” (New York Post)

Why Would Walmart Want to Buy an Insurer? The Retail Squeeze “First Walmart Inc. dropped “stores” from its legal name. Now the retail giant, faced with shrinking profits and in search of growth, is exploring an acquisition that would push far beyond its big box roots. On Thursday, The Wall Street Journal reported the world’s biggest retailer is in preliminary discussions to buy U.S. health insurer Humana Inc., according to people familiar with the situation.” (Wall Street Journal, subscription required)

Trump Pushes Infrastructure Plan, But Says It Will Likely Have to Wait Until After the Midterms “President Donald Trump said his much-hyped infrastructure plan will likely have to wait until after this year's midterm elections. Ironically, Trump made the remark at an event that was intended to push his infrastructure plan, which would include $200 billion in federal funding meant to encourage $1.5 trillion in overall investment from states, municipalities and private entities.” (CNBC)

Retailers Pounce on Toys ‘R’ Us Real Estate When There’s No Need to Rush “What’s your hurry boys? There’s plenty more where that came from. The headlines surfacing the past day or two that several big national retailers are licking their lips over upcoming Toys "R" Us vacant store locations seems more like a carnival huckster’s pitch than actual real estate news. The seeming feeding frenzy would suggest that the retail landscape is packed tightly with tenants and that any empty space is a rarity to be gobbled up at a fast and furious pace.” (Forbes)

LVMH Pays High Price for Rodeo Drive Property “A unit of LVMH Moët Hennessy Louis Vuitton paid $110 million, or around $17,750 a square foot, for a store on Los Angeles’s ritzy Rodeo Drive, in a sign that values of property in the country’s most fashionable shopping districts haven’t succumbed to the malaise hitting retail real estate. The seller of the empty, 6,200-square-foot, single-story building at 456 N. Rodeo Dr. was Sterling Organization, a real-estate private-equity firm based in Palm Beach, Fla.” (Wall Street Journal, subscription required)

Why It’s Time to Add Commercial Real Estate to Your Investment Portfolio “Savvy investors, including high-net-worth individuals, family offices and institutional investors, are now looking at all the opportunities within the CRE industry to achieve attractive, risk-adjusted returns. Compared to the increasing volatility of the equities market and the near-zero returns from bank deposits, CRE offers an attractive middle option that efficiently balances risk and return while providing cash-flow to a portfolio.” (Forbes)

Starbucks Opened a Location in Yosemite. Not Everyone Is Excited “In most U.S. cities, a Starbucks is never too far away, and now even in the middle of a redwood forest there’s a tall latte nearby. Starbucks opened a store in California’s Yosemite National Park on March 16, the company’s first location in a National Park. Not everyone is thrilled. More than 25,000 people signed a petition calling to block the addition of a Starbucks to the park.” (Fortune)

City Will Not Collect Personal Data of Undocumented Workers Under New Safety Law “Department of Buildings Commissioner Rick Chandler said Wednesday that the city will neither collect nor retain the personal information of undocumented construction workers who will be required to earn safety training certification under a new law. Chandler’s agency is busy hashing out how to implement the new construction safety bill that was crammed through the City Council in September. The law requires all construction workers to complete at least 40 hours of safety instruction by 2020.” (Crain’s New York Business)

How Are Driverless Cars Reshaping CRE? “Autonomous vehicles are steadily becoming a more commonplace, but the question that many people ask is how will this trend change our cities and, in particular, the commercial real estate market? Joe Derhake, CEO of Partner Engineering and Science, spoke with Multi-Housing News on how parking demand will be affected by autonomous vehicles, especially in the office sector, and what is the overall impact of driverless cars on CRE.” (Commercial Property Executive)