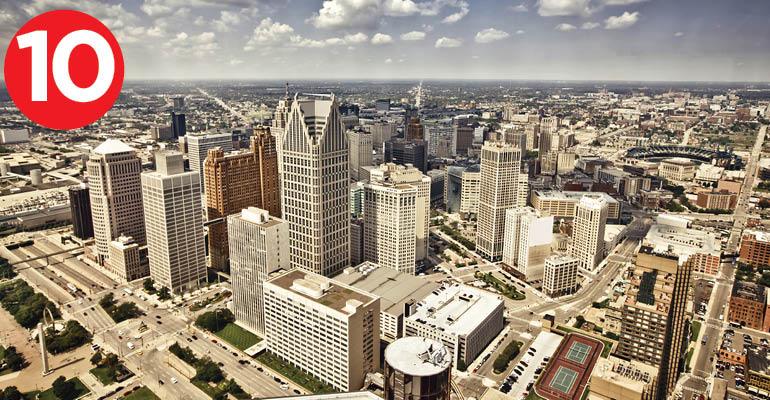 Federal Reserve Vice Chairman Stanley Fischer has resigned, reports CNBC. KBS Realty Advisors is planning an IPO in Singapore, according to the Wall Street Journal. These are among today’s must reads from around the commercial real estate industry.

Sale of Brooklyn Housing Complex Would Benefit Trump “The longtime owners of Starrett City, the sprawling Brooklyn housing complex overlooking Jamaica Bay, are selling the development for more than $850 million, and among those who stand to benefit is President Trump, a partial owner. Starrett City is the largest federally subsidized housing development in the country, and the sale will require the approval of the federal Department of Housing and Urban Development and state housing officials, raising potential conflicts of interest for Mr. Trump and his family.” (The New York Times)

Vice Chair Stanley Fischer Stepping Down from Fed, Citing ‘Personal Reasons’ “The resignation of Fischer, whose term was set to expire on June 12, 2018, creates yet another opening at a critical time for the Fed. The central bank is set to begin unwinding the $4.5 trillion balance sheet of bonds it built up during its economic stimulus efforts and is trying to normalize interest rates after keeping its benchmark rate near zero for seven years.” (CNBC)

American Real Estate Firm Plans $500 Million Singapore IPO “KBS Realty Advisors LLC, an American real-estate investment firm, is planning to raise about $500 million via a Singapore initial public offering of some of its U.S. office assets, according to people familiar with the matter. The Newport Beach, Calif.-based company is in talks with the asset-management arm of Singapore conglomerate Keppel Corp. to form a joint venture that they plan to list.”(Wall Street Journal, subscription required)

Amazon Announced Plan for Huge New North America Offices “Amazon said on Thursday that it was searching for a second headquarters in North America, a huge new development that would cost as much as $5 billion to build and run, and would house as many as 50,000 employees. The announcement is likely to set off jockeying among several major cities, and is the latest step in the rapid expansion for the online retail giant. It recently completed its biggest acquisition, of the high-end grocery chain Whole Foods, and has embarked on a major hiring drive, adding tens of thousands of new employees.” (The New York Times)

Gap Inc. Shifting Focus—and Store Footprint—to Two Brands “Gap Inc. is shifting its emphasis to its two best-performing brands — and realigning its store portfolio to reflect its new emphasis. The nation's largest specialty apparel retailer had decided that its future growth lies primarily in its lower-priced Old Navy and athleisure-positioned Athleta brands. As a result, it expects to close about 200 underperforming Gap and Banana Republic stores over the next three years. Banana Republic has been a particularly dismal spot for the retailer, with 10 straight quarters of same-store sales declines.” (Chain Store Age)

Hurricane Irma Could Hit Mar-a-Lago and These Other Trump Properties “Four Trump properties, including his preferred retreat Mar-a-Lago, are in the possible path of the storm, which could cost Trump tens, perhaps hundreds of millions of dollars. The property at most immediate risk is "Le Chateau des Palmiers," Trump's Caribbean Mansion. The 11-bedroom gated estate, owned through a trust to avoid conflicts during his presidency, is located on St. Martin, which is currently being devastated by Irma.” (Fortune)

U.S. Home Builders Ask Trump for Comprehensive Immigration Reform “Granger MacDonald, chairman of the National Association of Home Builders (NAHB) and a home builder and developer from Kerrville, Texas, issued the following statement after the Trump administration announced this week it would wind down the Deferred Action for Childhood Arrivals (DACA) program, which has allowed young people known as "Dreamers" who were brought to this country illegally as children to live and work: ‘President Trump's call to Congress to find a permanent legislative solution to protect the 'Dreamers' underscores the urgent need for lawmakers to pass comprehensive immigration reform.’” (World Property Journal)

How JPMorgan Chase Is Fueling Detroit Revival “The bank’s effort, called Invested in Detroit, is a ­neighborhood-by-neighborhood campaign to revive local real estate, launch small businesses, and train residents for in-demand jobs—all at the same time, as quickly as possible. ‘If you don’t have jobs, you don’t have housing,’ ­Dimon tells Fortune in an interview at JPMorgan Chase’s New York headquarters. ‘If you don’t have housing, people can’t get to their jobs. If people don’t have skills, people can’t buy homes. You’ve got to make progress on all these fronts.’” (Fortune)

Amazon Confirms It’s Opening Giant Warehouse in Staten Island “Amazon has finally admitted that it’s opening its first major warehouse in New York City. Confirming an exclusive report in The Post, the Seattle-based web giant said on Wednesday that it’s moving into a $100 million, 855,000-square-foot facility on the west shore of Staten Island. New York was the last big US market in which Amazon didn’t have a fulfillment center, partly because of squabbles with state officials over taxes and because of the high cost of real estate in the city.” (New York Post)

Wanda Sues Over ‘False’ Reports on Chairman Wang Jianlin “Dalian Wanda Group, the property and entertainment giant controlled by billionaire Wang Jianlin, has filed defamation suits against at least 10 Chinese social media accounts that published reports the company says sent its shares and bonds tumbling. According to a copy of one lawsuit reviewed by The Wall Street Journal, Wanda is taking issue with claims that Mr. Wang was detained by police at Tianjin’s airport last month.” (Wall Street Journal, subscription required)