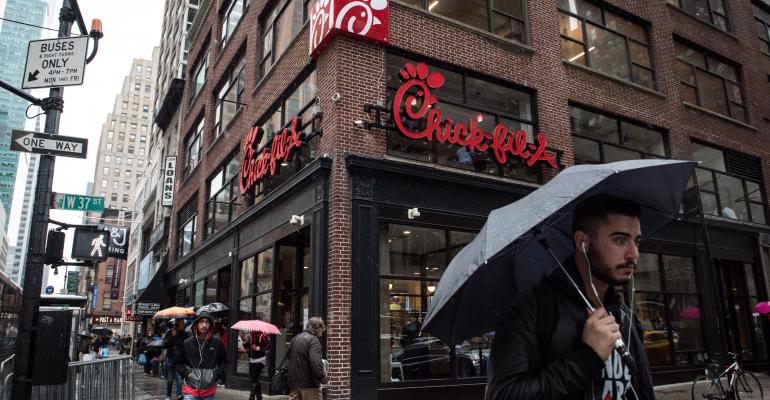 Traffic for the restaurant industry was down 1.1 percent in July, the 29th straight month of declines, according to MillerPulse data.

(Bloomberg)—Home cooking would be making a comeback if it ever really went away.

Restaurants are getting dinged by the convenience of Netflix, the advent of pre-made meals, the spread of online grocery delivery, plus crushing student debt and a focus on healthy eating. Eighty-two percent of American meals are prepared at home -- more than were cooked 10 years ago, according to researcher NPD Group Inc. The latest peak in restaurant-going was in 2000, when the average American dined out 216 times a year. That figure fell to 185 for the year ended in February, NPD said.

Don’t be fooled by reports of rising U.S. restaurant sales at big chains like McDonald’s Corp. Increases have been driven by price hikes, not more customers. Traffic for the industry was down 1.1 percent in July, the 29th straight month of declines, according to MillerPulse data.

“It’s counterintuitive because you see a lot of things in the press about restaurant sales increasing,” said David Portalatin, a food-industry adviser at NPD. “America does still cook at home.”

The shift is weighing on the fast-food industry. Eateries already are struggling with higher labor and rent costs that they’re passing along to customers, which in turn makes home cooking more economical. McDonald’s, Jack in the Box Inc., Shake Shack Inc. and Wendy’s Co. have all raised prices in the past year.

“For a lot of consumers, it’s expensive to eat out,” said Bob Goldin, partner at foodservice consultant Pentallect. “You can save a lot of money at the grocery.”

While going out to eat has always been pricier, the gap between restaurant eating and home cooking is widening, making supermarkets look even cheaper. That’s an especially appealing prospect for budget-conscious millennials, who are starting families.

Claire Tinley, 32, a Chicago nursing student who has two young children, said she used to eat out with her husband a couple times a week, but has cut back to once every two weeks.

“Having kids impacted my dining out,” Tinley said. She was at a neighborhood market grabbing cilantro, ginger and onions to prepare chana masala, an Indian chickpea stew, at home. “We’re paying for childcare, we’re paying for school. The restaurant budget is not there, and it’s cheaper to eat at home.”

For McDonald’s, the world’s biggest food chain, fewer U.S. customers offset increasing numbers in the rest of the world, resulting in a second-quarter global guest-count drop of 0.3 percent, the burger seller said in July.

Meal kits, delivery and new appliances like the Instapot, which prepares a variety of food, also make it easier to stay in. Discount grocery chain Aldi recently said it’s introducing more “meal to go” options, like a seven-grain salad with hummus and crackers for $3.49.

Meal-kit companies have had mixed success. The field is led by HelloFresh SE and Blue Apron Holdings Inc., the latter of which has struggled to hit its stride since an initial public offering last year. In May, Kroger Co. bought Home Chef, and Walmart Inc. just teamed up with Gobble to sell 15-minute dinner packs.

“Ten years ago, you had to chop your own onions,” said Bloomberg Intelligence analyst Jennifer Bartashus. “Today, you can go into any grocery store and most of them sell pre-chopped fruits and vegetables. If the biggest driver for eating out was that it’s simply more convenient, that problem is now being solved by a variety of different products and services.”

Chick-fil-A is selling chicken meal packages at 150 of its restaurants in Atlanta for the first time. Customers can grab one at the drive-thru for $15.89 and make their own chicken parmesan or enchiladas in 30 minutes.

Chick-fil-A’s test will last three months and measure if the packages hurt sales of the chain’s other items, said Michael Patrick, who’s leading the project. Patrick predicted the kits would boost sales for the closely held company, and give diners another easy dining option for busy evenings.

“There’s an emotional connection to cooking,” Patrick said in an interview. “There’s a pride, and a sense of ‘I actually did something’ and ‘I get to serve something to someone else’ that you don’t get with eating out.”