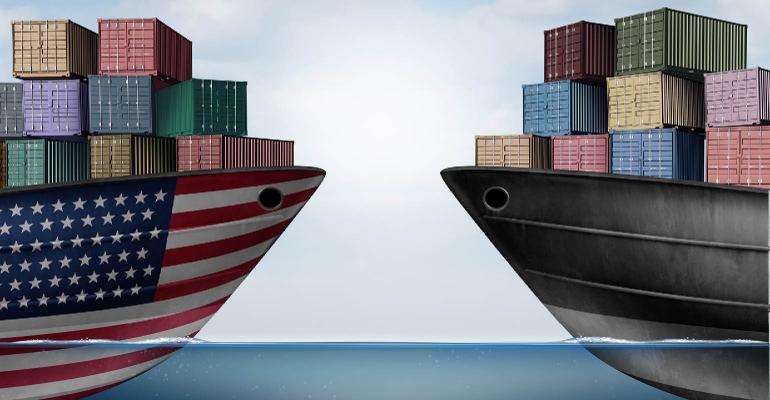 The EU said it would take immediate steps to retaliate, while Mexico vowed to impose duties on everything from U.S. flat steel to cheese.

(Bloomberg)—America’s closest allies plan to slap billions of dollars in tit-for-tat tariffs on U.S. goods after the Trump administration announced it’s imposing steel and aluminum duties on them.

The reaction was swift after Commerce Secretary Wilbur Ross announced the U.S. on Friday will levy new metals duties on imports from the European Union, Mexico and Canada on national security grounds, ending their temporary exemptions.

The EU said it would take immediate steps to retaliate, while Mexico vowed to impose duties on everything from U.S. flat steel to cheese. Canada’s government announced it will impose tariffs on as much as C$16.6 billion ($12.8 billion) of U.S. steel, aluminum and other products from July 1.

In public statements in capitals from Ottawa and Brussels to Washington and Mexico City, politicians expressed their frustration and puzzlement at the U.S. move.

House Speaker Paul Ryan attacked the decision in a statement, saying "today’s action targets America’s allies when we should be working with them to address the unfair trading practices of countries like China."

Canadian Prime Minister Justin Trudeau said the tariffs are an affront to the “long-standing security partnership” and to the Canadian and American soldiers who have fought and died alongside one another.

“We have to believe that at some point common sense will prevail, but we see no sign of that in this action today by the U.S. administration,” Trudeau said at a press conference.

European Commission President Jean-Claude Juncker, speaking in Brussels, characterized it as “a bad day for world trade,” adding “it’s totally unacceptable that a country is imposing unilateral measures when it comes to world trade.”

Worries are mounting about the prospect of a trade war as the Trump administration also considers tariffs on U.S. auto imports -- which could hit top suppliers from Mexico, Canada, Japan and Germany -- and plans to levy duties on $50 billion in Chinese goods.

The EU and Japan issued a joint statement condemning the metals tariffs and saying the possible duties on cars “would cause serious turmoil in the global market and could lead to the demise of the multilateral trading system based on WTO rules,” referring to the World Trade Organization.

The rising trade tensions have come up at the meeting of Group of Seven finance ministers and central bank governors in Canada. Bank of Japan Governor Haruhiko Kuroda warned that the U.S. would also feel the effects of its actions.

Growing trade tensions have clouded a benign outlook for the global economy, which is on track to grow at its fastest pace since 2011 this year and next, according to the International Monetary Fund.

Ross said there wasn’t enough progress in discussions with the EU over trade concessions and Canada and Mexico on rewriting the North American Free Trade Agreement to give them permanent exemptions from the metals tariffs. The EU, Canada and Mexico together account for about 40 percent of U.S. steel imports.

The commerce secretary said he’s looking forward to “continued negotiations” with Canada, Mexico and the EU to resolve their issues. There’s potential “flexibility” in the future because the president has the power to increase or cut tariffs, remove them, or enact quotas, he said.

“We continue to be quite willing and eager to have further discussions with all of those parties,” Ross told reporters on Thursday. “We are awaiting their reaction.”

Stocks in the U.S. fell as the administration ignored pleas from business lobbying groups including the U.S. Chamber of Commerce to forgo tariffs. The shares of major American steel producers, which have supported the tariffs, rose on Thursday’s news.

The EU has indicated it could target $3.3 billion in American products from Harley-Davidson Inc. motorcycles to Levi Strauss & Co.’s jeans as well as bourbon. Both the EU and Canada said they intend to proceed with a case at the World Trade Organization against the U.S. import restrictions.

Trudeau said the U.S. measures are “punitive” and “unacceptable.”

“These tariffs will harm industry and workers on both sides of the Canada-U.S. border, disrupting linked supply chains that have made North American steel and aluminum more competitive around the world,” the prime minister said.

The steel and aluminum levies and auto-import probe could play well with Trump voters in Rust Belt states in the lead-up to congressional midterms in November. But the tariffs aren’t popular among pro-trade lawmakers in Trump’s own Republican Party.

“Tariffs on steel and aluminum imports are a tax hike on Americans and will have damaging consequences for consumers, manufacturers and workers,” said Senator Orrin Hatch of Utah, chairman of the Finance Committee, which oversees trade in the upper chamber.

In imposing the tariffs, Trump invoked a seldom-used section of a 1960s trade law that allows him to erect trade barriers when imports imperil national security. Trump in March imposed 25 percent duties on imported steel and 10 percent on aluminum, but he gave temporary reprieve to a handful of allies for further talks to take place.

The action was mainly targeted at China over accusations of flooding the global market with cut-rate metals and dragging down prices. The Trump administration has said a global tariff is necessary because China is shipping its steel through other nations.

The White House said in a statement Thursday that those tariffs have already had “major, positive effects” on steel and aluminum workers.

Ross played down the potential negative impact on the U.S. economy from the duties. “For the economy overall, it’s just a very small fraction of 1 percent,” he said in an interview on CNBC.

Republican Senator Ben Sasse of Nebraska drew a parallel between Trump’s tariffs and trade protectionism during the Great Depression.

“This is dumb,” Sasse said in an emailed statement. “Europe, Canada, and Mexico are not China, and you don’t treat allies the same way you treat opponents. We’ve been down this road before -- blanket protectionism is a big part of why America had a Great Depression. Make America Great Again shouldn’t mean Make America 1929 Again.”