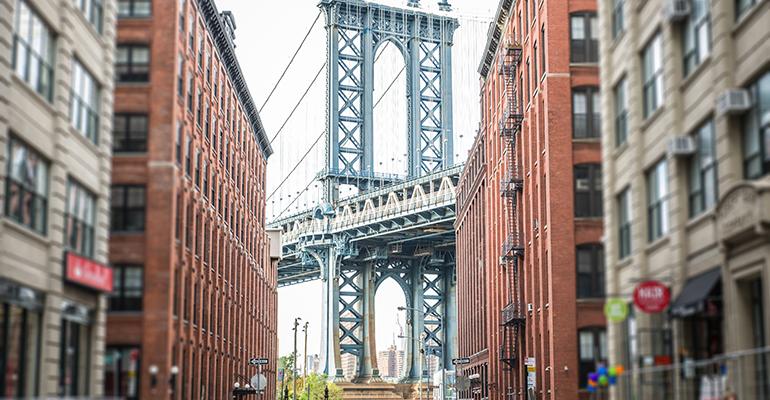 The borough’s image as a hip hub for millennials could give it a leg up as the e-commerce giant hunts for the perfect locale for its second U.S. headquarters.

The borough’s image as a hip hub for millennials could give it a leg up as the e-commerce giant hunts for the perfect locale for its second U.S. headquarters, according to Ofer Cohen, president of TerraCRG, a Brooklyn-based commercial-property brokerage. Brooklyn is in the midst of a building boom, with about 7 million square feet (650,000 square meters) of offices planned, as developers seek to leverage the area’s popularity with young people who have migrated across the East River to escape Manhattan’s sky-high rents.

“Everybody got excited in the Brooklyn real estate community” when Amazon announced its intentions, Cohen said. “Brooklyn has been waiting for a technology company to say, ‘I want to make Brooklyn my home.’”

Amazon, aiming to build a corporate compound that will rival its original campus in Seattle, has solicited proposals for the project, which will cost more than $5 billion and create 50,000 jobs over the next 15 to 17 years. New York City entered the fray last week, touting its big-city living, diverse workforce and extensive university system as attributes that officials hope will help overcome the drawback of being one of the country’s costliest housing markets.

Developers across New York are working to assemble their pitches, according to Seth Pinsky, an executive vice president at RXR Realty.

“This is a really exciting opportunity and I certainly hope, as a New Yorker, that Amazon looks very seriously at the city,” he said. “No landlord or developer is going to ignore a request like the one Amazon has put out.”

Brooklyn’s boosters say the large amount of space under development may entice Amazon to put down stakes in the borough, which has so far come up short in its effort to attract big-name companies. As of May, not one non-government employer had signed a lease for more than 100,000 square feet, a typical minimum size for a building’s anchor tenant, since mid-2015.

There are several sites in Brooklyn that could potentially meet Amazon’s need for 500,000 square feet for the first phase, and as much as 8 million square feet over the next 10 years, according to Cohen. Possibilities include Industry City, a complex on the Sunset Park waterfront being redeveloped as a hub for artists, tech startups and manufacturers; the nearby Brooklyn Army Terminal; and undeveloped land between the Barclays Center arena and the Fulton Mall, he said.

At Industry City, Atlanta-based Jamestown and its partners have become landlords to 450 businesses, up from 100 since acquiring the neglected industrial plot in 2013, according to Andrew Kimball, chief executive officer of Industry City. The 35-acre (14-hectare) site is well-positioned to meet Amazon’s need for space, especially if neighboring sites along the waterfront were to be integrated in a unified project, he said.

One of the biggest draws for businesses relocating from Manhattan and other areas is that Brooklyn is where the young talent wants to live, according to Kimball. In many cases, companies discover that many of their employees already reside there, he said.

In Williamsburg, Rubenstein Partners’ Jeremiah Kane is making the case for a speculative office building his firm is co-developing. The project, 25 Kent, will have 500,000 square feet -- exactly what Amazon says it needs for the first phase of its new headquarters. Banding with other local developers, he’s suggesting to the city that Brooklyn’s western waterfront can accommodate the rest of the tech giant’s expansion plans.

“We started looking at Amazon’s requirements and started looking at what type of campus they built for themselves in Seattle, and the parallels with Brooklyn are really uncanny,” including its walkable streets, vibrant urban environment and plentiful restaurants, he said.

While New York has an extensive mass-transit network -- cited by Amazon as one of its preferences -- the city’s subways are already overcrowded and in need of repairs. The L train, with direct access to Williamsburg, is scheduled to shut down for 15 months starting in April 2019, about when Amazon would like to start settling into its new locale.

New York City can probably find enough space to make it competitive in the bidding, according to Albina Reydman, an analyst at CoStar Group Inc. for the Brooklyn, Queens and Long Island markets. But there’s one thing that can’t be changed: affordability.

“At the end of the day, the deal breaker -- if there is one -- would be cost of living. That’s something that you can’t really get around,” she said.

Other cities that have announced their interest in Amazon, such as Chicago or Denver, have a lot of the cultural benefits that draw people to New York, and housing costs that are far cheaper. Average monthly apartment rents are $2,400 in Chicago and $1,600 in Denver, according to Reydman. That compares with $3,800 in downtown Brooklyn and $4,300 in Manhattan’s Chelsea neighborhood, she said.