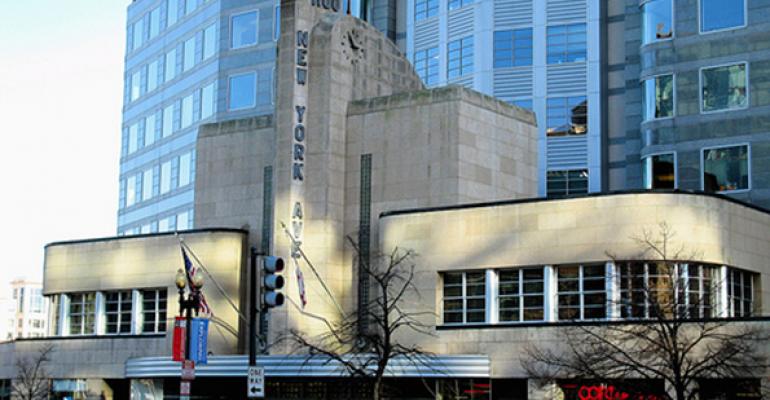 Demand for Office Space Heats Up as FIRE Sectors Recover

Professional services that have traditionally led demand for office space, including finance, insurance and real estate, have finally made a comeback after a slump following the recession. Office market experts hope that the sectors, collectively referred to as FIRE, will now join with the tech and energy industries to heat up office demand in primary cities in 2015.

New demand has pushed office vacancy down to about 13.5 percent, according to a recent report by Colliers International. In already tight markets, vacancy is decreasing even further: Pittsburgh vacancy is now at 7.7 percent, New York Midtown South is at 8.4 percent and San Francisco at 7.5 percent. A few secondary and even tertiary markets are also seeing improved vacancy numbers, including Charlotte, N.C. (8.7 percent), Portland, Ore. (9 percent) and Omaha, Neb. (6.9 percent).

Pete Culliney, director of research at Colliers, says office markets that cater to the FIRE sectors hit nearly 7 million sq. ft. of absorption in the third quarter, almost matching the 8 million sq. ft. of absorption in markets that primarily service the intellectual capital, energy and education sectors. “It does seem we’re fitting six years of recovery into eight or nine years; it’s taking longer to get where we expected to be,” Culliney says. “But it’s decidedly still positive. The country is on track this year to create the most jobs in 15 years, office transaction volume is high and the demand is playing out through most of the product types and geographic markets.”

According to Colliers, U.S. employers added more than two million new jobs this year, with office-related jobs adding 1.3 positions for every one job lost during the recession. An HIS Global Insight report predicts that 2015 will see even more job growth, with about 2.6 million new positions.

The demand has drawn tremendous attention to the top markets in the U.S., by both domestic and foreign investors, according to the Colliers report. Cap rates in primary markets, such as New York City and San Francisco, have been in the 3 percent to 4 percent range. The average cap rate in the six major U.S. metros (Boston, Chicago, Washington, D.C., Los Angeles, New York City and San Francisco) decreased to 4.1 percent in the third quarter, the lowest rate on record.

Yet the typical end-of-year buying frenzy is in full force. Culliney says many REITs and private firms are capitalizing on strong investor demand by disposing of non-core assets and/or starting developments in hot markets. Prudential Real Estate Investors has reportedly agreed to buy 55 E. Monroe St. in Chicago, in the East Loop, for $370 million, in a city that’s already seen three other deals this year at more than $370 million.

“These investors are not expecting a high yield, they just believe, especially the foreign investors, that the U.S. office market is very stable. I think the foreign investors see the instability of their own markets and want to park it here, the most stable and developed nation in the world. For the most part they’re happy to make single-digit yield because they believe in the long-term appreciation here.”

The buying has spread into the secondary and tertiary office markets as well. Griffin Partners and Clarion Partners recently announced the $100 million purchase of the 28-story Bank of America Plaza in San Antonio, the tallest building in that city’s downtown. Five Mile Capital Partners LLC is reportedly purchasing the 32-story 100 Peachtree tower in Atlanta from America’s Capital Partners, and Cousins Properties is selling the 40-story 777 Main in Fort Worth, Texas for an undisclosed amount.

Culliney says even the middle of the country, an area you don’t think of as being loaded with office cities, is seeing a lot of job growth.

“This is probably driven by the ability today through the Internet to perform office work anywhere. If the top-tier market leases and price of employees is too high in top markets, it can be cheaper just to go to a place like Ohama,” he says. 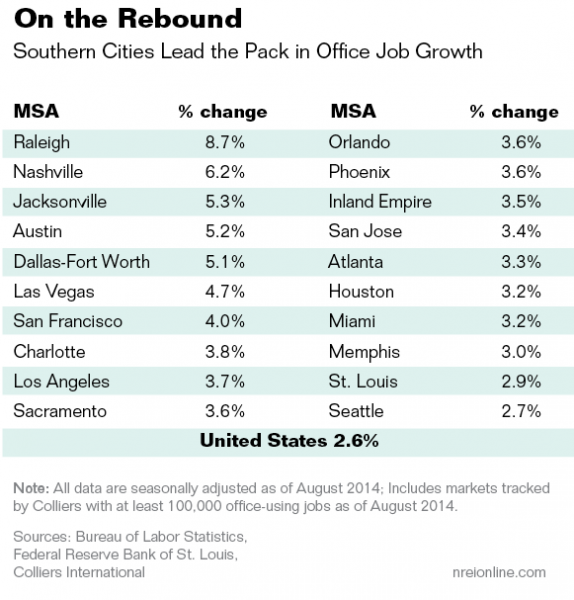