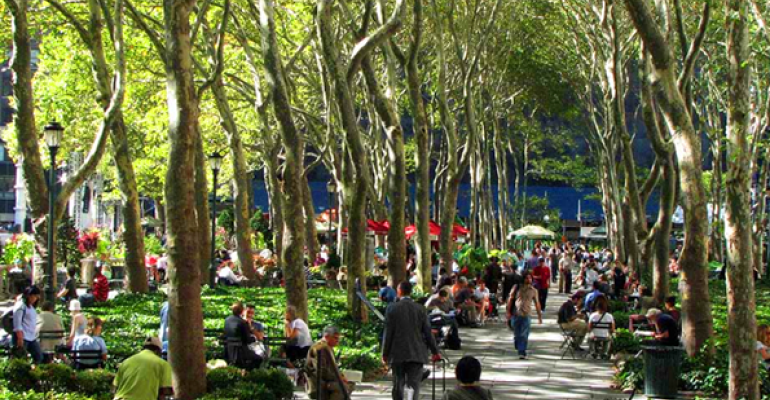 And even while government funding for public parks has decreased over the past several decades, parks conservancies and business improvement districts have stepped up to the plate, said Peter Harnik, director of the San Francisco–based Trust for Public Land’s Center for City Park Excellence.

“When it comes to parks, America is in a golden age,” Harnik said. “This is partly due to city governments around the country and partly due to the private sector, on the part of those of us who bemoaned the state of city parks for the past several decades.”

According to the Trust for Public Land’s annual survey of 100 U.S. parks, Harnik noted, cities are being “brought back from the brink,” in some cases, or pushing forward economically due to parks development, including Chicago, Atlanta, Seattle and Denver. And cities with long-established and well maintained parks are thriving. For instance, in 2013, San Francisco saw $122 million in property sales surrounding Golden Gate Park and more than $400 million in tax benefits from parks tourism.

Now other struggling cities like Newark, N.J., whose new $444 million Prudential Center tower has been the impetus for the redevelopment of the surrounding Military Park, which opened last June. Newark’s park revitalization, said Harnik, has brought other development to the area, including the adaptive reuse of the former Hahne’s Department Store, which will feature Whole Foods as its anchor tenant. “Newark is the next Brooklyn,” he said.

Daniel Biederman, CEO of New York City –based Biederman Redevelopment Ventures and co-founder of Grand Central Partnership, 34th Street Partnership and Bryant Park Corp., said the biggest hurdle in revitalizing parks is convincing property owners that it is “better to invest in the park across the street than in a fancy lobby in their own building.” But when accomplished, the payoff is substantial.

New York City’s Bryant Park, Biederman said, was a “trash can for the city” in the 1970s and ’80s. But investors like Brookfield, owner of the Grace Building (1114 Ave. of the Americas) across the street, invested $3 million in the park, helping to clear it of drugs and crime and institute a “low-design, high-activity program.” Today the park boasts a winter marketplace, summertime film series, singles bars, and the nation’s largest mass square dance and yoga programs.

As a result, the Grace Building’s annual rent roll increased by $19.5 million and its overall building value rose to $390 million at a 5 percent cap rate. “We’re not comfortable taking money from the government or private philanthropies,” Biederman said. “We wrote off government funding completely in 1997. Building owners should not spend money on fancy lobbies. They should spend it on parks.”

Biederman’s redevelopment of Klyde Warren Park in Dallas was the recipient of the 2014 ULI Open Space Award. The project involved putting a deck over the freeway to connect the neighborhoods surrounding the park.

“It was a lot of hard work, stupidity and passion,” Biederman said. The project took 5.2 acres off the tax rolls of the City of Dallas, but also “became a melting pot for all Dallasites. People who’ve never experienced the arts are now experiencing them in a big way.”

Klyde Warren is the most heavily programmed park Dallas has ever seen, he said. As a result, the number of residences in downtown Dallas has increased from 150 a decade ago to 8,000; land has risen from $50 per sq. ft. to $180 per sq. ft. and two adjacent buildings—2100 2000 McKinney—increaed in value by 47 percent and 38 percent, respectively.