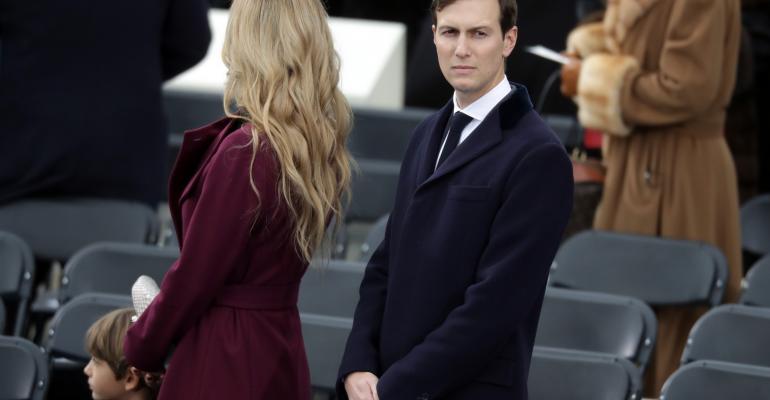 The fees, at 666 Fifth Avenue, kicked in last month and escalate with each payment until the loan is repaid, a 2011 refinancing agreement shows.

(Bloomberg)—The Manhattan tower co-owned by the family of Jared Kushner, President Donald Trump’s son-in-law, has been losing money for three years and faces increasing loan fees in 2017, which may explain why the family has been negotiating with Chinese insurance behemoth Anbang on new financing.

The fees, at 666 Fifth Avenue, kicked in last month and escalate with each payment until the loan is repaid, a 2011 refinancing agreement shows. December brings another hurdle: Interest paid on the bulk of about $1.1 billion of loans jumps to 6.35 percent, more than double what it was after the debt was refinanced in 2011.

And as the city’s biggest office construction boom in a quarter century creates a glut of supply, the property’s occupancy rates are falling. Seventy percent of the building was filled as of September, filings by LNR Partners, the loan managers, show. This is well below 91 percent for the New York metro area reported at year’s end by Reis, the market-data firm, said Bloomberg Intelligence analyst Jeffrey Langbaum.

Details of talks with Anbang Insurance Group Co. were first reported by Bloomberg last week. Some ethicists expressed concern about whether the Chinese company was seeking improper influence in the White House. Anbang issued a statement saying it has no investment in the building. The proposed deal would require additional investors and it isn’t clear if any have joined. Kushner Cos. said through a spokesman that it remains "in advanced, ongoing discussions around 666 5th Avenue." Queries to several Anbang spokesmen about the state of the negotiations weren’t answered.

The proposed $4 billion deal with Anbang Insurance Co. would refinance the debt, while forgiving the majority of a second tier of loans known as a "hope note," where much of the interest on the debt has accrued, according to the refinancing agreement. For Kushner Cos., plans for ultra-luxury condominiums at 666 Fifth Avenue could be a means to pay off its loans. In 2015, after debt payments, the property lost $10 million. It was on track to lose more than that in 2016.

The debt owed on the building was scheduled to be paid off last month prior to a refinancing that granted a two-year extension. During the extension, the Kushners pay monthly exit fees that rise with each installment.

A spokesman for Jared Kushner says he sold his stake in 666 Fifth Avenue to family members in order to join the White House staff and comply with conflict-of-interest laws.

The original purchase in early 2007 was his grand entry into Manhattan -- taking the company his father built on suburban garden apartments into a future marked by more prestigious urban properties. Costing a then-record-setting $1.8 billion in early 2007, the building would later become a symbol for a period of irrational exuberance in U.S. real estate, where a belief in forever-climbing rents sent values soaring. The deal was financed with a $1.215 billion loan from Barclays Capital, which was divided and sold in commercial-mortgage bond offerings, data compiled by Bloomberg show.

In New York, the enthusiasm was matched only by Macklowe Properties’ $7 billion purchase of office buildings across Manhattan and the $5.4 billion sale of Stuyvesant Town and Peter Cooper Village on the East Side to Tishman Speyer and BlackRock Realty.

"We are very bullish on New York real estate, and we are confident that 666 Fifth has great upside potential,” Kushner said at the time. “We identified a premier building with the highest quality office configuration and one of the best retail boxes in the world.”

Kushner’s optimism was shared by his lenders. Mortgages were granted under assumptions that now look rosy: The building would throw off $119 million in net operating income and would be 98 percent occupied, underwriters expected.

That buoyancy faded in the 2008 financial crisis, and a debt hangover has lingered.

By 2010, the building was 78 percent occupied and was earning little more than one-third of what its lenders had anticipated. After debt payments, it had a $35 million loss. The next year brought a reprieve: Steven Roth’s Vornado Realty Trust swooped in to become a 49.5 percent equity partner in the tower, and the debt was refinanced -- providing temporarily lower interest rates and segmenting a portion of the loans into the “hope note,” with an understanding that it may never be repaid. The note is now held widely by investors in bundles of debt securities.

For a while, the arrangement worked. Debt payments dropped in 2012 and the property made money. But the break was short-lived. Citibank, whose logo adorned the building and which occupied one-fourth of its 1.45 million square feet of office space, was leaving. Still, Kushner Cos.’ new partner took the exit in stride, noting that Citi owed them rent until its lease was up in 2014 -- plenty of time to find new tenants for the 41-story tower.

“When we came into this asset some two years ago, it had been off the radar for years, because of its broken capital structure,” David Greenbaum, a Vornado president for New York, said in a call with investors in November 2013. “We came in and recapitalized this building and have since successfully leased 200,000 square feet, and are in current negotiations for an additional 50,000 feet. Taking account of the Citibank space which will be coming back to us in August of next year, we have about 330,000 square feet to go.”

Kushner Cos.’ current situation -- with rising debt costs that eclipse 666 Fifth’s income -- now looks familiar, and it’s once again casting about for a savior. A spokesman for Vornado declined to comment.