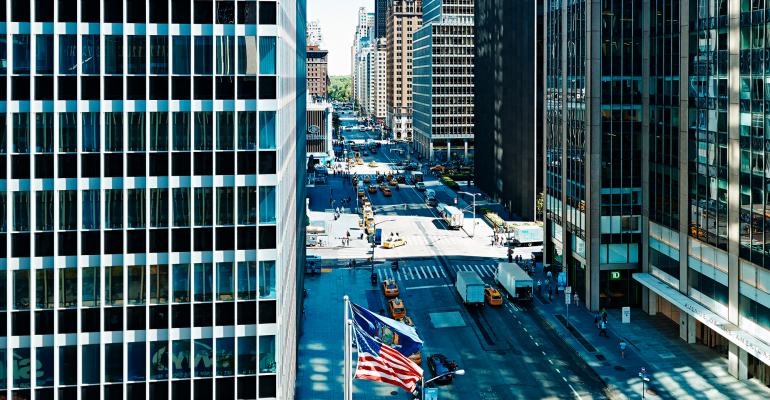 The number of workers who went to the office in 10 of the largest U.S. business districts fell to 26.4 percent from pre-pandemic levels in the week ended Nov. 4.

(Bloomberg) -- It rises 1,401 feet over midtown Manhattan like a monument to another time -- a shiny new skyscraper commissioned long before the world had ever heard of Covid-19.

Donning masks, the developers cut the ribbon at One Vanderbilt in September, six months into the pandemic that has emptied offices across New York. Now what once seemed like a grand play by its developer, SL Green Realty Corp., stands in stark contrast to the growing angst inside the city’s office market.

Even with roughly 70% of One Vanderbilt leased -- most of that before the coronavirus struck -- shares of SL Green, the biggest office landlord in New York, are down about 30% since March. To some, that decline merely hints at the pain yet to come for the entire industry, its investors and its lenders given the head-snapping drop in demand and lease signings across the city.

The 427-meter One Vanderbilt is but one piece of a decade-long building boom that’s contributed to a heavily supplied office market even before Covid-19 hit. Eight months into the pandemic, uncertainty about companies’ commitments to having lots of employees in physical offices has sent shares of New York office landlords tumbling this year, some losing more than half their value.

Then, on Nov. 9, the market may have offered a glimpse of a possible post-pandemic future in which employees returned to offices. After Pfizer Inc. announced its Covid-19 vaccine stopped 90% of cases in a study, shares of office landlords Vornado Realty Trust, SL Green and Empire State Realty Trust Inc. surged more than 35%. All three rose today, led by Empire State at 9% and Vornado at 6%.

The number of workers who went to the office in 10 of the largest U.S. business districts fell to 26.4% from pre-pandemic levels in the week ended Nov. 4, according to data from Kastle Systems. The metro area encompassing New York and Newark and Jersey City, New Jersey, had the lowest figure, at 14.3%.

More than 13% of the 454 million square feet of office space in Manhattan was available for rent in the third quarter, with a big increase in new sublease space, which saw the biggest quarterly gain since the global financial crisis, according to brokerage Savills Plc.

“The sublease inventory is growing and this is going to create a definite market correction and slow down the velocity of leasing,” said Peter Riguardi, chairman and president of the New York, New Jersey and Connecticut region at Jones Lang LaSalle. “It’s very challenging.”

Offices, which tend to have longer leases, have held up better than the retail and hotel industries, which have seen defaults and bankruptcies surge thanks to lockdown measures. Rent collections for office tenants were hovering around 95% for the biggest public landlords in the city as of the third quarter.

Major tech tenants including Facebook Inc. and TikTok signed big leases in the city even after the pandemic started, a signal that not all companies are retreating.

Still, pressure is mounting as the pandemic drags out. Offices have been open for months, prepared for social distancing and other safety measures but still largely empty.

Meanwhile, the pressures of the global recession are forcing most firms to cut costs and offices that aren’t being used are a tempting prospect to be the first to go. The long-term outlook for rents is also hard to predict at this point, though it’s clear there will be plenty of choice.

So companies are looking for sublessors.

“Remote-working has really been accepted and adopted by many industries,” Danny Ismail, an analyst at commercial real estate research firm Green Street, said. “With an increased focus on cost-cutting, more remote-working and shrinking office square footage is an easy solution to do that.”

Hedge fund York Capital Management explored getting rid of 40% of its space at the General Motors Building in midtown Manhattan, Bloomberg reported in August.

Japanese advertising giant Dentsu Group Inc. also is looking to sublease its new New York headquarters, which is still under development. Meanwhile, Barclays Plc is looking for a new headquarters on the west side of Manhattan that’s roughly half the footprint of its current Times Square skyscraper.

For the biggest tenants, it would take years to pare back space significantly. “The immediate danger is the relocation of people, not companies,” said Kathy Wylde, president of the Partnership for New York City.

Wylde said she spoke to a chief executive officer whose lease is up in two years and said his employees are unhappy in New York and are asking to transfer to another state where the business has a major operation.

“He said if they still feel that way in another year, he may relocate the company,” she said. “The businesses are not looking to move, but if their people put on pressure, that will change.”

Meanwhile, demand has dropped dramatically, with leasing down 45% in the third quarter from last year, according to Savills.

Rents have held up, largely due to a lack of deals in the first few months of the pandemic, but are starting to fall. Asking rents dropped 3% to $80.29 per square foot in the third quarter, the biggest decline since 2017, Savills said. SL Green saw its rents fall 6.7% on average for leases it signed in that period.

“Subleases and people not taking on new offices at the moment just creates a question about what types of income these buildings will face moving forward,” said Jim Costello, senior vice president at Real Capital Analytics Inc. “The longer it goes on, the worse it’s going to get.”

Major leases also are expiring soon. Deutsche Bank AG, Ernst & Young and AllianceBernstein LP are among tenants exiting the financial district, Times Square and midtown Manhattan in the next three years. Two of them have signed new leases in Hudson Yards on Manhattan’s west side, where new skyscrapers have been shooting up for the past few years.

Still, even highly anticipated developments are running out of steam. At least two big skyscrapers at Hudson Yards have failed so far to find anchor tenants, delaying construction. So has Two World Trade Center, the final tower to be completed in Larry Silverstein’s mega downtown development.

Even with all the turmoil ahead, some Manhattan landlords are still pushing forward with the bullish attitude that’s defined the city for so long: If you build it, they will come.

SL Green has already begun redeveloping One Madison Avenue, which is located a few dozen blocks south of One Vanderbilt. The building is slated to be completed by 2024 and doesn’t have any anchor tenants yet.

“Real estate is a cyclical business so, when you start these long processes, they take years to develop, plan, construct, so you’re always at risk,” Steven Durels, director of leasing at SL Green, said in an interview. “We’ll get past this period and we have confidence in New York City.”