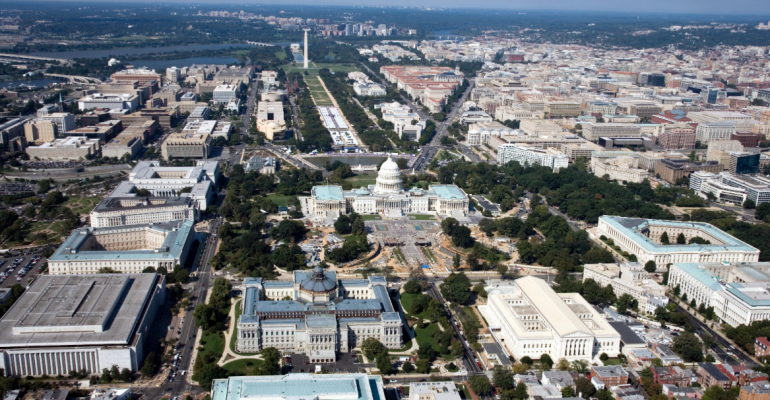 Total office vacancy for Washington D.C. stands at 12.5 percent, according to JLL, and year-to-date net absorption is at negative 218,756 sq. ft.

An expected supply surge of high-end office product in downtown Washington, D.C. this year will not be met with nearly enough demand. Investors and developers are bullish, however, on the prospects for occupier demand for offices in the Northern Virginia sub-market, which is part of the Washington, D.C. metropolitan statistical area (MSA). That would be thanks to an expected uptick in defense spending under the Trump administration.

The federal government’s efforts to reduce its footprint in the last few years resulted in “stagnant demand” for space by office-using entities in downtown D.C., according to John Sikaitis, head of D.C. research at real estate brokerage JLL.

“Our market is highly dependent on the federal government: legal accounts for 25 percent of office users in region. That rises to 45 percent when federal contractors are included. When you count lobbyists, associations and law firms, about 70 percent of occupiers are government-focused,” says Sikaitis.

Despite the expectation of increased government spending on defense and related technologies, most classes of government-related office occupiers are not enjoying such favorable circumstances. Compared to this time last year, the federal government has added 3 percent fewer positions, according to Elizabeth Norton, managing research director of the Mid-Atlantic region at real estate services firm Transwestern.

The local economy is expected to add 3,645 new jobs by the end of 2017, much fewer than the 5,601 jobs created in 2016, according to a first-quarter report by real estate services firm Colliers International.

Total office vacancy for Washington D.C. stands at 12.5 percent, according to JLL, and year-to-date net absorption is at negative 218,756 sq. ft. Overall vacancy decreased eight basis points in the first quarter, however, because 390,286 sq. ft. of existing office space was demolished.

“Our outlook for the district is bleak, marked by flat to low demand. Supply of new product is at an all-time high,” says Robert Hartley, director of research at Colliers International.

A total of about 6.2 million sq. ft. of space is currently under construction in the market, according to Transwestern. That compares to about 3.5 million sq. ft. of space a year ago. The firm expects overall vacancy to increase from 9.2 percent today to the low-10 percent by the end of the year, says Norton. Two trends are contributing to this increased vacancy, Norton notes. The first is a large construction pipeline, with 3 million sq. ft. being delivered to the market with no pre-leasing. The other is office densification. Since 2010, D.C. office occupiers relocating to other parts of the market have shed an average 18 percent of space with each move.

The timing for stagnant demand couldn’t get worse. Developers, upon seeing a drop in vacancy at trophy properties 15 months ago (to 7 percent, from an all-time high of 15 percent six years ago), began building a spree of class-A assets. In some cases, class-B and C assets were acquired and repositioned into class-A developments. About 3 million sq. ft. of repositioned assets came from the class-B and -C market, and were put into the class-A market, according to Sikaitis.

“This cycle was marked by developers saying ‘I’ve got a B-building to demolish or renovate into an A building’ to grab flight-to-quality demand,” says Hartley.

Now, high-end space is expected to sit on the market, and there’s more clamor for class-B space.

“The high end of the market attracts lobbying firms and law firms as biggest occupiers.

But now there is no near-term law firm demand. The next law firm leases expire in 2019. The product delivered in 2017-2018 in many cases will have to wait for occupiers,” Sikaitis adds.

Most demand growth now is coming from associations, non-profits, technology companies, co-working firms and new media businesses, says Sikaitis, and they are interested mostly in class-B and class-C properties, just as there’s a dearth of them.

JLL is forecasting that class-A- plus product will see a 7 to 10 percent vacancy increase, reaching the low-20 percent in the next 15 months. “There’s going to be a correction in rents for trophy/class-A plus space. We will probably see rent declines by 10 percent this year,” Sikaitis says, citing oversupply and lack of demand for the product. On the other hand, JLL forecasts 7 to 10 percent growth for class-B and –C office rents in the next 20 months.  Net effective rent growth will likely be between 10 and 15 percent, according to the company.

Developers of class-A buildings are looking to opportunities presented by increased defense spending by the government, industry sources say. That will have the greatest impact on the office market in north Virginia.

“Demand for all classes of office space is expected to grow this year in north Virginia. We started seeing recovery there at the end of last year, and this quarter we are starting to see demand from federal contractor dollars,” says Hartley.

From October 2015 to September 2016, the D.C. metro area received $70 billion in government contracting awards, according to USspending.gov. North Virginia captured $40 billion of contract dollars. To compare, the whole state of California got about $54 billion.

“We expect a bump in defense spending that will benefit Northern Virginia, and that includes spending for border security and related technologies. Things are really rosy for that market this year,” Hartley notes.