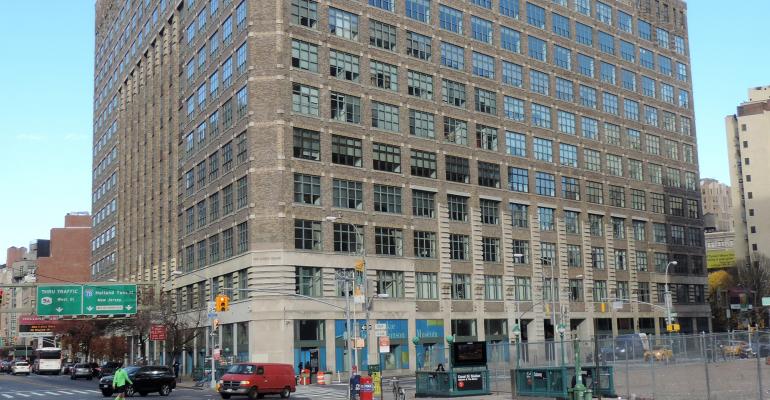 Oxford Properties, the real estate unit of Canadian pension fund OMERS and CPPIB bought a 1.3-million-sq.-ft. freight terminal in Manhattan for conversion into an office building.

(Bloomberg)—Oxford Properties Group is spending about $2 billion to transform an old freight terminal on Manhattan’s West Side into a 12-story office building, according to a person with knowledge of the plans.

Oxford, the real estate unit of Canadian pension fund OMERS, and Canada Pension Plan Investment Board bought the property from Westbrook Partners LLC and Atlas Capital Group LLC in January for $700 million, Dean Shapiro, the Toronto builder’s head of U.S. development, said in an interview. That sum is part of the total investment, said the person, who asked not to be identified because the matter is private.

The project, one of four Oxford is working on with Canada Pension Plan, involves turning 1.3 million square feet (120,000 square meters) of industrial space at Hudson Square, near Greenwich Village, into what Shapiro called “the modern workplace,” an environment that encourages people to meet, mingle and work together.

Shapiro traveled to cities including London and Chicago to see how companies use workspaces to help keep employees motivated and productive. He found that open spaces with a connection to nature were often winners. Oxford’s project, St. John’s Terminal, is a grand industrial site with more than 400 feet of unobstructed west-facing views on Hudson River Park with lots of natural light.

“In this dogfight for talent, we need to have the type of facility that’s going to attract and retain talent,” Shapiro said. The idea is to take “a shot at something that has not been done in New York before and is not traditional but is completely market-relevant and undersupplied.”

Oxford declined to comment on the total cost or on Canada Pension Plan’s role in the project’s financing.

The development, Oxford’s first in the U.S. as lead and its biggest investment ever in that role, is one of about 30 the builder has going around the world. Oxford has also teamed up with Related Companies LP on a $25 billion project at Hudson Yards -- at 28 acres (11.3 hectares), the largest undeveloped piece of property in Manhattan -- including the $3.8 billion 50 Hudson Yards.

The company has more than $10 billion of assets under management in the U.S. and nearly $40 billion globally, with plans to reach about $70 billion by 2023, according to a spokesman. It operates a global portfolio of more than 60 million square feet.

Oxford plans to maintain the historical facade of the structure, which was built in 1934 and has track beds running through the second floor, and maximize the size of the floor plates to create a wider, more collaborative environment, Shapiro said. The design includes plenty of glass as well as a greenscaped rooftop and a wraparound terrace. The unusually wide building -- at 550 Washington St., at Houston Street and the West Side Highway -- was originally designed to hold as many as 227 train cars, Oxford said.

The view will have “the widest sunset in New York,” Shapiro said, invoking what has become an unofficial tag line for the project around the office.

Oxford, which aims to have the space ready for occupancy by 2022, is currently in talks to lease it, with half a floor the likely minimum. The company is targeting tenants in sectors such as technology and financial services.

“My sense is it will start, at the very least, with relatively large tenants who will be attracted to the building because of its unique features,” Shapiro said. “Its location and its dimensions and its sheer magnitude -- it has been the object of lust to potential developers for decades.”