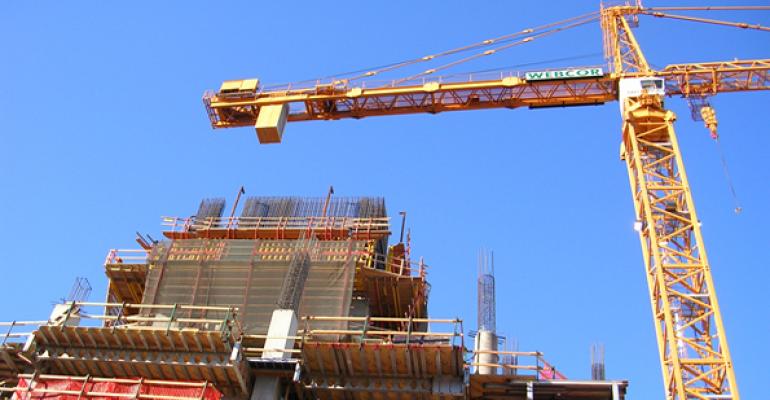 Time to Worry About Speculative Construction? Not Yet, Experts Say

Strong construction starts were evident in almost every property sector this year, rising again a long dip in demand from 2009 to 2013, and speculative construction was definitely a part of the trend.

According to recent data from research firm CoStar Group, the number of new office and industrial projects is approaching the 10-year peak seen in 2007, and the amount of unleased new space coming on-line is close to pre-recession levels. Of course, the downturn happened right after the last building boom, but industry experts say investors have learned their lesson and are still exhibiting caution when borrowing money for new construction to avoid overbuilding. The amount of speculative construction, long a bell-whether of sector prosperity, is matching current demand nicely, the experts say.

The industrial sector leads the way in speculative development, which totals more than 50 percent of industrial product currently in the pipeline, says Suzanne Mulvee, director of research and senior real estate strategist at CoStar. The activity in large part comes from the warehouse sector, which is struggling to keep up with e-commerce demand. “We haven’t seen this much development in industrial since 2001,” she says.

A recent report by commercial real estate services firm Avison Young claims that speculative industrial construction delivered in the U.S. has increased 240 percent since 2012, from 43.3 million sq. ft. to 147 million sq. ft., and that’s still not enough to meet existing demand. Investment sales of spec buildings increased by 63 percent this year from 2014, according to the company’s national industrial capital markets group, which predicts that sales volume could climb 15 percent higher in some markets. Because of this, pricing on industrial assets is expected to increase by up to 8 percent in many markets, the group forecasts.

Companies such as Majestic Realty Co. are buying up more land to build new spec warehouses, such as the firm’s recent acquisition of 530 acres in Aurora, Colo. to expand its Commercenter business park to 1,500 acres. Randy Hertel, executive vice president and development director at Majestic, says e-commerce has driven demand in the big-box warehouse sector. “We’ve got a dozen firms looking for more than 100,000 sq. ft. in Denver, and triple that amount looking for 50,000 sq. ft.,” Hertel says. “Our 4 percent vacancy rate is part of it, but it’s more about the overall strength of the economy. We should see strong demand at least until 2017.”

Speculative development in the office sector has been somewhat muted, and that’s okay with most investors who don’t want a repeat of the last overbuilding cycle. David Burden, a principal with real estate services firm Colliers, says the amount of speculative office space varies by market, depending on the current vacancy rate. The lower the rate compared to that market’s historic average, the more likely spec construction has started or soon will. Chicago, for example, typically starts to see speculative construction when it reaches office vacancy of 12 percent, which the market hit this year, Burden says. In cities where vacancy has hit extreme lows, like San Francisco and New York City, the only obstacle to speculative construction are increasing construction costs, he adds.

Office tenants in the technology sector are driving more than 50 percent of the new construction demand, enough to push the sector through 2016, Burden says. Next year, however, the industry might reach a plateau.

“We’re not at a threat of overbuilding, as companies are operating leaner, and making expansion decisions with better planning, not like the last cycle when tenants would lease 20 percent more space than they needed,” Burden says. “The only reason I see a plateau is that you’re going to have quality class-A space that was only built 10 to 20 years ago coming onto the market as the prime tenants move into the new buildings.”

Hospitality is another sector where there’s new construction in specific markets. While hotels are not technically built on a speculative basis, cities such as New York City and Houston have seen more new development than expected, says Kent Michaels, vice president in the hotels and hospitality group of real estate services firm JLL. While current construction figures for hotels are at about 2 percent of the existing supply, a bit below the national average, certain markets and hotel types are seeing more new development than normal, he notes.

Denver, Nashville, Tenn., Seattle and Dallas, which have seen revenue per room growth of about 10 percent in the past year, all are attracting developers’ attention, Michaels says, and usually in a specific product type. “Select-service hotels are taking up about 75 percent of the national pipeline,” he says. “Whereas a full-service property can cost, at minimum, about $200,000 per room and up to $1 million per room in top markets, select-service hotels cost significantly less, from $100,000 to $200,000 per key in most markets.”

The two other major commercial real estate sectors, retail and multifamily, are on different ends of the spectrum when it comes to new construction. Though retail sales are up for the holiday season, bricks-and-mortar retailers are struggling, in part due to more people shopping online, Mulvee says. Only major urban markets are gaining more retail space, as new office and multifamily towers attract shoppers to downtown areas.

According to CoStar figures, the level of multifamily construction is 1.5 times what it was 10 years ago, an amount of new development not seen since the 1980s, Mulvee says. These apartment buildings are getting filled, but not by the tenants most experts were predicting, Mulvee notes.

“These new class-A apartment towers—they’re not getting the millennials as residents because unless you’re a recent law graduate or other professional, the rents are just too high for young people,” she says. “These places are going to generation x-ers, and more baby boomers than people realize. And for the young people who are renting, at some point the strollers are going to take precedence over their condo life. Multifamily, even with this demand, is at risk of overbuilding if vacancy starts to rise.”