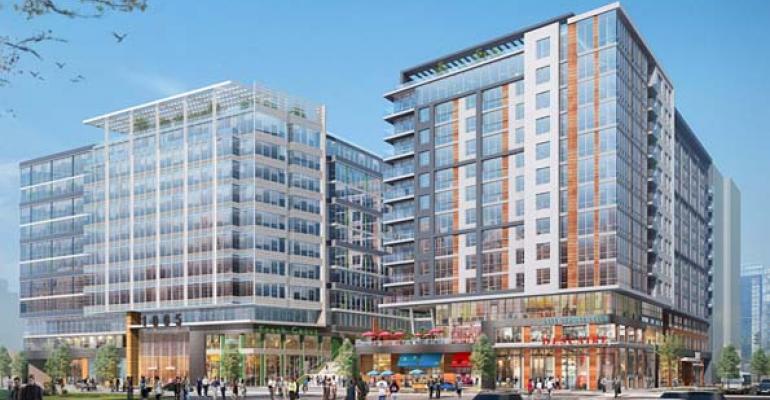 First quarter 2013 results from a few commercial real estate companies show Washington, D.C. rents have stayed flat for eight straight quarters, and concessions remain high. Of the major markets CBRE tracks, Washington, D.C. had the highest increase in its vacancy rate in the first quarter, 40 basis points. The office vacancy rate now stands at 14.2 percent, according to CBRE. “Strength has definitely switched in the past 18 months in favor of tenants,” says Jeff Kottmeier, director of research and analysis with CBRE’s Washington, D.C. office.

The slowdown can be directly traced to both the uncertainty with the federal budget, and to public and private tenants looking to reduce size for efficiency reasons, says John Germano, an executive managing director with CBRE. “I don’t think we really saw a hit from sequestration,” he says. “It’s mostly firms such as General Dynamics and Northrop Grumman who have just decided not to move forward with expansions until they understand more what the federal cutbacks will mean.”

On the public side, along with drops in personnel, the Office of Management and Budget has frozen all further leasing plans, and is requiring all federal tenants to come up with a three-year plan to reduce occupancy, with the report due by mid-May. “While many large tenants are being proactive and entering the market today well in advance of their 2015-2017 lease expirations, near-term tenant demand is limited,” says Mike Ellis, mid-Atlantic market director for Jones Lang LaSalle.

Thomas Fulcher, an executive vice president with Studley in Washington, D.C., says the law firms in particular are looking to cut back, he says, and a number of large firms are looking at lease expirations in the 2016-17 timeframe, including Sidley Austin and Venable. “It’s going to be an interesting time to see where everybody lands,” he says. “Where 10 to 15 years ago, all the law firms thought 750,000 sq. ft. was a good size to be in, now everybody’s getting tighter and looking for probably around 550,000 to 600,000 sq. ft.”

More significant, Fulcher says, is that with a current tightness of large blocks, there is a glut of small space. “We did a space report recently on the 40,000-sq.-ft. range, and there were about 50 options,” he says.

However, both Germano and Fulcher agree that the region is still a stable, top-shelf market, regardless of the current slowdown. Buyers still outnumber sellers of office buildings, and development is starting to crop up in choice markets.

The CityCenterDC project, a four-block mixed-use property being developed by Hines along New York Avenue, is expected to be finished by the end of the year, but the 520,000-sq.-ft. office portion will be complete in June. Covington & Burling anchors the project at 420,000 sq. ft., the American Hospital Association recently agreed to lease 40,000 sq. ft. and two other tenants have committed to leases to bring the offices to 95 percent occupied, says Howard Riker, managing director of Hines in Washington, D.C.

Riker says he’s not worried about keeping leases going at the new property. “Tenants have recognized the quality of the design and construction of the buildings, the strong and convenient location, the benefits of the mixed-use nature of the project, and the project’s strong sponsorship and management,” he says, referring to the TFI US Real Estate Fund, which is anchored by Qatari Diar Real Estate Investment Co.

Doug Donatelli, CEO of First Potomac Realty Trust, agrees that the flight to quality will be what separates the D.C. office market for the next couple of years. “You’re going to see that companies still want to move to newer, brighter offices that have some sustainability thrown in,” Donatelli says. “The law firms and technology companies want to consolidate for efficiency, but they can do that while also getting new space.”

His firm is building Storey Park, a renovation of the former Greyhound bus station in the North of Massachusetts (NoMa) district. The 700,000-sq.-ft. new building at 1005 First Street NE will have a little less than 300,000 sq. ft. of offices, and the rest will be multifamily units and bottom floor retail. “I think there’s both a demand for new office and for retail in that area,” he says. “Elsewhere in D.C., though we’ll probably see this slow leasing trend continue for some time. We all know that it’s cyclical, we’ll see the landlords come back on top again in a few years.”