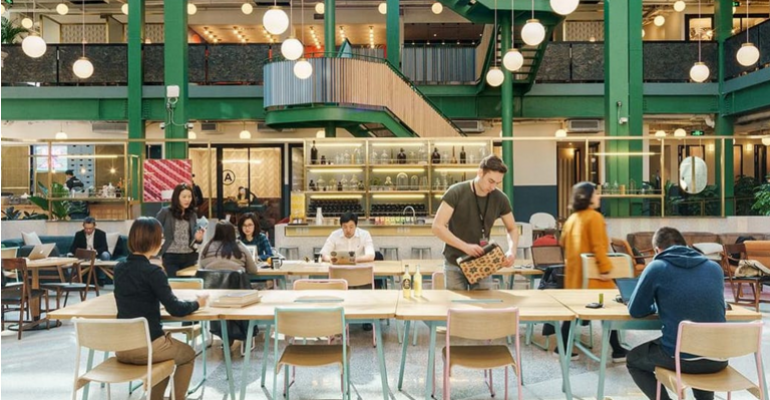 WeWork, With $900 Million in Sales, Finds Cheaper Ways to Expand

The company reduced recurring costs on constructing and running offices, in part because it gets discounts for buying in bulk.

(Bloomberg)—As WeWork Cos. has grown to 200 buildings across the globe, the company said its increased size is helping cut costs for everyday needs like glass, wood flooring, aluminum and light fixtures. Early signs of financial improvement are encouraging for a co-working business that critics say is overvalued and spends with abandon.

Last year, the New York-based startup generated about $900 million in revenue, mostly from its main business of renting out desks and offices to small and large companies, said Artie Minson, WeWork’s president and chief financial officer. The company also reduced recurring costs on constructing and running offices, in part because it gets discounts for buying in bulk. “This is a business where scale matters,” Minson said. “We’re building global supply chain capabilities, which allows you, frankly, to build cheaper than anyone else out there—materially cheaper.”

WeWork isn’t required to report financial information to the public but agreed to provide select numbers in an interview with Bloomberg.

WeWork, which just turned eight years old, is one of the richest private technology companies, with $4.75 billion in total funding for the business and its subsidiaries. But Adam Neumann, the chief executive officer and co-founder, has spent the last couple years trying to change attitudes toward money inside headquarters. He chastised employees in 2016 for a “spending culture” around the time that the company cut revenue and profit forecasts.

Being a private company, WeWork is rewarded for revenue growth and ambition. IWG Plc, a publicly traded co-working company that will report its annual financial performance next month, is expected to post 2017 revenue of £2.36 billion ($3.2 billion), which is more than three times that of WeWork. Yet, IWG’s $2.97 billion market value pales in comparison to WeWork’s $20 billion. Investors have said WeWork can outmaneuver competitors by exporting a lifestyle brand popular with young professionals around the world and finding ways to keep people on its properties for longer. In addition to office space, WeWork is experimenting with dorm-style living arrangements, community meet-ups, gyms, and education, including a private elementary school.

Minson said that starting about two years ago, WeWork went “literally, line by line” through its list of needed expenses such as desks, chairs and internet connections to make sure they were getting the best deals. In the last year, WeWork reduced gross capital expenditure per desk—including expenses like building renovations—to $9,504 from $14,144, the company said. WeWork declined to say how much it lost last year, though the company said it would be profitable if it didn’t count “growth investments,” such as entering new markets and developing new products.

WeWork reduced operating costs associated with running its locations, including salaries for staff who manage and clean them. One expense not included in these calculations is the cost of acquiring new customers through promotions such as free rent or discounts. As the company’s office buildings have become bigger—some have more than 3,000 members—WeWork can utilize the same number of staff to service more customers, Minson said.

Even as WeWork manages costs, it has high expectations for the future: The company currently has 200,000 members but plans to double that by the end of this year. It expects to start next year on pace to generate at least $2.3 billion in revenue. It also plans to double the number of locations to 400 this year.

Around a quarter of the company’s revenue now comes from large companies such as Microsoft Corp., Facebook Inc. and General Electric Co., which often make large, long-term commitments compared with the typical startup customer. WeWork is also aggressively pushing into Asia and made three subsidiaries last year for Japan, China and Southeast Asia. In a fundraising round over the summer, Japan’s SoftBank Group Corp. invested $3 billion in WeWork and committed $1.4 billion to the Asia subsidiaries.

Minson said despite all the growth, the company has no immediate plans for an initial public offering. “We are running the company with all the practices that a public company would run with, but no timing has been set,” he said. At least one source of IPO pressure has dissipated: As part of SoftBank’s funding, the company closed a “meaningful secondary” sale, Minson said. That allowed all shareholders and employees who had worked there for at least a year to sell some stock.