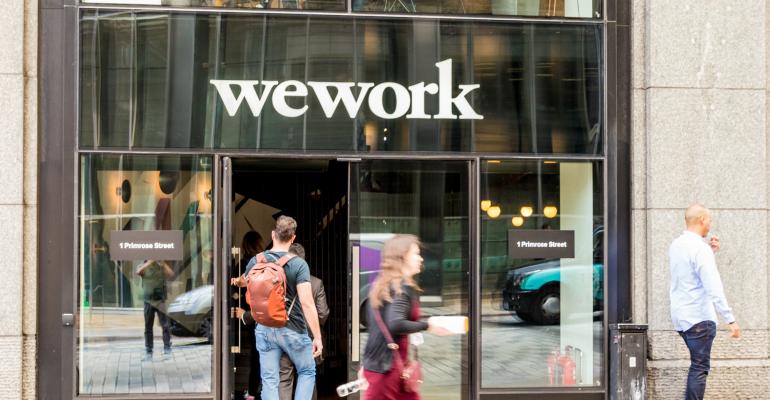 The number of co-working offices across Europe has grown by more than 200 percent in the past five years.

(Bloomberg)—WeWork Cos. gets a lot of headlines for its breakneck expansion into new markets, and that’s only likely to increase now that it plans to go public. Yet the nine-year-old company faces stiff competition in Europe from established work-space providers like IWG Plc and local startups.

The number of serviced and co-working offices across Europe has ballooned by more than 200 percent in the last five years, according to a report by real estate broker Colliers International Group Inc. WeWork has helped to drive this growth: it has nearly 50 locations in London and has added sites from Manchester to Moscow.

“The IPO is a great milestone in the evolution of the flexible work-space scene,” said Tom Sleigh, head of consultancy on the industry at Colliers. “It’s a signal to other operators that they’re able to expand.”

While WeWork initially rose with the advent of the gig economy and an explosion of startups, big companies are increasingly seeking more flexible offices, too. Corporate clients now make up about a third of WeWork’s customers. IWG, which owns the Regus brand, has traditionally catered to corporate customers.

WeWork and IWG account for about 78 percent of the European market for flexible work-space, Colliers data show. WeWork had about 600,000 square meters (6.5 million square feet) of office space in Europe at the end of 2018. That put it ahead of IWG, whose Spaces brand is more closely comparable to WeWork venues than the traditional serviced offices operated by its Regus unit. IWG is considering selling Spaces.

A growing list of local operators are now battling WeWork and IWG for market share. Blackstone Group’s The Office Group and Germany’s Design Offices are at the front of the chasing pack. Each of the firms has about 80,000 square meters of flexible office space, according to Colliers. In many major European markets, including London and Paris, smaller local players collectively account for a majority of the flexible office space market, according to the Colliers report.

WeWork’s IPO, and the financial information it discloses in the process, could prove useful to its rivals, Sleigh said. These companies will be eager to learn how much WeWork spends to open new locations as well as its long-term occupancy rates and the rate at which tenants renew their leases, he said.

The lion’s share of flexible office space in Europe is concentrated in a few cities, particularly Amsterdam and London, which is the world’s biggest city for co-working. Now other cities such as Berlin, Paris and Rome are seeing rapid expansion.

“Other cities are playing catch-up in some respects because the industry is less developed,” Sleigh said. “We expect a lot more of that as landlords become much more prepared to offer more and more services to occupiers as a response to WeWork spaces.”

Changes in the workforce underpin the spread of flexible offices. Across Europe, nearly half of workers are self-employed, on temporary contracts or part-time -- perfect conditions that have fueled the flexible work-space boom, Sleigh said.