10 Disrupters: Individuals Who are Charting the Future of Commercial Real Estate 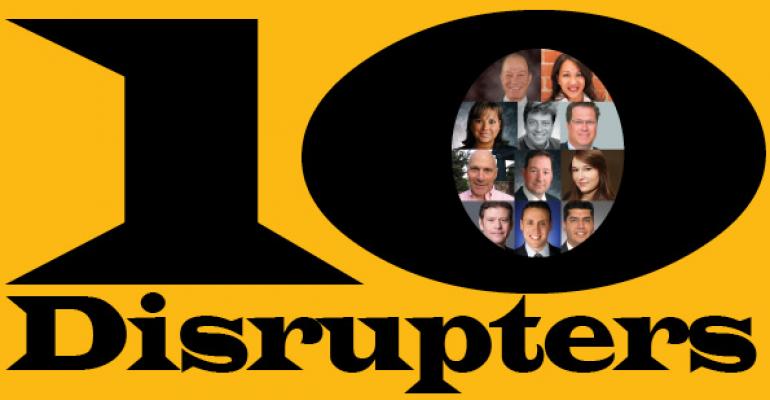 Disruptive innovations in the business world help create new markets or alter existing markets. Such innovations sometimes lead to old-guard companies being supplanted by new competitors. The real estate industry is no stranger to this—especially in the retail industry.

How many mall fixtures have disappeared entirely due technological changes? The bookstore and consumer electronics sectors are still experiencing this shakeout due to the growth of online marketplaces. And then there’s the case of Blockbuster, which, like all video stores, was made obsolete by DVDs being sent by mail and movies being streamed online.

New technologies also affect office and industrial tenants, and end up hurting older competitors that won’t or can’t adapt. For example, Sony went from ruling the roost with the Walkman and Discman to seeing its market share disappear with the emergence of the iPod and other digital music players. And Kodak failed to adapt to the move from film to digital cameras, which nearly destroyed the company, and which surely affected the Rochester, N.Y., economy and commercial real estate sector.

But disruption doesn’t only affect the industry on the tenant side. Innovations within the commercial real estate sector itself have constantly forced the industry to evolve.

The emergence of securitization in the 1990s impacted all commercial real estate lenders and borrowers—for good and for ill. It emerged as a competitive source of capital with volumes growing steadily up through 2007. But the Great Recession exposed flaws in the securitization business model. The CMBS sector disappeared entirely for a couple of years and only now is reemerging.

In addition, the brokerage business has also morphed. Brokerage firms no longer are just dealmakers. They provide a suite of services for their clients. And that business, too, has changed from being local and regional to national and, increasingly, international.

In this spirit, NREI’s editorial team sought to identify individuals and firms that have the potential to disrupt the industry in small and big ways.

For example, historically, the industry has been dominated by five property types: multifamily, office, retail, industrial and hospitality. But new sectors have emerged. We've seen the development of the single-family rental sector as an asset class and how that space has drawn the attention of private equity firms and other institutional investors.

Another sector that’s rapidly growing is the medical office space. Several REITs play in that world. Other investors are looking to strike due to the aging U.S. population and its growing demand for healthcare services. (For a look at some other emerging property types, check out our recent gallery).

Our 10 Disrupters feature started from the premise of identifying key trends across property types and disciplines. We identified trends—including the urbanization of retail, crowdfunding, the growth of microapartments and the reemergence of CMBS, among others—and then sought to identify industry figures that embody these concepts.

In many cases, the individuals we selected are not the only ones pursuing the idea. (Crowdfunding, for example, has witnessed a bevy of firms emerge on the scene since the JOBS Act passed in 2012.) So our disrupters are not meant to be the be-all, end-all list. Instead, think of it as a conversation starter.

We’d love to hear your feedback on our selections. Feel free to leave a comment this feature. Or, alternatively, drop me a line about other disrupters who are making their mark on the commercial real estate world.