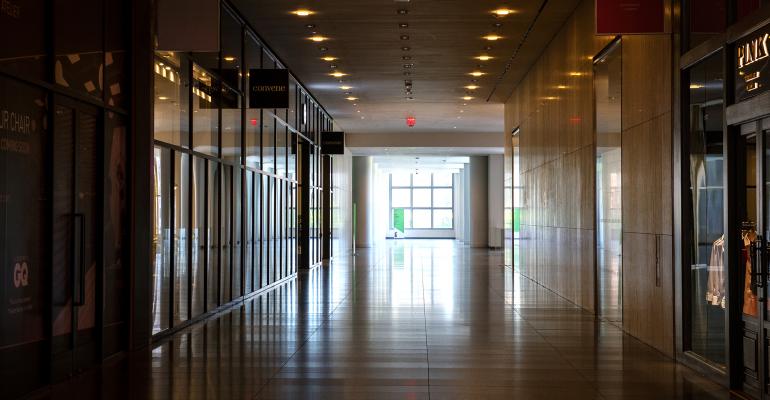 Is Business Interruption from COVID-19 Likely to Lead to a Spike in Court Cases?

Tenants, landlords and insurers are battling over who is responsible for covering losses for temporary closures.

As they continue to grapple with the economic fallout from the coronavirus pandemic—and wait for further federal relief—commercial real estate tenants may increasingly sue landlords to seek damages under business interruption insurance coverage. However, attorneys caution that tenants may find little success with this legal avenue.

In the suit, Jemb said it sustained more than $3.8 million in losses after tenants stopped paying rent—most notably the flagship location of clothing retailer H&M. Jemb claimed the mall’s losses arose from tenants’ exposure to COVID-19, which it maintains is a pollutant, as well as from government-mandated shutdowns this spring. The suit maintained that the COVID-19 business interruption claim fell under its environmental policy from Greenwich Insurance. It sought a $3 million judgment from Greenwich Insurance. That amount equals the maximum coverage limit under Jemb’s environmental coverage.

The dispute won’t be settled in court, though. Without explanation, Jemb dropped the lawsuit on Oct. 26. Representatives of Jemb couldn’t be reached for comment.

Nonetheless, the issues raised in the suit shine a light on business interruption coverage in commercial real estate.

“However, if a business like a restaurant or a fitness center can’t survive financially without additional stimulus, it may be more motivated to sue its insurance company over the denial of its business interruption claim,” Gorenberg says.

Insurers, meanwhile, are rejecting the “vast majority” of business interruption claims connected to the pandemic, he notes.

Thus far, most court rulings about denial of pandemic-era claims under business interruption coverage have favored insurers, but a couple of rulings have sided with tenants, according to Gorenberg.

Oftentimes, the question of whether a tenant has a legitimate claim rests on whether a business interruption policyholder suffered “physical loss or damage” to its property, Gorenberg says. Insurance companies generally focus on the word “damage,” and contend that neither the presence of the coronavirus on a policyholder’s property nor the impact of government-ordered shutdowns meets the definition of damage. “In contrast, policyholders often focus on the word ‘loss’ and argue that there is coverage for loss of use of their property,” he notes.

From the landlord’s perspective, if the property owner provided rent relief, the insurance company would likely deny a claim for the loss of business income because the loss was essentially voluntary, according to Gorenberg. “Looking at a variation on the issue from another angle, a tenant’s business interruption insurance claim might have interesting ramifications,” he says.

For example, rent for a retail space may be based partly on a percentage of the tenant’s sales revenue. If the tenant’s receipts from retail customers are down, but the tenant has successfully collected on its business interruption coverage, Gorenberg wonders whether the lease might require that the insurance proceeds be factored into the calculation of rent.

In fact, some policies specifically exclude viruses, Gorenberg says. Even if a policy doesn’t cover a loss stemming from the virus, it might include a pollution exclusion that an insurer may cite to deny coverage, he adds. The bottom line is that no one can make a blanket statement that business interruption insurance does or does not cover losses caused by diseases, including COVID-19, he notes.

“Those who do have a policy that covers business interruptions of this type are very lucky and, while the fact that it’s so rare means it won’t affect many businesses in the current situation, tenants are going to learn these lessons and become savvier when shopping for policies going forward,” Wander says. “Future agreements will likely have to address business interruption scenarios involving pandemic-related closures.”

Rather than legal challenges over business interruption coverage, tenants these days are more often entangled in property disputes wrapped up in bankruptcy cases. That’s according to commercial litigator Gayle Klein, a principal in the New York City office of law firm McKool Smith PC.

Meanwhile, it’s unclear whether landlords and lenders will ramp up court battles related to the pandemic, she adds. “What has been heartening is that lenders and property owners have been trying to work out deals based upon economic realities,” Klein says.

For example, additional relief from the federal government could support businesses “on the brink of danger,” she says, and therefore could limit court cases—including foreclosure proceedings—that involve tenants, landlords and lenders.

“The last recession did not see a lot of commercial foreclosures. The real devastation to the economy was through the issuance of toxic mortgages that people could not afford,” Klein says.