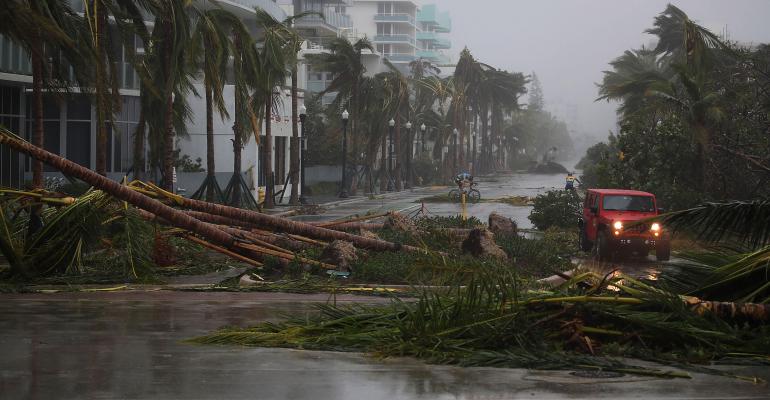 The hurricane dwindled to a Category 2 before reaching the Tampa Bay area. That could keep damages under $49 billion, with insured losses at about $19 billion.

(Bloomberg)—Post-hurricane Miami got back to business with a puff of smoke.

It came from the fat Arturo Fuente Opus X that Jorge Artiles was smoking after he opened his cigar shop in a strip mall. Asked why he decided to open only one day after Hurricane Irma turned the surrounding Brickell Avenue financial district into a lake, he said: "Because today is Monday."

The first day of the week offered the city and all of Florida relief after facing what could have been a cataclysm. Hurricane Irma weakened as it moved north, leaving in its wake a state that avoided the worst predictions of destruction. By one estimate, the cost of total damages dropped to $49 billion from $200 billion. Still, almost 7 million were without power in the region and millions were displaced in what may yet go down as one of the worst storms in Florida’s history.

The center of the system, America’s second major hurricane in 15 days, softened to a tropical storm Monday morning and was set to be a mere depression by afternoon, the National Hurricane center said. As the storm headed north, threatening torrential rains in Atlanta, a storm-surge warning was discontinued for parts of southern Florida.

Across the state, roads were being cleared, buildings were repaired and assessed and an army of utility workers deployed from a network of temporary work camps. The Florida Keys, the delicate string of islands where Irma made landfall Sunday morning as a Category 4 storm, were closed off after having suffered extensive damage.

Floridians the length and breadth of the state emerged and began to take stock.

A tree had come crashing through the roof of Donnie Hickey’s mobile home at the Camp Inn near Crooked Lake in Frostproof, about 75 miles east of Tampa. The 39-year-old pilot for the Florida Sky Dive Center was sitting in his son’s room at the time.

"I’m just grateful that his truck was able to help absorb the blow," he said. "If it wasn’t there, that tree would’ve easily split my home in half."

In Dade County, which includes Miami, the airport remained closed, though it was expected to open Tuesday, according to a news release. About 60 percent of traffic signals were out and crews were removing debris that lined and blocked roads. A 7 p.m. curfew remained in effect.

“It wasn’t as catastrophic as we were told, as we feared,” Miami Mayor Tomas Regalado said in an interview. “The question now is if we are prepared for sea-level rise and a storm surge with 100,000 residents along the waterfront.”

Regaldo said he planned to ask voters to authorize a $200 million bond issue for hurricane protection.

But Irma’s impact was falling short of predictions by a number of measures. On Friday, NextEra Energy Inc.’s Florida Power & Light utility was warning that 4.1 million of its customers could lose power. As of 1:30 p.m. New York time, about 3.6 million were down. About 485,000 Georgia Power customers mostly in coastal and southern regions are without power. Duke Energy Inc. estimated that Irma could knock out service to more than 1 million customers; about 1.2 million were without power.

Flooded buildings, or those where crews found damaged and unsafe connections at their meters, may wait weeks to get power back because private electricians will have to do the work, FPL officials have warned. Almost 36,000 homes and businesses in New York and New Jersey were still waiting to be reconnected 35 days after Superstorm Sandy struck the region in 2012, according to an Energy Department report at the time.

Financial estimates were far more optimistic. Chuck Watson, an Enki Research disaster modeler in Savannah, Georgia, had predicted total damages as high as $200 billion. However, the hurricane dwindled to a Category 2 before reaching the Tampa Bay area. That could keep damages under $49 billion, with insured losses at about $19 billion, sparing insurance companies, Watson said. Bloomberg Intelligence analyst Jonathan Adams puts insured losses now at $13 billion, down from an earlier estimate of $33 billion.

“There may yet be a Florida insurance market on Tuesday,” Watson said.

By comparison, total losses from Hurricane Katrina reached $160 billion in 2017 dollars after it slammed into New Orleans in 2005. While Irma didn’t reach that level of destruction, it could surpass the damage caused by 1992’s Hurricane Andrew that punched its way across the Florida peninsula. The dramatic drop in Irma’s estimated cost, though, didn’t mean the region would be spared a savage human toll. It laid waste to the small island of Barbuda, killed at least 25 people and left thousands homeless across the Caribbean. The low-lying Keys were devastated, with photos showing cars submerged almost to their roofs.

Military ships and aircraft delivered thousands of tarps, 40 pallets of food, medical supplies and water to the Virgin Islands, while evacuating more than 70 patients, according to a news release from the U.S. Northern Command. Ships were in position to begin search and rescue work when weather permits.

And even a weaker Irma possessed the power to disrupt. Atlanta, with its dense canopy of trees, was effectively shut down Monday as intensifying winds threatened to bring down limbs and power lines. Area schools were closed along with most courts and government offices; the public transportation system, called Marta, discontinued service for the first time in its history.