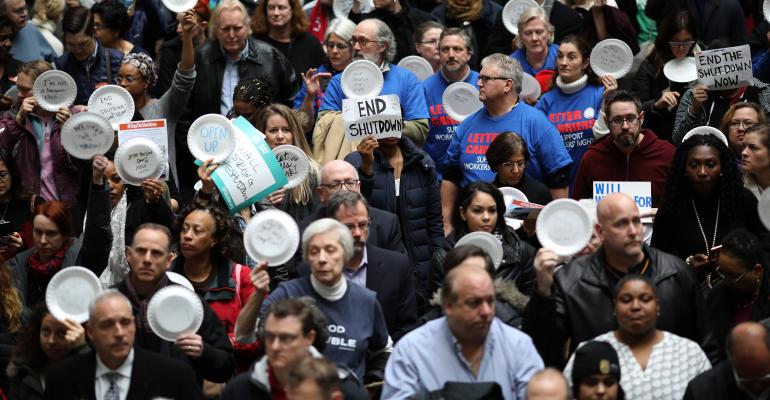 How the CRE Industry Can Rise to the Potential Challenge of a Government Shutdown 2.0

If federal workers are furloughed once again and cannot pay their rent, compassion is what is called for.

For those keeping score, we had just passed the one-month mark in the so-called partial government shutdown when a cease-fire was called across political lines. At this writing, it’s being termed a temporary move, which implies that in short order, we’ll be hearing canon fire once again from inside the Beltway. Think: “Government Shutdown 2.0.” Or, the two warring factions could once again fool us, and we will have achieved an uneasy peace. For now, let’s hope for the best, but assume the worst.

We’ll leave the wrangling of our two major political parties out of this (primarily, because I don’t like using that type of language in public) to focus more on the upshot not only for the public sector, but the private sector as well, of the shutdown to date.

Much of the consumer news coverage focused, it seems, on the chaos at airport security, particularly, in these run-up days to the Super Bowl, at Hartsfield-Jackson International in Atlanta. Much less coverage was focused on the hardships faced by occupants of our nation’s commercial and residential buildings, a concern that weighs heavily on the responsibilities of property managers and landlords.

But the impact there is real.

As NREI reported on January 16, some 95 percent of HUD workers have been furloughed and only some field offices are operating. As a result, “rental assistance contracts that expire won’t be renewed until the agency reopens,” the article stated.

The article then went on to quote Savills Studley Chief Economist Heidi Learner: “I don’t think it has any impact on valuations, but in the short term it could make operations for some of the private owners of rental housing, whether it is for low-income citizens or the elderly, a little more challenging.”

(By the way, while a Shutdown 2.0 might not impact valuations, it is sure to impact consumer confidence, the main artery leading to the heart of a robust economy.)

Expired rental assistance contracts resulting from the shutdown counted out to 1,150 with private owners. According to Businessweek, HUD says that these contracts, which expired at the end of last year, represented some 40,000 low-income households. In February—if the shutdown is fired up again—you can add a stack of 16,000 more to that pile.

Not surprisingly, any long-term shutdown is bad for the goose (commercial), as much as for the gander (residential). Commercial landlords are likely to suffer from a dearth of monthly rental payments. Businessweek puts the potential monetary toll at $460 million per month. According to its report, “The law prevents landlords from evicting federal tenants; their only recourse is to sue.”

But there was a bright side to this madness, and it came, not surprisingly, from outside the Beltway—and within the real estate industry. One such example was the Hotel Association of New York City, which according to Hotel News Resource, quite literally opened its doors to furloughed government workers. The move was particularly aimed at workers who needed to travel to the city for personal emergencies.

As HANY President and CEO Vijay Dandapani put it in the association’s press statement: “We don't want to see anyone who needs to be here turned away because of financial hardships created by the government shutdown. Whether it's a family situation or a health issue that requires people to travel to the city, we will do what we can to provide accommodations on a limited basis to those in dire need."

I’m placing my bets on our industry. If indeed the political powers that be decide once again to activate a shutdown—now or over some future debate—we will, as an industry, rise to the challenge once again.

For landlords understandably eager for payment, the Businessweek solution of lawsuits was certainly a definitive move, if not expeditious (remember, you’d be dealing with the court system). Should we be plunged once again into a shutdown, IREM believes that compassion more than a hard line is what is called for, and we urge our members to put themselves into the position of those in our charge who might once again hit upon hard times.

A “Closed for Business” sign hanging on our governmental institutions at this writing remains a real threat to the American people. But it cannot last forever, even if it means only that our political leaders will move beyond this tantrum and find other toys to break. This too shall pass. Given the thick-headedness evident on both sides of the Congressional aisle, the only question that remains is when.